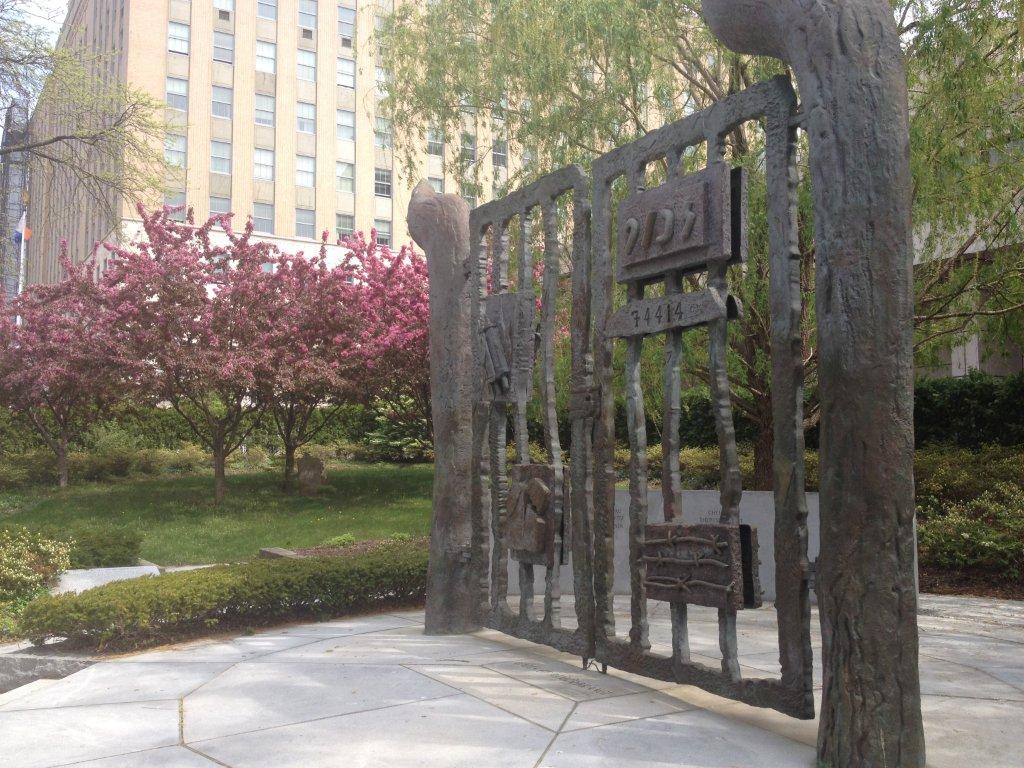 The Garden of Remembrance, located on Martine Avenue in White Plains, was created by the Holocaust and Human Rights Education Center.

The outer gates to The Garden of Remembrance Memorial located on Martine Avenue next to the Westchester County office building in White Plains were discovered to have been vandalized Tuesday, the eve of Yom Kippur, a high holy day for the Jewish faith. It is believed  by police investigating the incident that the act may have been done on Monday.

The memorial was built in 1990 by the Holocaust and Human Rights Education Center and is a County Park facility on County Land.

Westchester County Executive George Latimer said during a press meeting Wednesday that the anti-Semitic stickers and posters were, “Very clear, very graphic and very insulting. It was meant to shock, it wasn’t something subtle. A purposeful act of hatred.” Latimer would not describe the exact content of  the message or the graphic, but did say the material could be found and printed from the Internet.

“For this to be the site of an act of hatred is particularly heinous, and for it to happen on the day which is the most solemn day on the Jewish calendar is really a statement being made by the person who did this,” Latimer continued.

Latimer further said there would be an interfaith vigil at the memorial Thursday, Oct. 10 at noon. “We will stand there as representatives of the Westchester community to show solidarity. What has made this country stronger over many years is that people of different faith backgrounds, different ethnicities  … have contributed to the economic engine of this country, to the intellectual capacity of this country. … When hatred manifests itself in this fashion we will both pursue the person that sponsors that hatred and if there is a basic method to bring that person to proper prosecution, we will do that.”

County Police in cooperation with the White Plains Police Department are actively investigating and reviewing video of the area. There are numerous cameras around the government building.

White Plains Mayor Tom Roach said, “The hate crime discovered  at the Garden of Remembrance Holocaust Memorial is a chilling reminder that ignorance and hate know no boundaries. Our police department is working with the Westchester County Police and other police agencies to investigate and apprehend the individuals involved. In the interim we stand together as one city, one community, against these senseless acts and those who perpetrate them.”

Millie Jasper, executive director of the Holocaust & Human Rights Education Center, who came to witness the desecration said, “Antisemitism is rising in Westchester County, New York State, the county and in the world, and I am very upset to be here today about this.”

“I am disgusted by the desecration of a Holocaust memorial in White Plains on the eve of Yom Kippur, the holiest day on the Jewish calendar,” Governor Andrew Cuomo said in a statement. “More than 74 years ago the entire world reeled in shock, horror and sorrow over the senseless murder of more than six million Jews – mothers, fathers, children, grandparents, uncles, aunts, friends and neighbors. Vandalizing a memorial lovingly built in their honor is a revolting and cowardly act, and I have directed the State Police Hate Crimes Task Force to offer assistance to local authorities investigating this heinous act to ensure those responsible are held accountable. On this day of atonement, I join with New York’s Jewish community in remembrance of the lives lost and I pray for love, peace and understanding. Hate has no place in this state.”