Politics The Examiner
August 15, 2022August 19, 2022 Bailey Hosfelt westchester
We are part of The Trust Project

Two years ago, Rep. Jamaal Bowman (D-Yonkers) ousted longstanding Democratic congressman Eliot Engel in the race for New York’s 16th Congressional District, a significant victory for the party’s progressive contingent. Now, the freshman congressman faces three opponents vying to unseat him in the Aug. 23 Democratic primary. Westchester County legislators Vedat Gashi (D-Yorktown) and Catherine Parker (D-Rye) are each hoping their political experience will translate well to serving in Congress. Another candidate, Mark Jaffe, is also on the ballot but suspended his campaign on Aug. 8 in a Facebook post.

The district includes White Plains, lower Westchester and portions of the Bronx.

Endorsed by various local labor unions, associations, and prominent local political leaders, Gashi is an attorney who graduated from Lakeland High School in Yorktown. Last November, Gashi was elected to a second term on the Board of Legislators representing New Castle and portions of Somers and Yorktown. If victorious, he would move to the district.

Born in Kosovo, he came to the United States at four years old with his family as political refugees. After passing the New York State bar exam, Gashi helped draft some of the then-newly-formed state of Kosovo’s foundational legal documents and establish its Ministry of Local Government Administration.

“The fact that I’ve worked on drafting legislation abroad does give me an understanding of the process and the capacity to do it,” Gashi said.

While the district leans heavily Democratic, Gashi believes running for office out of Yorktown – a decidedly purple part of the county – provides him with good experience to collaborate with Democrats and Republicans.

“I think there’s a tendency to only talk with each other and not worry about communicating our points of view or convincing the other side,” Gashi explained. “That’s not the way I would choose or the answer to moving (the country) forward together.”

First elected to the county legislature in 2013, Parker was re-elected to a fifth term last year, representing Mamaroneck, Rye, Larchmont and parts of New Rochelle and Harrison. A Fox Lane High School graduate, Parker served six years on the Rye City Council and was a small business owner for 23 years.

Endorsed by current and former local elected officials, Parker said her experience and deep roots in the district will position her well to serve in Congress.

“We need somebody strong to really stand up for our communities and fight to represent us in Washington,” Parker said. “I’m going to fight on the issues that we care about, whether it’s affordability and helping return us to a full SALT deduction or infrastructure dollars coming in (to address) the climate crisis and flood mitigation.”

Bowman said the vision he has had for the district coupled with the achievements he’s made during his freshman term sets him apart from his two opponents.

“Since I began my first term in Congress, I’ve brought hundreds of millions of dollars directly back to this district to invest in our towns and communities,” Bowman said. “I’ve worked to ensure vaccination sites were open and accessible in the district. I brought in much-needed money and resources into the district following the devastating effects of Hurricane Ida and I also passed legislation condemning white supremacy.”

With the economy top of mind for many voters due to high gas prices, inflation and the pandemic, Bowman believes the nation needs a new foundation.

“Poverty and economic difficulties are here by design,” he said, highlighting that billionaires have gotten richer during the pandemic while the working class fell behind. “Corporate profiteering is increasing inflation, and it is preventable.”

Bowman said Congress needs to pass his Babies Over Billionaires Act, which would tax the unrealized capital gains of the top .01 percent of taxpayers with more than $100 million in assets.

“America has a two-tier tax system: one for millionaires and billionaires and one for everybody else, which includes all of us struggling to pay for basic needs including food and housing,” Bowman said. “To counteract inflation sticker shock, prices for necessary goods should be controlled instead of the customer paying for inflated prices just to pad the company’s profits.”

Additionally, Bowman would like to see President Biden make good on his promise to cancel student debt, which would provide opportunities for 46 million Americans.

Gashi said that while there is no magic bullet to improve the country’s economic outlook, he believes it will take sober reflection to make changes to positively impact people’s lives.

“I think it’s important if we can pay attention to the sorts of levers that’ll help people’s lives – even if it’s going to be just a little bit,” Gashi said, citing the federal gas tax holiday as one example. “Oftentimes we’ll lose focus because we can’t keep everything at the same time. My answer is usually let’s achieve what we can and then move on to the next thing so we can actually get change.”

Parker sees infrastructure dollars as important to fight against climate change and give the local economy a boost.

“Having projects where we’re focused on helping companies and homeowners retrofit for renewable energy will give opportunity to put people to work,” Parker explained.

She would also like to see the full SALT deduction returned to homeowners, which would help everyone from young families to the elderly.

“I see it as tax parity as well as just good economic policy,” Parker said.

In addition, she noted that the federal government needs to do more on affordable and low-income housing for Westchester residents.

“We have to recognize that we have a shrinking and almost missing middle class,” Parker said. “If we can connect the two needs – housing and infrastructure dollars – and get people working, I think that we will be able to achieve so much to help increase the social safety net for families and reduce the trauma and stress from poverty, which is oftentimes driven by systemic racism.”

Regarding flooding, Gashi would work to bring additional federal money to the county to address vulnerabilities due to climate change. Parker agreed that more money is necessary.

“Flood mitigation projects are in the multimillions, and no municipality can fund that just based on property taxes,” Parker said. “It’s unfair to think that even the wealthiest communities within Westchester should have to go at it alone.”

Bowman said he has been working on numerous environmental protections and will continue to do so through flood mitigation projects, environmental justice efforts and sponsored legislation to handle extreme weather events.

With the recent overturning of Roe v. Wade and Justice Clarence Thomas’ indication that other rights may be re-examined, Bowman said codifying marriage equality, access to contraception in federal law and passing the Women’s Health Protection Act are crucial. He also wants interracial marriages protected.

“We must operate under the assumption that no rights are safe,” Bowman said, highlighting that he would also like to see the U.S. Supreme Court expanded.

While Democrats and Republicans may disagree about abortion protections, Parker said cybersecurity is one area where the parties could collaborate.

“I think it’s important that we codify Roe v. Wade in the Constitution, but if we can’t do that, we’re going to have to look at all types of legislation where we can help embed protections for a woman’s right to choose,” Parker said. “One of the issues that I think is important is cybersecurity protections for the apps that women use to track their menstrual cycles and ride sharing apps, which somebody may take to go to an abortion clinic out of state.”

Gashi said that an extremist Republican Party has been pushing a view that isn’t shared by the vast majority of Americans.

“Abortion is healthcare, and access to healthcare is a human right,” Gashi said, noting that New York has made significant progress in protecting abortion access.

Now, he said, Congress has an opportunity to pass an amendment to protect abortion nationally.

On the campaign trail, Gashi has expressed disagreement with some of Bowman’s votes, namely his opposition to President Biden’s $1.5 trillion bipartisan Infrastructure Investment and Jobs Act because Bowman felt it didn’t do enough to increase social safety net funding. The bill passed regardless.

“He thinks he represents an ideology and seems to dismiss the needs of the people in this district,” Gashi said.

Bowman said that while he always supported President Biden’s infrastructure plan, he didn’t support abandoning Build Back Better and endangering some of the most critical parts of Biden’s agenda and investments for the district as a result.

“In NY-16, we consistently see horrible flooding after rainstorms. We must respond by investing big on combating climate change,” Bowman explained. “That’s what Build Back Better would have done, which is why I and many other Democrats were committed to passing the entirety of President Biden’s agenda together through both Build Back Better and the bipartisan infrastructure framework.”

Because conservative Democrats, namely Joe Manchin, insisted on separating the two, Bowman said he and other progressives voted against it.

Bowman highlighted that the Jan. 6 attack on the Capitol wasn’t caused by lack of funding but rather a lack of preparation and intelligence sharing.

“I voted against the supplementary bill because we must learn from the mistakes of our past and seek holistic solutions to public safety instead of writing a blank check to police departments,” Bowman explained, adding that the bill excluded other Capitol employees such as cafeteria and janitorial staff, despite his asking for that funding to be included.

“His vote against the infrastructure bill speaks to not understanding how we need to all be working together,” Parker said,

She added that his positions related to Israel is out of step with the district’s Jewish voters and policy that protects American security.

“Positioning himself on a soapbox with The Squad I don’t think serves our community well,” Parker said.

Having worked in local government when Democrats were both the majority and minority, Parker said she knows how to get things done and will be a good team player in Congress.

Gashi said he’s a product of the American dream and is ready to do the work if elected to Congress.

“As a former undocumented immigrant who didn’t speak English, I never thought running for Congress would be something that I’d be capable of doing,” Gashi added. “It’s something that I’ve proven that I can do, and I feel compelled to do it.”

Bowman said the country must invest in people and families, and that’s what he’s spent his first term in Congress delivering on for his constituents.

“Voters believed in this vision for our district enough to elect me once, and I have confidence they will make the right choice for this district once again,” Bowman said.

The winner of the Democratic primary will run against Republican attorney John Ciampoli in November. The district has not had a Republican representative elected to Congress since 1949.

Not All Gloom and Doom: Post-Irene Biz Booms for P’ville 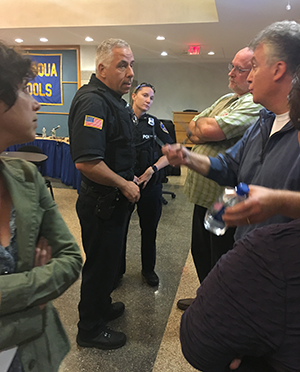 Board Walks Out, Cops Called In at Tense Chappaqua School Meeting