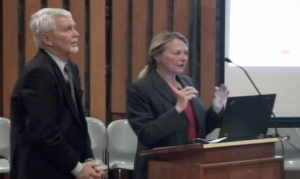 Consultants Dr. Dale Mann and Betsey McKean presented financial information and three potential options to the Bedford Board of Education as trustees grapple with whether to shut any of the district’s elementary schools.

The Bedford Board of Education was presented last week with three options to consider as district officials weigh the possibility of a difficult fiscal picture, continued enrollment decline and the prospect of elementary school contraction.

Dr. Dale Mann and Betsey McKean of Interactive Inc., an education-related consultant firm retained by school officials, reviewed Bedford’s financial projections report at the Feb. 5 board meeting, estimating that a district budget deficit could appear during the 2021-22 school year.

McKean and Mann then presented the board with three different scenarios related to the future of the district’s five elementary schools, and the gap between revenue and expenditures for each. Mann prefaced his comments by saying they are “not making recommendations.” District officials are considering whether to close up to two of the elementary schools.

The first option was to continue operating all five of Bedford’s elementary schools with changes to operations. Mann and McKean estimated that would trigger a $7.6 million budget gap by the 2023-24 school year for the district.

A second option would be to continue operating all elementary schools with savings coming through teacher attrition. By 2023-24, there would be a $5.4 million budget gap.

The final option presented to the board was to eliminate one elementary school in addition to teacher attrition. By year four, there would be a $4.1 million budget deficit. That figure is calculated with the savings from closing a school, which Interactive estimated to be $1,655,345.

After presenting the three options, McKean discussed the financial obstacles that Bedford is facing. In 2011, New York State imposed tax caps on school districts and local governments. Last month, the state lowered the school tax cap levy for 2020-21 from 2 percent to 1.81 percent, further constraining the district’s ability to raise revenue.

Mann and McKean also reviewed the projected costs of maintenance and repair on all of the elementary schools, a report completed by the district’s architects, accounting for mechanical, electrical and plumbing repairs. According to those estimates, Pound Ridge Elementary School saw the highest cost repairs at an estimated $5.8 million followed by Mount Kisco Elementary School at $5.5 million.

In Interactive Inc.’s Facilities Utilization Report last week, it was noted that there is available space in the elementary schools that could accommodate changes in the district’s operations while honoring the district’s teacher-to-pupil ratio guidelines. The consultants visited all the schools last summer and documented classroom size and utilization.

Among the five elementary schools, there are currently 40 spaces that aren’t used for instruction that could be used as classrooms. The additional spaces are the result of the district’s declining enrollment since 2013-14.

“We’re trying to focus on the options that are feasible,” Mann told the board after the presentation.

The ensuing public comment period once again was filled with parents vehemently opposing the closure of any schools within the district.

This week, the board is holding additional community forums and plans to reveal to the public the cost of operating an elementary school, three-year budget estimates and a report on community feedback.

Interactive Inc. plans to present its recommendation to the board at the Mar. 4 board meeting. Plans call for the board to adopt the final Long Range Facilities plan by June.