The Yorktown Town Board appears close to making a change in the Zoning Code that could pave the way for two proposed boutique-style hotels to move forward in the planning process. A public hearing was held last week on a proposal to allow hotel uses in the recently established Yorktown Heights Overlay District through a special use permit.

However, most of the public comment centered on a three-floor hotel called Hotel Gardena, which, if approved, would be built on about a third of an acre of land at the corner of Veterans Road and Commerce Street, adjacent to Albert A. Capellini Community and Culture Center where a real estate office has been located for years.

Project plans, which first surfaced in late 2020, call for a 16-room hotel, with eight rooms, including four suites, on both the second and third floors ranging from 340 square feet to just over 500 square feet. The first floor would see a lobby, lounge and café, which would offer outdoor seating along Veterans Road.

In addition, plans call for a rooftop bar and grill that would allow for both indoor and outdoor seating.

Hotel Gardena attorney and former Yorktown Supervisor Michael Grace reminded the Town Board the change to the Overlay District “is only providing the framework” for an application to be made.

But Grace, who advocated the revitalization of Yorktown’s downtown during his administration, maintained Yorktown’s Town Code “has been an anchor on this town for years.”

“If we constantly overthink these things, we get stymied,” Grace said. “You have to have the courage of your convictions and have a vision.”

Another former town supervisor, Susan Siegel, noted besides Hotel Gardena, a regional inn was being proposed as part of the Underhill Farm project on Underhill Ave.

“I definitely like the concept,” Esposito said. “This potential law could lead to some sort of revival of our downtown district.”

“We need the hotel. I think we should go for it,” Kopstein remarked.

Supervisor Matt Slater suggested holding off on the Town Board making a decision until it could consult with the town’s attorney and planner.

“I want to make sure we are as close to perfect as we can be,” he said. 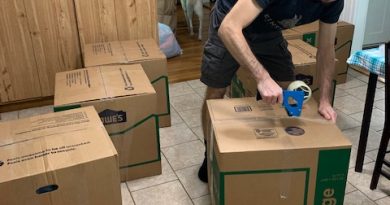 As Ukraine Braces for Winter Yorktown Man Gets Coats to Kids