Gov. Andrew Cuomo announced on Friday that two more cases of the United Kingdom variant of COVID-19 have been confirmed in Westchester County.

Westchester now has three known cases, Cuomo said, with the county reporting its first case last Sunday. It is currently unknown the age, residence or gender of the individuals who tested positive for what’s deemed a more contagious strain of the virus.

However, County Executive George Latimer said earlier this week the first case was located in northern Westchester. To date, there are 25 confirmed cases of the variant in New York State.

“The new strains are frightening,” Cuomo said. “The U.K. strain has been spreading, and it should have never been here.”

Due to the aggressive spread of the virus, the United Kingdom has been under lockdown since mid-December. The Centers for Disease Control and Prevention now requires all passengers flying from the United Kingdom to the United States to test negative for COVID-19 prior to boarding.

Health officials warn that the new variant is up to 70 percent more transmissible than earlier versions of the virus, but there is currently no evidence showing the new variant causes more severe illness or increased risk of death. It is also suggested the U.K. variant will likely become the dominant strain circulating domestically by March.

However, like the coronavirus, the CDC asserts that an increase in cases will put more strain on health care resources, lead to more hospitalizations and potentially more deaths. Officials are also weary of other strains deriving from South Africa and Brazil.

“What’s concerning now is the emergence of three new frightening strains of the virus which could send those numbers back in the other direction,” Cuomo said. “As we have done throughout this crisis, we will continue to monitor these strains closely, follow the science, and continue our work to vaccinate New Yorkers as quickly and fairly as possible.”

On Jan. 4, Cuomo announced the state’s first case of the U.K. variant had been confirmed in a 60-year-old man from Saratoga County. The individual had no known history of travel when he tested positive.

In recent weeks, the virus has since been detected in Brooklyn, Nassau County, Tompkins County, Suffolk County, Queens, Manhattan, and Warren County.

Here are the latest updates on Jan. 23 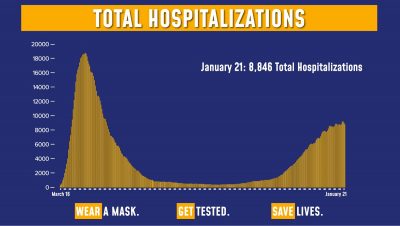 Coronavirus Cases in Westchester County increased by 924 on Friday, bringing the total number of positive cases to 87,570 since the start of the pandemic.

There are now 11,481 active cases, state data shows, an increase of 11 over the previous day. The county’s daily positivity rate is 6.78 percent, with 13,629 tests administered on Wednesday.

Overall, there have been over 1.67 million COVID tests dispensed in Westchester since March.

The county reported eight more deaths, bringing the death toll from COVID-19-related fatalities to 1,832 since March. This week 43 people have died from the virus, with 157 overall fatalities since the start of the new year.

As of Thursday, there are 567 virus patients in Westchester hospitals.

The county currently has 1,197 active cases.

There have been 75 coronavirus-related deaths in Putnam since the start of the pandemic. There were no new deaths reported on Friday.

The state recorded 165 additional COVID-19-related fatalities, bringing the death toll to 33,763 since March.

Statewide hospitalizations stand at 8,846, a decrease of 209 over the previous day. Across New York there have been 1,300,481 positive coronavirus cases since the start of the pandemic, according to the state tracker.

“We are in a war with COVID and as I’ve said time and again, winning this war will mean winning the footrace between how fast the infection rate goes up and how fast we can vaccinate New Yorkers,” Cuomo said. “Positivity and hospitalizations are both down, which is good news, but it in no way means we’re out of the woods.”

On Friday, Cuomo said the state was expected to run out COVID vaccines by the end of the day. Since vaccinations started five weeks ago, the federal government has allocated over 1.3 million doses to New York, Cuomo said, however the supply has dwindled in recent weeks.

The state was receiving an average 300,000 doses a week, but that figure has since dropped to about 250,000 despite the number of eligible individuals vastly increasing. There are currently seven million residents entitled to receive the vaccine under Phase 1A and 1B.

While the sixth week of injections are currently en route, Cuomo advised providers to only schedule appointments for allocations they know they will receive. He warned not to put patients in a position where their appointment will be canceled due to limited supply.

Cuomo added that those who received a first dose and have an appointment for a second dose must be honored.

With President Joe Biden promising to produce 100 million dosages during his first 100 days in office, Cuomo said he’s hopeful the state’s supply would increase to about 420,000 doses a week, but he noted it would still take about 17 weeks to vaccinate all those eligible before moving on to the next phase.

“All this to say, this is going to be a long several months in distribution of this vaccine and the anxiety that has been created,” Cuomo said. “I’m hopeful that the Biden administration can figure out how to increase production and shorten that 17 weeks.”

Click HERE to see if you’re eligible to receive the vaccine.