A lifelong Putnam County resident with 30 years of law enforcement experience last week launched his campaign for the position of Putnam County Sheriff.

Kevin McConville, 63, who resides in Cold Spring, kicked off his effort Feb 4. on the steps of the Putnam County Courthouse and will be seeking the endorsement of the Republican and Conservative parties in his bid to unseat incumbent Robert Langley, Jr.

This is the third time McConville is running for sheriff.

“It is time to have a responsible, accountable and efficient law enforcement leader, one that manages the budget, and the Department,” McConville said. “The role of the sheriff is not about politics, it is a hands-on job that requires the knowledge of how a law enforcement agency works and how to do it effectively and efficiently, provide support and training to your personnel and excellent service to your communities.”

“I support, without hesitation, the men and women of law enforcement. Let’s give our deputies and corrections officers a leader, one who isn’t afraid of transparency and fiscal accountability,” he continued. “Training, resources and assets are a large part of that support. So is leadership; providing a mission and goals allows deputies and corrections personnel to fulfill the Department’s job. As my good friend, Dutchess County Sheriff, Butch Anderson, says, ‘treat others as you want to be treated.’ That is a promise we will uphold in the Putnam County Sheriff’s Department.”

McConville retired in 2008 as Chief of the Metropolitan Transportation Authority (MTA) Police Department, where he oversaw a 770-member force with a $100 million budget. During his tenure as Chief, he created the Interagency Counter Terrorism Team to address Terrorism, working with the FBI, members of the Joint Terrorist Task Force (JTTF), and numerous law enforcement agencies throughout the Hudson Valley to ensure the safety of commuters, including those using MetroNorth.

In addition, McConville served as a member of the Governor’s Homeland Security Team and developed and implemented plans and strategies to prevent bombings on commuter rail systems, like the ones in London and Madrid. For the past twelve years, Kevin has served as Director of Security Emergency Management at a local healthcare facility.

McConville, who has bachelor’s and master’s degrees from Marist College, thinks the race for sheriff should focus on ideas, law enforcement experience, effectiveness, responsibility and accountability to the taxpayers.

“Who is going to do a better job for the Sheriff’s Department from today forward should be the focus of this campaign,” said McConville. “The sheriff is the chief law enforcement officer in the county, so you have to work well with everyone and have everyone on the same page with your agency. More can be accomplished by working together because simply put, we are better together.”

“I have been at the head of one of the states’ largest law enforcement agencies,” he added. “You have to be accountable, responsible and able to work with everybody. [The MTA police] worked with everybody—local and county police departments as well as state and federal agencies, during my time as chief.” 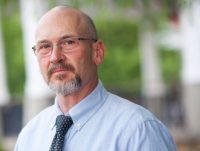 Langley, Jr., a Democrat, is seeking a second four-year term in November.

“Safety is and must remain my number one concern” Langley said when announcing his candidacy last month. “In 2017, I promised to communicate with the public and institute true community policing. Putnam’s crime statistics prove that this approach works and works well.”

Langley was raised in Carmel and graduated from the Mahopac Central School District. He resides on a small farm in Garrison and is the founder and president of a private security company serving commercial and residential clients.

He served in the Putnam County Sheriff’s Office from 1984 until his retirement in 2007. As a deputy, Langley served as a criminal investigator assigned to forensics and identification, as a member of the K-9 unit, and as a training officer in emergency communications. He served in the Mahopac Volunteer Fire Department for 14 years, four as a line officer; seven years in the Garrison Volunteer Fire Company, five as line officer and two as chief; and two years in the Continental Village Fire Department in Philipstown.