For the past three years, Holly McCall has been serving on the Chappaqua Board of Education and is currently its vice president. She wasn’t thinking about running for New Castle supervisor in 2021.

But when Supervisor Ivy Pool decided against running for re-election in mid-winter, McCall looked at the possibility to help the community in a new way during a challenging time.

“I started to think, especially in light of some of the tension between the school board and the Town Board during the last year, I felt it was kind of a unique opportunity to make that bridge and maybe, hopefully, repair some of the relationship that was less than ideal the past year,” said McCall, whose school board term expires at the end of the month.

The biggest factor in that less-than-ideal relationship can be traced to the two entities’ differences regarding the Form Based Code. One of the key issues the school board focused on were the impacts of a full-buildout scenario on future enrollment and its effect on taxes. The town was obligated to present that scenario under the mandated state environmental review process of the 72-acre study area.

McCall, 43, who formerly worked for a financial services company, said she had concerns about the volume of potential changes to the downtown at the start of the process, but in January, when the Town Board announced it was limiting the scope of potential rezoning to the six acres along North Greeley Avenue, her concern waned.

She said that the stretch from the former Rite Aid space and its parking lot to the old Maxine’s is the area of greatest need, and the Form Based Code represents the town’s best opportunity to jumpstart revitalization there.

Critics who want to limit the environmental study to North Greeley would disregard too much information and input from the community, she said. McCall added that she doesn’t see the risk to completing the environmental review for the full 72 acres. She would be opposed to considering further expansion without highly extensive community engagement as well as a proof of concept in the six-acre area.

“There’s a proposed change to the zoning and change can be very scary, and in the middle of a pandemic, where people, I’d say, were a little bit on edge, when this was announced,” McCall said. “For people who aren’t the insiders or following the details, it might not have been clear that this was coming out of the Comprehensive Plan and it is, in fact, what was envisioned for the Chappaqua hamlet.”

Communicating with residents, understanding where the concerns remain, providing accurate information and clearing up misconceptions about the Form Based Code will be officials’ task moving forward, McCall said.

She is confident that it is a plan that will help the town achieve a greater mix of housing for new residents, including families, who don’t want to or can’t initially afford a large down-payment on a house, she said.

Helping Millwood realize its potential will be difficult without connecting to public sewers. McCall said lobbying the county to consider hooking up with its lines and aggressively seeking grant money is a critical long-term goal to bring sewers to Millwood.

McCall said the Chap Line, the proposed pedestrian path that would connect the area near Chappaqua Crossing with downtown, would be a major step forward to make the town a more safely walkable community. It would also prevent some people from getting into their cars for short trips within town. However, the town must find mostly outside money to complete the project, now estimated to be as high as $10 million.

Understandably, many residents want more sidewalks and the town’s comprehensive sidewalk plan will help provide direction on how to accomplish that, McCall said.

The Town Board must continue to address the needs of Millwood and the West End, and McCall suggested to have separate advisory boards for each. It is also the responsibility of each board member to be involved in and visible in those areas as well.

The town’s Recreation and Parks Department and the volunteer commission are in the midst of formulating a master plan for the town to consider additional recreation opportunities. McCall said she would explore the feasibility of a town pool, where residents throughout town can congregate. It was one of the recommendations from the town’s Council on Race and Equity (CRE).

“I think it’s truly a benefit to a community to have a central recreational space where really everyone can be,” McCall said.

McCall said the CRE, which will be a permanent town committee, provided outstanding recommendations and it will be up to town officials to allocate the funding for its program recommendations. Although it will take time, there are immediate steps such as having more diversity on volunteer boards.

“I think if you don’t make it something that you constantly think about and address, you will risk losing the progress that you’ve made,” McCall said.

Having served on the Chappaqua Board of Education for the past three years, McCall said that as supervisor she would be in a strong position to bridge differences between the town and school district, including promoting sharing of services.

The most apparent would be for the town to share fields and facilities, she said. Another idea could be to explore trash collection and to work with the town’s Sustainability Advisory Board to help the district limit waste generation.

“I think that there’s a lot of overlap in mission, too, sometimes and starting with more sharing and collaboration, I think, is a really good place to start,” McCall said.

McKenzie for Mayor; Agudelo, Brown, Fernandez for Council in Peekskill 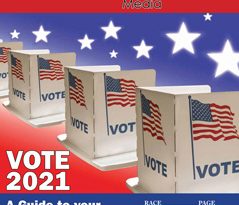