An organization representing the interests of convenience store owners called on the Board of Legislators last week to abandon a proposed law that would prohibit the sale of flavored tobacco products and menthol cigarettes in Westchester.

Members of the New York Association of Convenience Stores, which represents about 450 businesses in the county, warned of the potential sharp decline in sales that could threaten those establishment and the livelihood of the roughly 5,600 employees who work there.

Association President Kent Sopris said while the stores were able to navigate the pandemic, this proposal could be more detrimental to their survival. To make matters worse, there are 906 establishments in neighboring counties that are easily reachable, he said.

He said each convenience store in Westchester generates about $92,000 in revenue a year on average.

“After COVID starts to abate, we were hit with historic inflation,” Sopris said. “My members are working hard to stay afloat and serve the public. The county legislature is doing nothing more than adding to the burden of small businesses in Westchester County.”

The organization held a press conference last Thursday at Chestnut Market on Route 6 and Baldwin Place in Somers, across the street from two other gas stations and convenience stores. However, the two other stores are in Putnam County, which would not be affected if Westchester County lawmakers approve the measure.

Faheem Jamal, the director of c-store operations for Chestnut Market, said the company has 30 locations in Westchester, employing nearly 200 people. He estimated that at least 25 percent of its staff would likely be laid off because of the hit the stores would take in revenue.

Furthermore, it would invite bootleggers to bring in cigarettes to the county and sell them illegally, defeating the purpose of the law, which is to protect people’s health, Jamal said.

“With that being said, the ability to drive across county borders is abundantly clear, especially at this location with two gas station-convenience stores sitting in Putnam County less than 200 feet away from us,” he said.

County Legislator Jewel Williams Johnson (D-Greenburgh), who introduced the bill as chair of the board’s Health Committee, said she was motivated to propose the legislation after hearing Dr. Philip Gardiner speak on the scourge of tobacco use. Gardiner is co-chair of the African American Tobacco Control Leadership Council, a group of Black professionals dedicated to fighting tobacco’s use in communities of color.

But it is children who are often targeted the most by the candy, fruit or mint flavored tobacco and get hooked.

“The most eye-opening thing for me was how flavored tobacco is used as an enticement and the National Youth Tobacco Survey indicated that over two million kids throughout the country are using tobacco products, and that a very high number of them started and are attracted because of flavored products first,” Johnson said.

She also cited statistics from New York State estimating that tobacco is responsible for more than $17 billion a year in healthcare expenses and productivity loss.

The bill was recently released out of the Health Committee and a public hearing has been scheduled before the full Board of Legislators on Nov. 14 at 7:30 p.m.

County Legislator Margaret Cunzio (C-Mount Pleasant) said she is torn over the proposal. As a fitness professional, she understands the health dangers of tobacco use, yet she has concerns about the bill.

First, Westchester has the lowest percentage of adult smokers in the state, Cunzio said, at only about 7 percent. Therefore, it may not make much of a difference.

Another issue is the law does not cover internet sales, which could defeat the intent of the legislation, she said. Cunzio mentioned that she can see both side of the issue. She will listen to the public with interest in about two weeks.

“I will tell you one thing – this is not a partisan issue because I do know for a fact that there are people on both sides that are seeing the value that both sides bring,” Cunzio said. 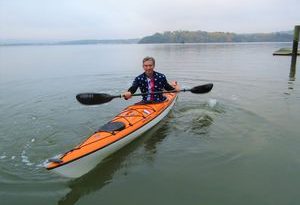 Man on 800-Mile Trek to Promote Trail Traveling Through Area