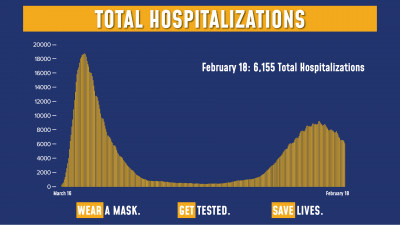 During a press briefing on Friday, Latimer urged eligible folks in phases 1A and 1B to get vaccinated, pressing there is currently no other way to end the pandemic. He described the vaccine as the medical community’s ticket back to normalcy and chastised those making excuses not to get inoculated.

“I’m frustrated that there’s still an unwillingness of people to do what we know is the logical thing to do and we go out of our way to find excuses for not doing it,” Latimer said. “The path out of the pandemic leads through vaccinations and making yourself less vulnerable to getting the disease in the first place.”

But until everyone is immunized, he said it’s imperative the numbers don’t spike again like they did during the holiday season. Latimer added that officials are encouraged by the current reduction in infections, fatalities, and hospitalizations over the last month.

However, he asserted that the county has been in this position before only to see the trajectory change.

“Our behavior is critical here,” Latimer said. “The numbers are getting better but not better enough for us to drop our guard.”

Coronavirus cases increased by 487 in Westchester County on Friday, bringing the total number of positive cases to 103,506 since the start of the pandemic. There are now 7,041 active cases, an increase of 11 over the previous day, state data shows.

Earlier this week active cases fell below 7,000 for the first time since early December. This is the third consecutive day active cases have climbed.

The daily positivity rate is 4.40 percent, with 11,060 tests administered Wednesday, according to the state tracker. Overall, more than 1.97 million COVID-19 tests have been dispensed in Westchester since March.

Three more deaths were reported on Friday, bringing the COVID-19-related death toll to 2,045. There have been 23 virus deaths this week, with 369 since Jan. 1.

“In terms of the numbers and trends, the number of fatalities per week have been dropping (and) we’re almost at the point where we are half of the population of fatalities than we had two weeks ago,” Latimer said. “Obviously, nothing will suffice until we hit zero.”

While the weekly fatality rate has decreased, Latimer stressed that 25 percent of virus-related deaths have occurred since Thanksgiving. He attributed the rapid influx in deaths to public gatherings and folks defying state guidelines.

“You cannot deny that we’ve had a rapid increase in the number of fatalities since Thanksgiving Day at a time when we had almost no public activities, but private behavior pursued whatever direction it pursued,” Latimer said. “And maybe the people at the party didn’t die of COVID but they got COVID and they passed it onto someone else who had an underlying illness who suffered.”

There are currently 403 virus patients in Westchester hospitals, another decrease since hospitalizations neared 600 earlier this month.

Active cases have reached 559, a decrease of nine over the previous day.

One new coronavirus-related death was reported, increasing the death toll to 86 since the start of the pandemic, state data shows. There have been two virus deaths this week, and 18 fatalities recorded in 2021.

Statewide there were 8,710 new positive cases on Friday, with the daily positivity rate clocking in at 3.49 percent.

There were 116 additional COVID-19-related fatalities, bringing the death toll to 37.675.

Statewide hospitalizations stand at 6,155, a decrease of 279 over the previous day, and the lowest since Dec. 17. Across New York there have been 1,564,483 positive coronavirus cases since the start of the pandemic.

New York’s health care distribution sites have received 2,335,250 first doses and administered 92 percent of those or 2,147,076. Eighty-eight percent of first and second doses have been dispensed.

The Westchester County government has directly administered 53,803 vaccines to eligible residents since the County Center became a distribution site on Jan. 13. The county health department and Westchester Community College sites have inoculated about 9,707 individuals, as of Thursday.

Click HERE to see if you’re eligible to make an appointment.

New York Has Lowest COVID Positivity Rate in the Nation; Westchester at 0.18%