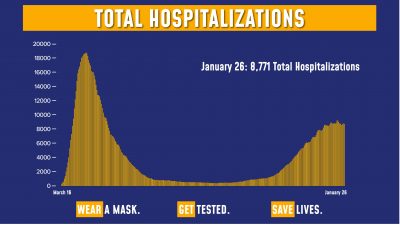 Coronavirus cases in Westchester County increased by 558 on Wednesday, bringing the total number of positive cases to 91,223 since the start of the pandemic.

The county’s daily positivity rate is 6.60 percent, with 8,454 tests administered on Monday, according to the state tracker. Overall, more than 1.72 million COVID tests have been taken in Westchester since March.

The county reported six more deaths, bringing the COVID-19-related death toll to 1,864. This week 18 people have died from the virus in Westchester, with 189 fatalities since the start of the new year.

As of Monday, there are 550 virus patients in Westchester hospitals.

Putnam currently has 1,089 active cases, a decrease of 43 over the previous day.

Two new coronavirus-related deaths were reported on Wednesday, raising the overall death toll to 79 since the start of the pandemic. This week three people have died from the virus, with 12 overall fatalities since the start of 2021.

Statewide hospitalizations stand at 8,771, a decrease of 60 over the previous day. Across New York there have been 1,361,082 positive coronavirus cases since the start of the pandemic.

Leaders across the Hudson Valley have determined that high-risk high school athletics can officially resume next month.

Days after Gov. Andrew Cuomo granted local municipalities that ability to decide if high-risk sports should proceed after being halted by the state last fall, seven county executives from regions in Section 1 and Section 9 released a joint statement giving the go-ahead to allow practice to begin on Feb. 1 at the sole discretion of the governing school district or non-scholastic athletic organization.

Officials in their statement agreed that sports provide many positive impacts for a student’s social, physical, and emotional well-being and should be authorized whenever possible.

“Children in particular have suffered significant mental harms due to the isolation of not being in school consistently, not socializing with friends and family, and not partaking in extracurricular actives,” Westchester County Executive George Latimer said. “I am in favor of providing our children with some normalcy so that they can begin to heal from this horrific pandemic.”

Per the agreement, county health departments in the region must monitor whether there has been a more transmissible variant of COVID-19 identified in the area, as well as the percent of infection rate of residents and the ability to monitor compliance.

Additionally, school districts and organizations running sporting events must provide oversight and compliance in accordance with all state and local guidelines. Parents, coaches, and athletes will also need to sign a consent form to participate in activities indicating they understand the risk of disease transmission.

Furthermore, surveillance testing programs may be considered, but are not required to minimize the spread of coronavirus within the activities.

“It is up to each school district to decide whether to allow their students to participate in high-risk sports,” Putnam County Executive MaryEllen Odell said. “The health and safety of students, staff and local community during this pandemic must be each district’s first priority. What works in one district does not necessarily work in another.”

With COVID-19 infection rates lowering following a surge prompted by the various holidays toward the end of the year, Gov. Andrew Cuomo announced that all colored zones have been lifted in Westchester County.

Those areas include portions of Ossining, Peekskill, Tarrytown, Yonkers, and New Rochelle, which have been labeled a yellow zone since November. All of Port Chester was designated an orange warning zone in early fall.

“You see a drop in both the orange and the yellow zones,” Cuomo said on Wednesday. “Given the progress they made, the restrictions are lifted in those zones.”

When coronavirus cases and hospitalizations were starting to see a significant rise last fall, Cuomo instituted a three-tier, color-coded system aimed at targeting micro-clusters. Areas throughout the state, if warranted, either received a yellow, orange, or red designation, with each carrying certain restrictions on gatherings, activities, businesses operations, schools, and testing.

To be classified as a yellow zone, the lowest of the three-tier system, an area would need a 7-day rolling average positivity rate above 2.5% for 10 days and the addition of 10 or more new daily cases per 100,000 residents on a 7-day average.

Moving forwarding, communities in COVID hot spots are only subject to statewide regulations and local mandates.

Cuomo also announced additional cases of the United Kingdom variant of COVID have been found in Westchester County, although he didn’t specific the amount. The county currently has three confirmed cases of the more contagious strain of the virus.

“We don’t know exactly what is going on with these new strains,” Cuomo said. “And the concept of not knowing is very troubling.”

Due to the aggressive spread of the virus, the United Kingdom has been under lockdown since mid-December. The Centers for Disease Control and Prevention now requires all passengers flying from the United Kingdom to the United States to test negative for COVID-19 prior to boarding.

Health officials warn that the new variant is up to 70 percent more transmissible than earlier versions of the virus, but there is currently no evidence showing the new variant causes more severe illness or increased risk of death. It is also suggested the U.K. variant will likely become the dominant strain circulating domestically by March.

However, like the coronavirus, the CDC asserts that an increase in cases will put more strain on health care resources, lead to more hospitalizations and potentially more deaths. Officials are also wary of other strains deriving from South Africa and Brazil.

On Jan. 4, Cuomo announced the state’s first case of the U.K. variant had been confirmed in a 60-year-old man from Saratoga County. The individual had no known history of travel when he tested positive.