One of the thrills for new up-and-coming Westchester-based bands is a chance to play the Pleasantville Music Festival.

It’s no different this year for the three winners of the festival’s annual Battle of the Bands, a competition that starts in the winter with groups and performers up through 25 years old sending in tapes and concludes in the spring with the final round performances and announcement of the winners.

Anton Klettner, a founding member of the band Platinum Moon along with his brother Joseph, will be the first group on the Main Stage at about 12:30 p.m. on Saturday. The possibility of winning that coveted spot in the festival lineup is the reason they entered.

“I just think to have the opportunity to be able to spread our music to a very large population and to perform on the big stage with a lot of people, that’s what drove us to participating and we’re definitely very excited to be performing for a lot of people,” Klettner said.

The brothers, who were classically trained and grew up and live in South Salem, are Platinum Moon’s guitarist and keyboardist. They are accompanied by lead singer Ava Andruze of Mount Kisco and drummer Ethan Grosman of Putnam Valley. Grosman joined after being told that a band was looking for a drummer by his music instructor.

Anton Klettner described their music as classic rock with a modern twist.

He and Joseph, who had been playing since taking lessons as young children, learned of Andruze through a performance on a YouTube video. They sought to contact her when looking for a lead singer for the band. Andruze was a bit wary of the overture.

“Hearing from somebody you’ve never met before, that’s always a big question mark because you don’t know how dedicated somebody is, you don’t know how much effort they put into what they do,” Andruze said. “But I think the moment that I heard all of us play together these great rock songs – we didn’t start with originals – but the more I heard us play all together I knew just how talented everyone was in the group and I could see a really amazing future ahead for us.”

Noshows, launched by Max Satow of Chappaqua, and Pleasantville singer-songwriter Carter-Quinn Tanis, will kick off the festival at noon on the Party Stage and Chill Tent, respectively.

Noshows is led by singer and guitarist Max Satow, who grew up in Chappaqua. He met bass player Zach Munowitz in high school and have been playing together ever since. Satow met drummer Isaac Pincus at upstate Bard College. Pincus and Amadeo Corey, the keyboardist, are from Manhattan. Satow’s brother, Dylan, plays trumpet.

“A couple of years ago I never thought something like this would have been possible,” Satow said of playing a festival for the first time, one that has attracted as many as 5,000 people. “I guess to me it was that all the hard work has kind of paid off, all this time playing music and grinding it out and getting the band together and all that and all the practicing that we do and everything, to me it just means like all of that is worth it.”

They described their music as an eclectic blend of hip-hop, funk, jazz and alternative rock. Like all the Battle of the Bands winners, adapting to a large venue will be a new experience. They’ve performed at venues throughout the city, including The Nest in Brooklyn and Bowery Electric.

Pincus said each club they’ve played offers a very different set of conditions and they’ve been able to adapt.

“We focus on just playing in very different practice spaces and learning to move through the set so that we’re able to take on anything,” he said.

For Tanis, who grew up in Pleasantville, securing a spot in the festival is the thrill of a young career. The recent Berklee College of Music graduate had hoped to attend the festival when KT Tunstall played several years ago, but was unable to go that day.

“I’ve been like growing up seeing all these people coming to Pleasantville and now it’s like I’m the one who gets to do it,” Tanis said. “It’s fun.”

While Tanis studied musical theater in school and much of the work done at school is in that realm, this will be the first time they will be focusing on original material for a performance.

Tanis also likes to focus on writing songs with a story. One song, “Old School,” was written after a chance encounter in the summer of 2020 waiting for a COVID-19 test in Boston. Tanis struck up a conversation with a man who had been an announcer for some big-time rock shows in the 1960s and ‘70s.

Don’t be surprised if you see Tanis pull out the baritone ukulele.

“So it’s been really interesting these past few months performing as Carter-Quinn Tanis rather than just writing songs for other people and for other musicals and stuff,” Tanis said. “So this is going to be my first time, actually, performing with background vocalists and multiple instruments on one set. So there’s a lot of first for this festival.” 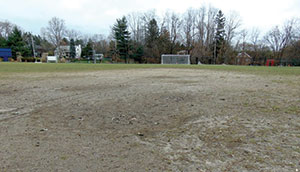 No. Castle Fires Labor Negotiator for Breach of Confidentiality