Everyone we asked prior to the start of the 2022 campaign suggested YORKTOWN was the team to beat in Class A this season, and Coach Zoran Milojevic’s undefeated Huskers (6-0) did nothing to dispel that notion last week after they zipped past Rye, 4-1, Nanuet, 2-1, and then blanked LAKELAND, 2-0, Saturday afternoon at The Murph.

“I loved that Lakeland came ready to play rather than staying back and defend,” Milojevic said. We had scouted them very well and were waiting for them to crack. It was a tremendously tough week where we played four very competitive matches. It all comes down to hours, days and months we used to prepare for this grueling season. Defense stood tall today, but we made the difference in the midfield by winning 50-50’s and having more possession. Very clean game and congrats to Lakeland for playing it fair.”

Against Nanuet, Yorktown’s combination of Nick Varela (2G) and Matt Pozo (2A) were in sync, the duo building a 2-0 halftime edge that goalies JP Frucco (2 saves in the first half) and Jason Douglas (1 save on two shots on goal in the second half) preserved, but the Huskers allowed their first two goals against all season.

“Rye scored on us first,” Milojevic said. “We were playing on a very uneven grass field. I was rotating a lot of players and we were a bit exposed in the second half. Nanuet used it to score on us.”

LAKELAND’s 1-0 win over Eastchester was a proving-ground win, showing the Hornets are capable of beating some top-tier teams. Hornet senior Derek Jaramillo scored off a feed from junior M Connor Daly and G Anthony DiRusso needed just four saves to earn the shutout.

“It’s a massive win for us,” Hornet Coach Tim Hourahan exclaimed! “We had a great atmosphere at Lakeland as well. We loved it!

GREELEY’s Marlon Perez started senior night off with a boom, taking an assist from Justin Xiang, who popped a pair of tallies in the second half to help knock off FOX LANE, 3-0. Bryce Bernbach had one assist. G Diego Velasco (5 saves) had the clean sheet, including a penalty shot. The Foxes fell to 2-5.

SOMERS lost to Tappan Zee and G Anthony Tucci (12 saves) was busy for the Tuskers.

Brewster’s Dante Gulla had a PK and Drew Velardo hit another.

Mendieta also scored twice in the first 10 minutes and completed the hat trick before halftime in a 6-2 win over Pawling. Lopez had three assists.

CLASS AA
WHITE PLAINS improved to 4-3 with a 7-0 win over Scarsdale B on goals from Isaiah Mercado Torres ,Chris Madrigal (assisted by Rhaymani Alexander 3:02 left in 1st). In the second half the Tigers blew it open behind tallies from Charles Reid (assisted by Xavier Bellande), two from Lucas Antenucci (assisted by Juan Rendonand Ryan Appel), Juan Rendon (assisted by Gael Baraldi) and Alexander.

State-ranked (No.20) BYRAM HILLS took a 2-0 decision over John Jay-Cross River when Aidan Heffner set up both Zach Pero and Max Colella. Will Harrison and Gavin Nichols combined on the clean sheet with eight saves.

State-ranked (No.11) BRIARCLIFF knocked off Blind Brook, 4-2, when Miles Prosperino tied the game at 2-all and Bear hotshot Nathaniel Rohde scored both the go-ahead and insurance goals. Emilio Abud-Chalita aalso scored for the Bears (5-0-1). Jason Rosenbaum and Connor Dornau each set up a score. The Bears also blanked PLEASANTVILLE, 2-0, as the Panthers fell to 4-2 and had their four-game win streak snapped.

State-ranked (No.6) Class C HALDANE trimmed PUTNAM VALLEY, 3-1, on the strength of two tallies from Clem Grossman (1A). The Blue Devils (5-1) got another from Ryan Eng Wong while Josh Leal scored for the Tigers (1-6).

Viking G Leo Dragone made seven saves for VALHALLA in a scoreless tie with Blind Brook. Weary Valhalla (2-3-2) played a man-down most of the second half and played 200 minutes total on consecutive nights. 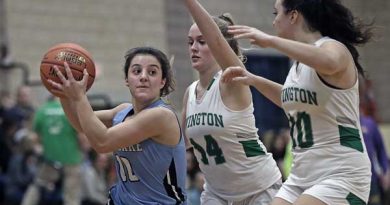 Westlake’s Playoff Run Ends With a Loss to the Bulldogs