Perhaps nobody will have it tougher than YORKTOWN, though. The current seeds show the Huskers (16-0) having to face reigning NYS champion and eighth-seeded SOMERS in the quarterfinals and No.4 crosstown rival LAKELAND in the quarters before a potential title with No.2 Tappan Zee, ranked No.6 in NYS. So, Yorktown, while having become the first team in school history to go undefeated and untied in the regular season, has one heck of a road to hoe en route to the finals.

“As for class A and B, the one seeds are of course the favorites and are both undefeated, but both classes are so deep,” Lakeland Coach Tim Hourahan said. “The waters are so much tougher to navigate, so whoever wins Class A and B will have won four really tough games.”

Which should set them up rather nicely for the state tournament where Yorktown would host the Section 9/Section 4 winner on Nov. 5 should they survive and advance.

But let’s not put the cart before the horse because the road to the sectional finals has some serious bumps to navigate.

Yorktown managed to score 15 goals in a pair of season-ending wins over BREWSTER and John Jay CR, piling up the 11th and 12th shutouts of the year for this splendid back line of defenders, which have allowed just four goals all season in front of skillful keeper JP Frucco.

Fifth-seeded HORACE GREELEY (11-2-2) went off on Saunders in an 8-0 win behind goals from Jesse LaRosa (2G), Jeremy Taber (2G), Bryan Ji, Bryce Bernbach, Daniel Fioretti, Diego Weiss and Gordon Walsh, thus securing home field advantage in the first round and setting up a potential doozy with Lakeland in the quarters, though Lakeland would have to survive the No.13 MAHOPAC/No.20 HEN HUD outbracket winner. The Indians are 7-8 on the season and have lost four of the last five but those losses have come against some tough Class AA competition, including CARMEL, Arlington, John Jay EF and Somers. In other words, don’t expect an easy out when a hardened Mahopac pays a visit. However, the collision course between Coach Hourahan’s Hornets and Coach Camp Shropshire’s Quakers seems inevitable. The Quakers also defeated WESTLAKE, 3-1, as the reigning Section 1 Class B champion Wildcats fell to 5-9-2. After Thomas Lyden spotted Westlake a 1-0 lead, Diego Weiss, Jesse LaRosa and Gordon Walsh netted consecutive goals for the Quakers, who have not lost in their last seven matches (6-0-1).

At 10-6 overall, SOMERS is the team nobody wants to see in the early rounds, but in the same breath it would be a feather in anyone’s cap to knock the Tuskers (10-6) off their perch while developing confidence throughout the tournament, which is what ninth-seeded Sleepy Hollow might be thinking. Though, it would be a shocker if Coach Brian Lanzetta’s Tuskers aren’t squared off with Lakeland in what would be an entertaining quarterfinal round, with winners potentially taking on Yorktown.

HEN HUD put a monkey wrench on PEEKSKILL’s plans with a 1-0 Sailor win behind a goal from Zach Zalamea, assisted by Charley Corrad 15 minutes into the second half. The loss sent the Red Devils (10-4-2) to the No.6 seed and kept the Sailors (3-12-1) postseason hopes barely alive.

Unofficially, No.15 PANAS (6-8-2) has a ridiculously tough draw with No.18 Roosevelt in the outbracket before going to Tappan Zee in the opening round. Panas finished off PUTNAM VALLEY, 3-0, when the Tigers failed to contain Jefferson Velasquez who posted a natural hat trick for the Panthers (6-8-2). Velasquez also scored twice in a 2-2 with Peekskill. Daniel Farez and Randy Tapia spotted Peekskill a 2-0 lead before Velasquez saved the day.

Panas did not fare as well in a 2-0 loss to LAKELAND, which won the league title behind tallies from Connor Daly and Mike Rodriguez to avenge an earlier loss to Panthers. Bryan Jaramillo finished with one assist and Oban Rader made four saves for the shutout as Lakeland (12-3-1) closed with seven wins in its last eight and went 7-1 against league foes. Coach Hourahan’s Hornets are playing their best soccer of the year heading into the postseason.

The Vikings (5-8-3) came out strong against the Bears, and Lucas Signes scored off a Vincent Reyes assist. This broke Briarcliff’s back line for the first time in three games, but the response from the Bears was immediate. Molinoff and Klar each scored within a minute of each other, making the halftime score 2-1. Abud-Chalita and Rohde scored late second half goals to put the game away.

BYRAM HILLS suffered a 3-1 loss to a really good Bronxville club Sunday when the Bobcats (9-5-2) let an early Aidan Heffner goal go to waste and fell to the No.6 seed in Class B. Still, nobody will discount the Bobcats, who have as much tradition on their side as any club in Class B. The unit has faced a tough schedule under Coach Matty Allen and are quite prepared for the rigors of the postseason.

PLEASANTVILLE fell to 8-6 after three-straight losses to Rye Neck (2X) and Blind Brook.

HALDANE, ranked No.6 in NYS Class C, won the league championship last week with wins over North Salem (4-1) and Croton (7-2). The Blue Devils (13-2) went 8-0 in league play but did suffer a 2-1 overtime loss to Peekskill. Red Devils Joe Uzhca (PK at ‘9 in 1st half) and Jonathan Mendieta (finished inside the 6 yard box from a Chris Chalco pass at the ‘3 of the 1st OT)

Haldane’s Matt Silhavy headed home a corner kick by Brandt Robbins at the ‘30 of the second half to force OT.

Robbins was at it again in the win over North Salem, tickling twine twice. Clem Grossman added a goal and an assist. Blue Devil sniper Ryan Eng Wong put a hurt on Croton, bagging a hat trick and setting up three more goals.

CLASS AA
The potential playoff rematch between No.6 WHITE PLAINS and No.11 CARMEL in the opening round is quite intriguing, considering the Tigers barely got off the bus in a 4-1 loss to the host Rams (6-7-3) in early September. Back then, the Tigers had no answer for Kyle Klammer and Co., but a different Tiger team (11-4-1) has emerged since then; one that has gone 7-1-1 in its last nine, one that has allowed two goals in its last seven games.

White Plains continued its strong play in a 2-0 win over Port Chester behind goals from Chris Salazar (assisted by Rhaymani Alexander) and Charles Reid (assisted by Abraham DeOliveira) and a shutout effort from G Milo Kris (6 saves).

The Rams (6-7-3) fought to the finish in a 2-2 tie with RCK when Neel Walia (assist to Alex Kozlowicz) and Klammer (assist to David Maldonado) scored come-from-behind goals.

OSSINING (10-3-3) will enter the fray as the No.4 seed having gone unbeaten (4-0-2) in its last six. Goals have been tough to come by (just four in the last four games) but the Pride defense has been stout, just four goals in its last seven games. Ossining will draw No.13 Mamaroneck in the opening round before a potential quarterfinal match with No.5 John Jay EF.

Scarsdale looks like the team to beat but the road to Class AA supremacy has often run through Dutchess County where the Raiders will have to contend with No.2 Arlington (in the finals?) – who they beat 1-0 – and John Jay EF (in the semis?) – who they edged 2-1 – or Ossining. Saddle up! 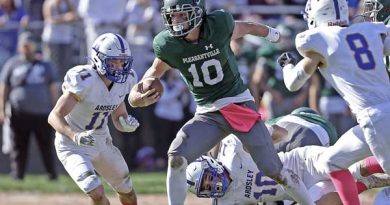 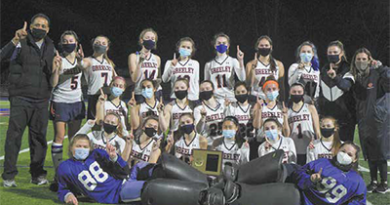 No.1 Greeley Holds off No.2 Carmel for Large School Regional