Skip to content
The Northern Westchester Examiner
May 14, 2019 Rick Pezzullo
We are part of The Trust Project

Since the new Lowe’s home improvement store opened its doors in Yorktown in early April, traffic congestion on Route 202 near the Taconic State Parkway entrance and exit ramps has been an issue.

However, Yorktown Supervisor Ilan Gilbert announced last week several road repairs and improvements are planned during the next few weeks that are expected to help vehicles travel more smoothly and quickly through the area.

“We have all suffered through it,” Gilbert said of the extensive delays that have occurred by the choppy state-controlled roadway and timing of the traffic signals that have only allowed a handful of vehicles to proceed before turning red again.

Gilbert said he has had several meetings in recent weeks with state Department of Transportation representatives and consultants, along with contractors and officials from Breslin Realty, which built the 124,000-square-foot Lowe’s, and also has plans to construct three other retail buildings on the 25-acre property: one 9,000 square feet, one 6,300 square feet and one 2,100 square feet with a drive-thru feature.

Out of those meetings, Gilbert said a game plan has been established, starting this week, where certain sections of the roadway will be ripped out to allow repairs in certain spots. Next week, for three nights, one of the developer’s contractors will mill and repave the road from Strang Blvd to Old Crompond Road—weather permitting.

“I believe a number of our residents are not aware that Route 202 is a state road and the town does not have control over that road,” Gilbert explained.

After the road is paved, Gilbert said another contractor will install a loop in the road’s pavement. This loop is designed to detect traffic and adjust the pre-programmed timing of the lights to accommodate the actual flow of traffic. That is expected to take approximately 12 days.

He noted one of the main concerns of the Department of Transportation is that traffic not backup on the Taconic State Parkway when cars are attempting to exit the parkway. He added the state does not allow its roadways, including Route 202, to be repaved until the asphalt plants are opened and the temperature reaches a constant 40 degrees. 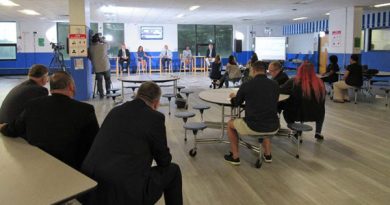