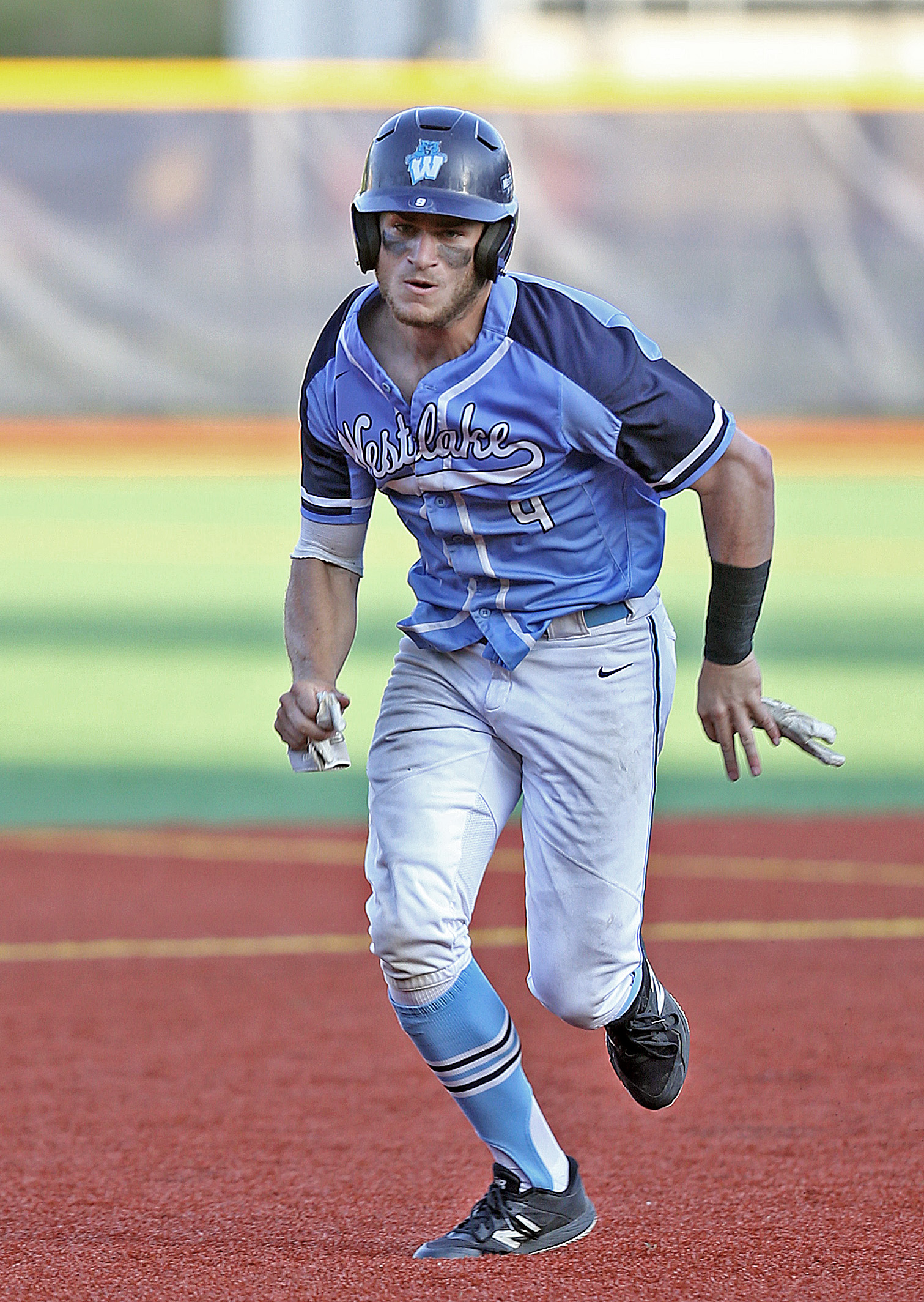 The Wildcats’ Tom Carpenter runs toward third base during the Class B state playoff at Pace.

The opening round of the state Class B playoffs brought the Westlake baseball team nothing but frustration.

Brendan Mahusky hurled a one-hit shutout and designated hitter Will Logue belted a three-run double in the fourth inning to break open a close game as Section 9 champion Marlboro defeated the Wildcats 5-0 in a regional semifinal game on Thursday night at Pace University.

“They’re a very good team,” said Westlake coach John Consorti about the victorious Iron Dukes. “Credit to them, they played a great game. Their pitcher pitched a great game and we made a few too many mistakes.”

Just five days after capturing the school’s first sectional championship in 19 years, the Wildcats returned to the same venue looking to take a big step toward a state title. But Mahusky, a senior right-hander, kept them off balance until Richie Petrillo bounced a single into right field leading off the bottom of the sixth inning to break up his bid for a no-hitter.

“I don’t know if it was a cutter or what not,” said Consorti, trying to describe the pitch that Mahusky relied on to tame the Wildcats. “But it seemed to be running away from our right-handed hitters and we were struggling with it a little bit. And every time we hit the ball hard, we hit it at somebody. It’s baseball. You have days like that.” 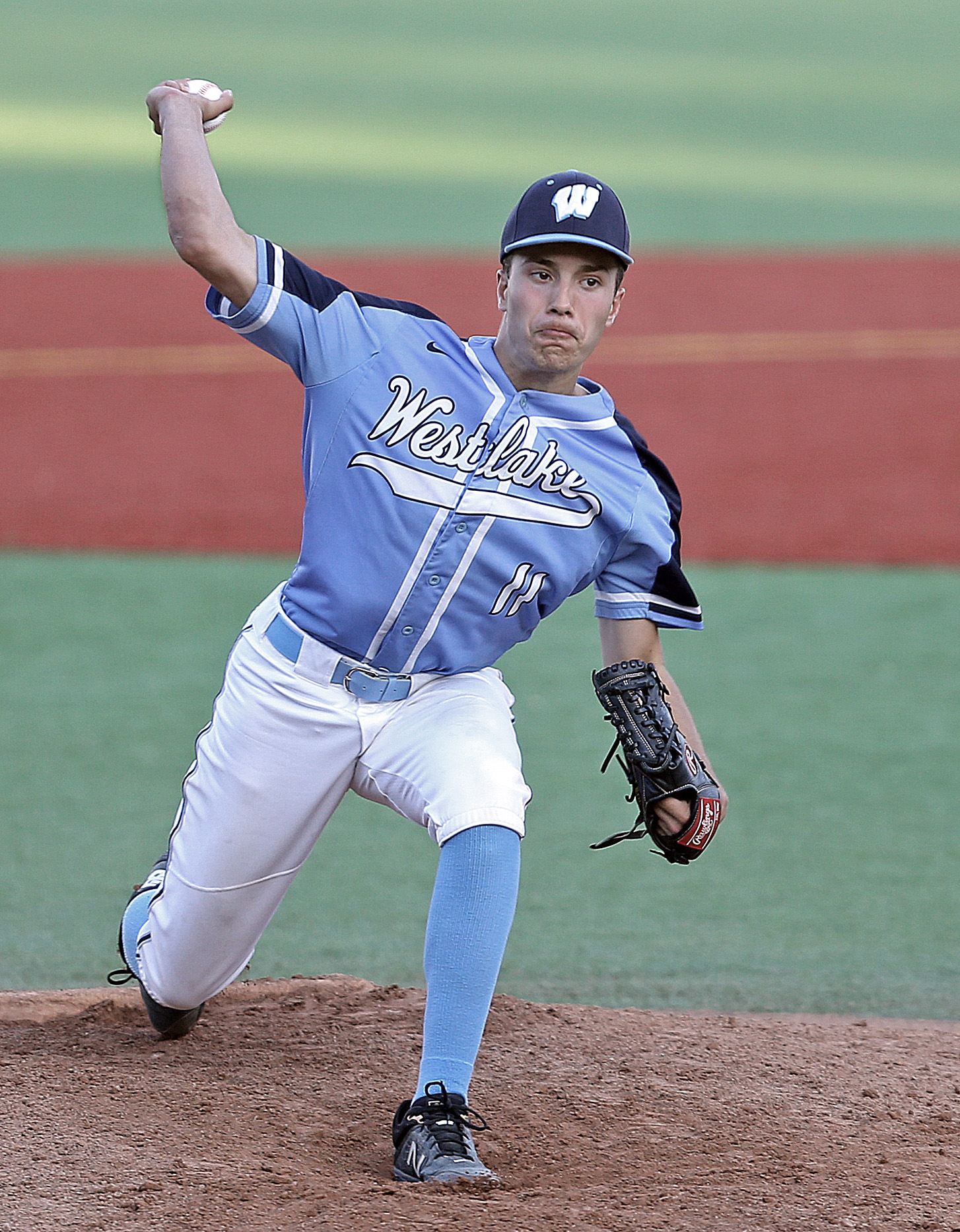 Marlboro, unscored on now through four playoff games, left a runner stranded at second base in each of the first two innings. But the Iron Dukes broke through against Petrillo, the Wildcats’ starter, in the top of the third and scored the only run Mahusky would need. Logue led off with a single up the middle, then stole second and third base. A long fly ball to center by Eric Grzechowski with one out easily brought Logue home with the game’s first run.

In the bottom of the inning, Mahusky retired the Wildcats in order for the second straight time, though leadoff hitter Joe Pennini hit the ball deep to left field and Mike Zulli then lined out to right. By the time Westlake would bat again, the Iron Dukes had broken the game open.

The top of the fourth inning began with Christian Diorio ripping Petrillo’s first pitch into left for a single. Mike Paolo’s bunt attempt turned into an infield hit. One out later, Alec Ledue lined a single to left to load the bases. Consorti then turned to Steve Donato in relief of Petrillo, just as he had in the sectional final against Briarcliff.

But Logue belted a full-count pitch into the gap in right-center field, scoring all three Marlboro base runners. Donato soon retired Mike Greco on a fly to right and Sam Mongelli on a liner to third, but the damage was already done and the Wildcats were suddenly facing a 4-0 deficit.

“I guess today it didn’t work out, but that’s our move,” said Consorti about the switch from Petrillo to Donato. “It’s what we do. I would do it again. We were looking for a little change there, maybe a strikeout or two. But it didn’t work out this time. Honestly, we thought we had him struck out before he got the big hit there. We didn’t really manufacture anything offensively, so obviously it makes that hit real big.”

With the top of the order batting, the bottom of the fourth inning got off to a promising start for the Wildcats as Tom Carpenter and Vin Spaziante both reached on walks. But Mahusky induced Tom Iazzetta to bounce into a rally-killing double play and then struck out Mike Mancuso to end the inning.

Petrillo returned to the mound in the fifth and retired the Iron Dukes in order. In the Wildcats’ half of the inning, Pennini reached when he was hit by a pitch with two outs. But Zulli was retired on a ground ball to second and Westlake went to the sixth still seeking its first hit of the evening.

Marlboro added an insurance run in the top of the sixth after pinch hitter Austin Laird reached on an infield hit and Leduc drew a base on balls. A fly to center moved Laird to third and he soon scored on a double steal after Leduc got caught in a rundown between first and second long enough to make the throw home by second baseman James Stuetz too late.

“Yeah, it’s something we work on, the double steal,” said Consorti. “We weren’t sharp with it. We should’ve done a better job with that. Today we weren’t as sharp as we usually are.”

With their season all but over, the Wildcats managed to avoid the indignity of getting no-hit when Petrillo singled to start the bottom of the sixth inning. But Mahusky wasn’t the least bit fazed and proceeded to retire Carpenter on a grounder to third, Spaziante on a fly ball to center and Iazzetta on a fly to right.

In the seventh, Marlboro’s Mongelli led off with a blast that eluded Zulli in left field. But he was stranded at third base as Petrillo retired the next three batters. The Wildcats came to bat for the last time in the bottom of the inning still trailing by five runs. Mahusky surrendered a one-out walk to Donato, but Sal Nardone was retired on a fly to left and the game ended with a diving catch of Pennini’s pop fly down the line in right.

“When you get one hit in a game, the odds are you’re not gonna win the game,” said Consorti. “Today just wasn’t our day, but it can’t dampen what they’ve done in their career and what they’ve done this year. I’m disappointed for them tonight, but they had a great season. They won a section title and no one can ever take that away from them.”

A 16-win season highlighted by last week’s 12-inning, 5-4 victory over Briarcliff for the Wildcats’ first sectional championship since 2000 won’t soon be forgotten at Westlake.

“I’ve been with most of ‘em three years,” said Consorti, whose Wildcat roster was dominated by a dozen seniors. “To come into a new situation, to have this group of talent makes your job a lot easier. They bought in and each year we got better and better. So obviously I’ll miss ‘em a lot. I didn’t know if I’d ever coach again. I was given the opportunity and I was blessed to coach a group like this.”