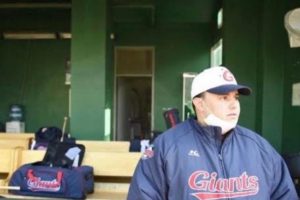 Herzenberg is serving in his first season with the Giants of the Korean Baseball Organization, working as a pitching coordinator/quality control coach. Photo by Sung Min Kim.

With Major League Baseball currently benched due to COVID-19, the Korea Baseball Organization (KBO) is the only game in town shown in the United States for those yearning for the games of summer that are not replays on television.

The most popular of the 10 teams in the KBO are the Lotte Giants, and one of its coaches is Josh Herzenberg, a native of White Plains.

Herzenberg, 30, a former left-handed hurler at White Plains High School and SUNY Oneonta, is serving in his first season with the Giants as pitching coordinator/quality control coach.

“It was a professional opportunity that was very exciting,” Herzenberg said Friday from the southeastern city of Busan in South Korea. “I feel like I’m in a pretty good situation now. I have a lot of responsibilities to make a positive impact on the organization.”

After receiving a Master’s degree in economics from Georgetown University in 2013, Herzenberg worked in the scouting department for the Arizona Diamondbacks and Los Angeles Dodgers in the minor league system. He also worked as a coach for the Dodgers during his three years with the organization. 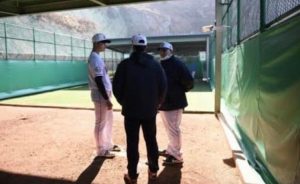 Sung Min Kim, a staff member with the Lotte Giants, captured this image of Coach Herzenberg at work.

“I fell in love with the player development part of the game,” he said.

Herzenberg took a break from baseball for a few years before his passion returned after he took part in a sabermetrics seminar at Boston University last August. Through networking and an interest in attending a two-week coaching clinic in Korea, he was offered the role with the Giants, which he contemplated for three weeks before accepting.

“Moving to Korea and experiencing a new culture was an opportunity I would probably never get a chance to do,” he said.

His journey got off to a rocky start as the day (February 15) he landed in Korea the coronavirus hit, delaying the start of the 144-game season. With the number of cases in the region not severe, the KBO was able to hold Opening Day on May 5, with no fans in attendance.

“It’s weird not playing with fans,” said Herzenberg, who noted umpires and coaches wear masks during the games. “It’s definitely something they (players) have to get used to because they like to feed off the fans. Baseball is the only major sport in the city. Fans are pretty passionate about the sport and the team.”

Herzenberg’s primary job is to serve as a liaison between the team’s research and development department and its players and coaches. Being not fluent in the language, Herzenberg is often accompanied by an interpreter.

“I’m trying to learn. It’s a challenge because it’s almost like playing telephone,” he explained. “I try to be very concise with my message. It’s a very different culture. The food is awesome. I came to Korea. Korea didn’t come to me. Overall, it’s been great.”

ESPN is televising games from the KBO once a day. The games can also be streamed internationally.

“Ratings have been through the roof,” Herzenberg said. “It’s good to stay connected.”