The public session at the White Plains Public Library last Tuesday focused on developing a community vision statement and a priority list of projects in the 256-acre study area in the center of the municipality’s business district, a component that is required by the state’s Economic Development Council.

Planning Commissioner Christopher Gomez said the public input from the Heart of the White Plains Strategic Investment Plan meeting will be included in the city’s grant application, which must be submitted to the state no later than this Friday. The Economic Development Council will be selecting one municipality’s application in each of New York’s 10 regions, each worth $10 million.

Additional outreach was received at the farmers market on Sept. 7 in addition to last Tuesday’s meeting.

Gomez said he’s optimistic that White Plains will have an attractive and competitive application in the Mid-Hudson Region.

“The city has applied previously,” he said. “We’ve been unsuccessful (in the past) but we’re hoping that in light of all the planning we’ve been doing and the comprehensive planning and outreach, we’re hoping to be successful this time around. It’s a great opportunity.”

Neighborhood connectivity could include consideration of a neighborhood trolley, formalization of the Ferris Avenue Greenway, linking the Battle Hill section of White Plains, expanding bike lanes and parking and improving circulation at the Metro-North station.

Public art would be a major piece of the community identity strategy along with developing a multi-generational community center. Marketing and branding of the city as well as wayfinding signage are also key components.

Open streets, broadband in municipal parks and public spaces, increasing the tree canopy and launching a small business innovation hub are among the targeted items in the enhancement of public space category.

“It’s about more and more of what people want it to be,” Mezey explained of what was sought from the public. “So we have all this development going on, all this seems to be downtown, what do they want to see. What’s going to keep them here when they change jobs, if they have children, at each stage of their life? So what brings people downtown and what helps people stay in the downtown?

The multigenerational community center, for example, is one of the features that the city is considering, she said. It’s also critical because White Plains actually experiences the reverse of empty-nester flight, with residents from other communities looking to downsize from their larger homes to a downtown that isn’t far from family and friends.

Several of last week’s attendees each had their hopes of what they would like the city emphasize in the process. Nicholas Wolff, a lifelong White Plains resident, said the city is quite vibrant with more than 90 restaurants downtown, but he would like to see it become more dynamic.

“With the 7,000 new apartments that are going to be built, we have to provide something to keep the people here and stay vibrant,” Wolff said.

“Nobody’s going to stay here if there’s nothing to do,” she said.

Another resident, who asked not to be identified, listed housing affordability as a critical challenge facing White Plains. Encouragement of more public art should also be a priority.

“I definitely want to see more of a progressive bent to development,” the resident said.

Announcement of the state grant is expected late this year, likely in December, Gomez said. If the city is awarded the money, additional public engagement will resume in January. If not, much of the information gathered from last week’s session can be used in the Comprehensive Plan update.

“I think we’re doing great in White Plains, so it’s something of a challenge for us to win the award, but we have opportunities to really get in and have some specific projects continuing and facilitating what the city’s been planning,” Gomez said. “We’re bullish.” 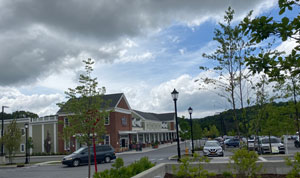