A dream season for the Westlake girls’ basketball team ended with a nightmare.

Just one win away from reaching the Section 1, Class B championship game, the Wildcats arrived at Irvington High School last Thursday afternoon and quickly discovered that their path to the final was about to vanish.

The host Bulldogs limited Westlake to just four baskets in the first half and went on to a 55-24 rout in a semifinal game that was all but over once they scored the first 10 points of the third quarter. Katie LeBuhn and Anders Knapp scored 16 points apiece as second-seeded Irvington cruised past sixth-seeded Westlake into Saturday’s championship game against the Tigers of Putnam Valley.

“Obviously we were excited getting this far,” said Wildcats head coach Sean Mayer, whose team finished 17-6 this season. “But that wasn’t our goal just to get here. We wanted to win. The girls are a competitive group and they wanted to win. It just wasn’t their day.”

That started becoming apparent mere seconds after the opening jump when leading scorer Allie Castellone couldn’t finish on a layup try, and the Wildcats then had to wait over five minutes for their first basket of the game, a short pop from left of the lane by Sami Oswald. By then Irvington had jumped out to an 8-1 lead.

“I thought we had a couple of early layups that if they went in would’ve really settled our nerves,” said Mayer. “But when you’re in a big game like this, it’s really important to try to make some shots early. And we just didn’t.”

A high-arching 19-foot jumper from the left corner with 18 seconds remaining by Julie Lyden, who led Westlake with 11 points in her varsity farewell, brought the Wildcats within 12-5 at the end of the first quarter. Six seconds into the second, sophomore Catherine Nebel, just inserted into the game, connected on a shot from the right elbow, cutting the Bulldogs’ lead to just five points.

But Nebel’s basket was followed by three straight baskets from the Bulldogs, whose rebounding domination on the offensive glass led to two of them. Irvington wound up finishing the first half with an 11-2 run, scoring the last five points after a Lyden bucket in the lane with 3:47 to go in the second quarter.

“Rebounding hurt us,” said Mayer. “We gave them a lot of second chances, third chances, fourth chances. Irvington has some really good shooters and you can’t give them that many looks. And then the other thing they did really well is when we missed shots, they really fast-breaked a lot. So when you’re not making shots and then you’re giving up layups, that’s not a good recipe for winning.”

The third quarter began with Irvington building on its big run that ended the first half, extending it to 21-2 by scoring the first 10 points. Lyden eventually put an end to it when she converted a conventional 3-point play, scoring on a short turnaround jumper from the right baseline while getting fouled with 4:31 remaining in the period.

Just 15 seconds later, junior point guard ToniAnn Mastracchio coasted in for a layup after making a steal. A free throw by Castellone was followed by another basket from Mastracchio, who dribbled through the top of the Bulldogs’ zone and scored on a scoop shot in the lane. The Wildcats were on an 8-0 burst and had sliced the Irvington lead to 33-17 with just over three minutes to go in the quarter.

But consecutive fast-break layups 15 seconds apart by the Bulldogs’ Knapp soon stretched the Irvington cushion up to 22 points before Castellone connected on a step-back 3-pointer from the right corner for her only basket of the day. An easy layup by LeBuhn with nine seconds left in the third quarter gave the Bulldogs a 42-20 lead, but Lyden then answered with a 3-pointer from the top of the key just before the buzzer.

Unfortunately for the Wildcats, they would never get any closer in the fourth quarter. Irvington scored the first 11 points of the period and limited Westlake to a single point over the final eight minutes, a free throw by Francesca DeMartino with just 1:38 left on the clock. Just before DeMartino stepped to the line, Lyden was summoned to the bench by her coach so she could hear cheers from the Wildcat fans one final time.

“Julie, she’s been in the program five years and, you know, she means a lot to us,” said Mayer. “She played well tonight, but it’s a great experience for the other girls. We obviously have a core group coming back and it’s nice to be in this environment. I wish we would’ve played a little better, but those things happen.”

The Wildcats had clinched their league championship by defeating Briarcliff three weeks earlier and they earned a pair of playoff victories before facing the Bulldogs riding a six-game winning streak.

“Like I told the girls,” said Mayer, “we’re not gonna let this game define the season that we had. It was a great season and I’m very proud of them.” 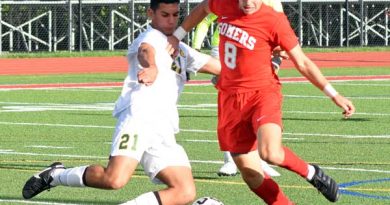 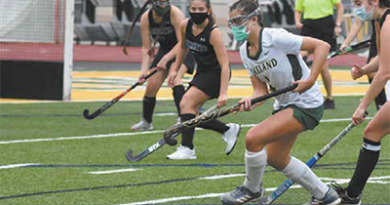 Lakeland’s Section 1 Unbeaten Streak of 210 on Line vs. Greeley