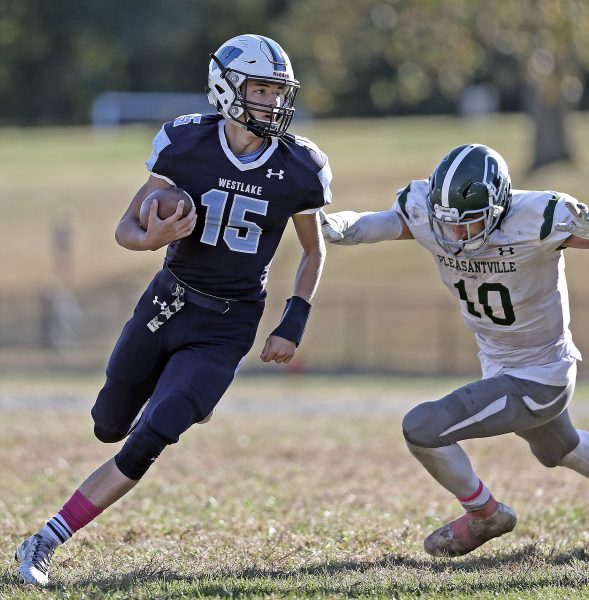 Westlake quarterback Jason Ausiello runs for a touchdown in the win over Pleasantville.

Who could’ve guessed late Saturday afternoon when the Westlake football team opened up a 20-point advantage over visiting Pleasantville 90 seconds into the fourth quarter that the final minutes of the contest would somehow turn into yet another dramatic finish between the two fierce rivals?

But the seemingly down-and-out Panthers roared back to life with a blocked punt, a successful onside kick and a pair of Michael LaCapria-to-Jared Wilens touchdown passes. Suddenly the Wildcats’ big lead was trimmed to just six points and there were still nearly five minutes remaining.

It took an interception by Westlake’s Andrew Llamas on the final play of the game to finally put an end to the Panthers’ late comeback bid and secure a 20-14 nail-biting victory for the Wildcats.

“This was a must-win for us, a must-win,” said a clearly relieved Westlake head coach, John Castellano, moments after his Wildcats had weathered the storm and improved to 3-2 this season. “It’s good to get this one under our belt.”

The Panthers, riding a three-game winning streak, turned the ball over four times in the first half. LaCapria, who threw five touchdown passes in last week’s win over Putnam Valley, had three of his passes picked off by the Wildcats, and the two teams left the field at halftime still scoreless.

“Yeah, he did struggle,” said Panther coach Tony Becerra about his sophomore quarterback’s early woes against Westlake. “Maybe we put a little more on him than we should’ve, given the performance he had last week. After last week’s performance, I had a ton of confidence in him. But any ineffectiveness on offense, it’s all me because as the offensive coordinator, anything that goes wrong on offense it’s always gonna be on me, never on a kid.”

It took Westlake just 30 seconds of the third quarter to do what neither team could do in the opening half — put some points on the scoreboard. Matt Sardo bolted 36 yards to the Panther 19-yard line on the first play from scrimmage, then quarterback Jason Ausiello raced to his right and reached the end zone. The PAT by Josh Gelman gave the Wildcats a 7-0 lead.

After the Panthers went three-and-out, Westlake took over near midfield and moved 49 yards in four plays, the last one a 37-yard jaunt by Sardo out of a wildcat formation. The kick by Gelman increased the Wildcats’ lead to 14-0 less than five minutes into the third quarter.

A poor punt by the Panthers on their next possession set Westlake up again at the P’ville 37-yard line. With a key fourth-and-six pass from Ausiello to James Murray, the Wildcats kept their drive alive and, three plays later, Nick Martinez ran four yards for another touchdown. Though they missed the point-after, the Wildcats still had a seemingly insurmountable 20-point cushion with 10:31 left in the game.

“We got in a little wildcat,” said Castellano about his team’s ability to move the ball on the ground after the scoreless first two quarters. “We made an adjustment at halftime. We saw something that they were doing and we kind of made an adjustment. It worked for us early. They adjusted to that adjustment, but at that point we had put three touchdowns on the board.”

After the touchdown from Martinez, Becerra gathered his players together for an impromptu pep talk.

“There was still a lot of time and we were feeling sorry for ourselves,” he said. “We asked them to battle. Keep battling. They did and we put a dent in it. It was just too little, too late.”

The Panthers responded by moving the ball 89 yards in eight plays, highlighted by LaCapria’s improvisational throw on third-and-six to Wilens for a 25-yard gain and capped by a 32-yard touchdown pass to Wilens. With the point-after kick from Nicky Doto, Pleasantville was within 20-7 with 6:14 remaining.

When they recovered the ensuing onside kick, the Panthers were right back in business with the ball at midfield. On third-and-nine, LaCapria connected with Wilens again, this time deep down the right sideline for a 35-yard touchdown. With two touchdowns in just 77 seconds, Pleasantville was suddenly within striking distance of an improbable come-from-behind win.

“Listen, that was a great throw,” said Castellano about the second TD pass by LaCapria. “Their quarterback had some issues early, but he played great in the second half for them.”

LaCapria and Wilens got an opportunity to bring the Panthers all the way back when a Westlake punt with just over three minutes remaining was blocked. P’ville took over at the Wildcats’ 41-yard line, but all the new-found momentum disappeared with an intentional grounding call on second down.

“The intentional grounding killed us, killed us,” said Becerra, who pleaded with the officials that he had a receiver, Sean Mueller, in the vicinity of the left sideline where the ball wound up. “It just squashed any momentum we had. I’ll have to check the tape. That really killed us. We were doing some things and it’s unfortunate that had to stop us.”

The Wildcats did have to punt the ball one more time, but it wasn’t blocked, leaving Pleasantville pinned back at its own 27-yard line with only 26 seconds on the clock. The interception by Llamas finally ended any doubt about the outcome.

“It’s just a great, great rivalry,” said Castellano. “It’s never easy, especially against Pleasantville. You know they’re gonna fight to the end. So I was kind of happy we responded the way we did.”