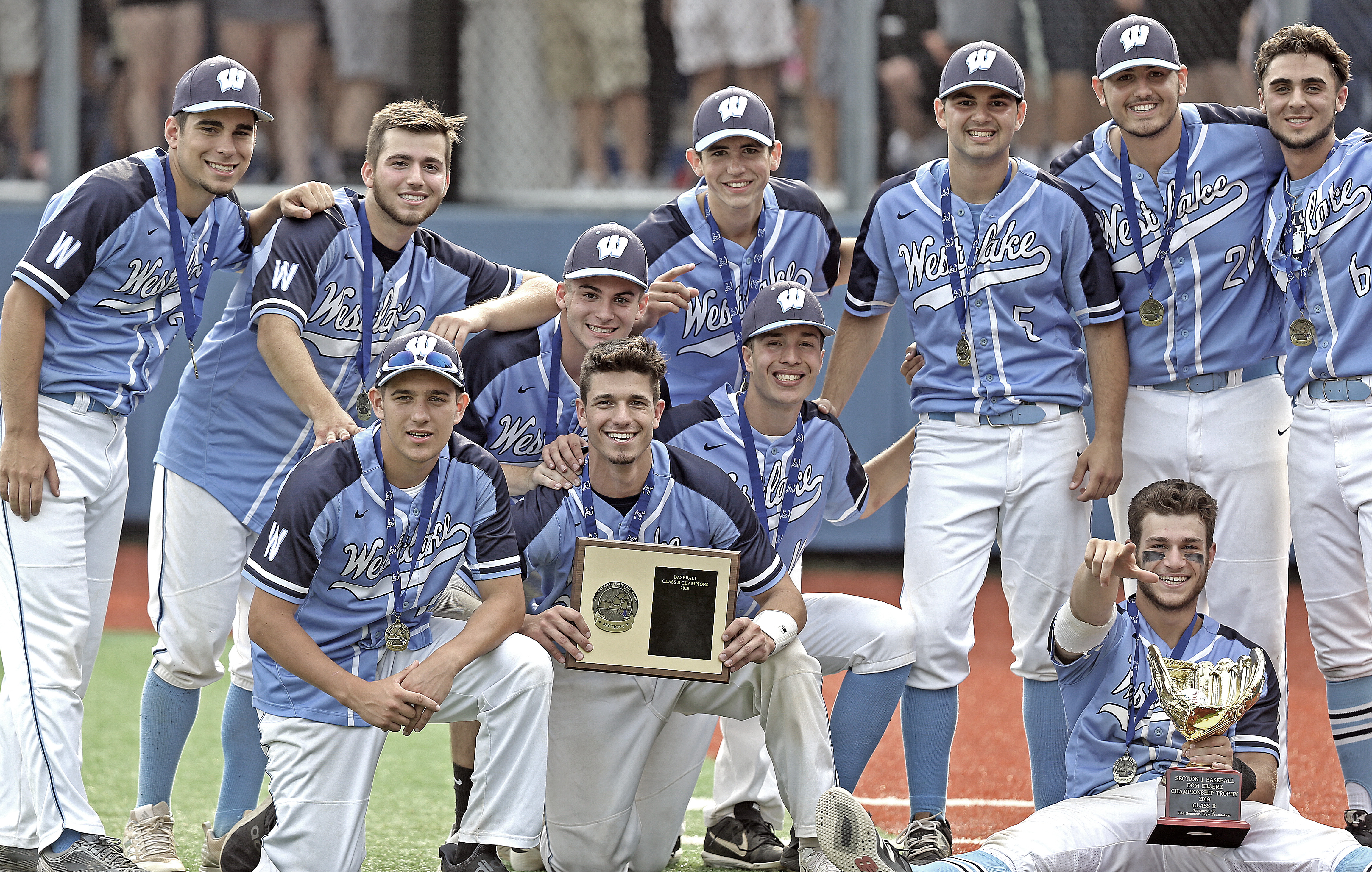 For the Westlake baseball team, the wait is over.

Nearly two decades after their last sectional title, the Wildcats finally put an end to their long drought on Saturday afternoon.

A sacrifice fly to center field by Joe Pennini in the bottom of the 12th inning brought home Steve Donato with the winning run as the Wildcats defeated Briarcliff 5-4 to capture the Section One, Class B championship at Finnerty Field on the campus of Pace University.

“I really have no words. It’s a surreal feeling,” said Westlake senior Tom Iazzetta, who earned most valuable player honors after his pitching and defense helped carry the fifth-seeded Wildcats past the Bears. “I mean, we’ve waited so long. We put in so much effort and to finally get it, I can’t put it into words.”

The two teams had begun the day with Westlake clearly in the driver’s seat since the Bears had already lost once in the double-elimination format introduced this year. Still the Wildcats had to overcome an early two-run deficit and a five-hit day at the plate by Briarcliff star Mike Hardy. They also cut down two potential runs for the Bears on close plays at the plate.

“It’s a great accomplishment just to get to this point,” said Wildcats coach John Consorti. “But to win it, and in the fashion we won it in, it’s special. We have a very talented team. They made plays when it counts. That’s the key.”

“I wouldn’t have expected anything less from Briarcliff-Westlake,” said disappointed Bears coach John Schrader. “It was a great, great game fought by both teams. Hats off to Westlake. We wish them nothing but the best of luck against (Section 9 champ) Marlboro on Thursday.” 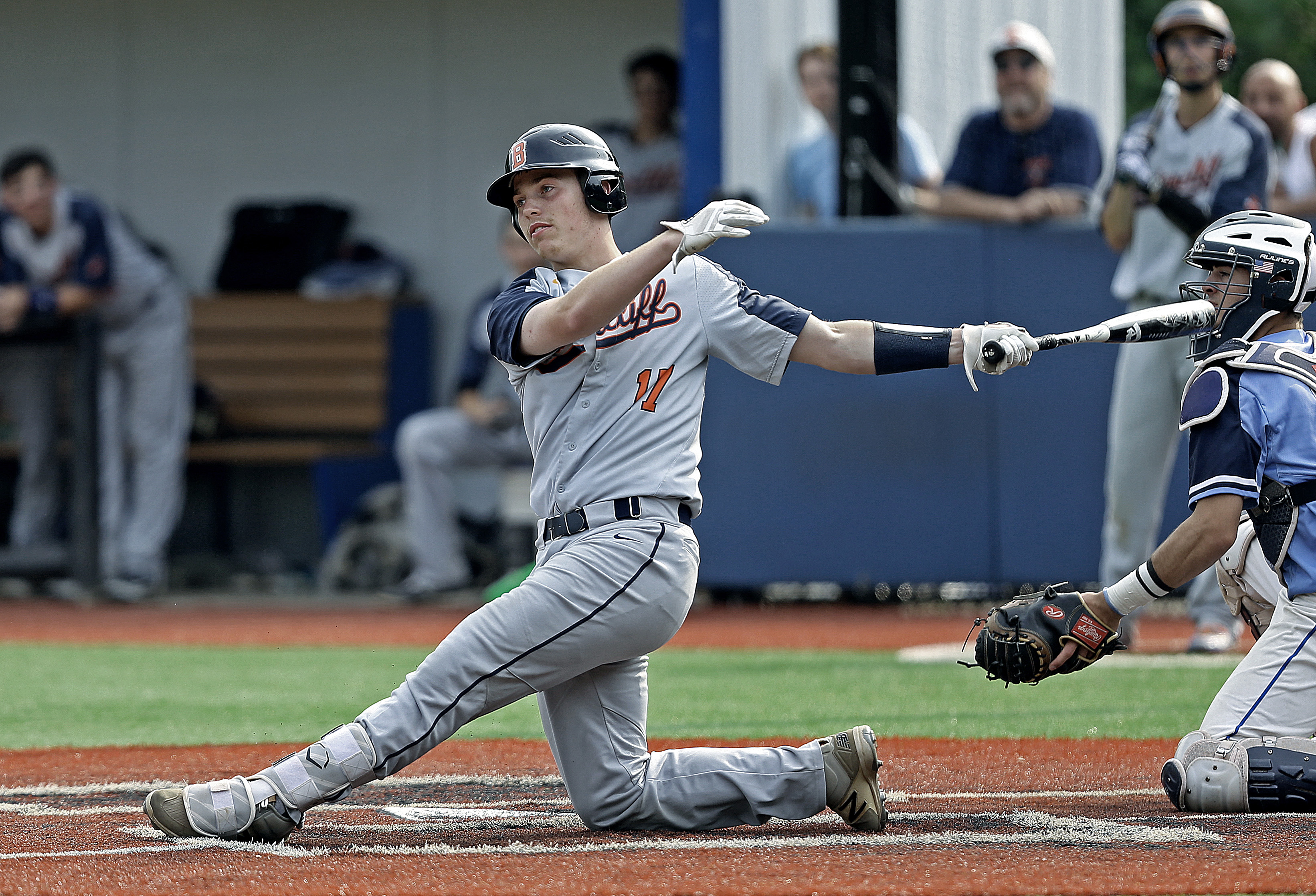 Briarcliff’s Michael Hardy takes a mighty swing in the Class B title game. He had five hits and three RBIs.

In a tense and riveting contest that lasted nearly four hours, it was the second-seeded Bears who quickly jumped ahead on the scoreboard. In the top of the first inning, leadoff batter Jason Oppong walked, then Joe Scanga moved him to second with a single to center. After both runners advaced a base on a wild pitch, Hardy came through by ripping a double down the left-field line to give Briarcliff an early 2-0 advantage.

But Iazzetta, the veteran southpaw, immediately settled down, retiring the next three Briarcliff hitters and stranding Hardy at second base. Westlake threatened in the bottom of the second inning as Mike Mancuso led off with a single to left and Donato also reached when his bunt attempt landed perfectly just over the mound.

The Wildcat threat soon ended, though, as Briarcliff starter Brett Ostrover proceeded to strike out the next three batters. The Bears nearly added to their 2-0 lead in the third inning after two-out hits by Hardy and Pat Poggi. But Hardy was soon tagged out trying to score when a pitch bounced away from catcher Vin Spaziante, who quickly flipped the ball toward Iazzetta, racing in from the mound, for a diving tag at the plate.

“He did a great job pitching, but he did a better job defensively,” said Consorti about Iazzetta, who also made a sparkling catch when he moved to center field and threw out the potential winning run in the top of the ninth. “He saved a few runs out there. He’s been doing it all year. He’s been doing it for four years. He’s a special player. He’s always there, and always for the team.”

Ostrover was able to retire the first two Westlake batters in the bottom of the third, but then Spaziante reached on an infield hit to short and Iazzetta followed with a single to left field. Mancuso’s second hit of the game, a line single into left, brought home Spaziante with the Wildcats’ first run. The throw home got past Hardy, the Bears’ catcher, enabling a second run to score.

Westlake grabbed the lead in the bottom of the fourth inning as Sal Nardone led off with a double to left and, two outs later, scored on a bloop hit by Richie Petrillo just past the outstretched glove of second baseman Anthony Mingoia.

But the Bears, who had to defeat both Keio and Albertus Magnus to advance to the championship round, quickly responded with two runs in the top of the fifth. Mingoia, leading off, slapped a single into right field. A pair of throwing errors by Westlake brought him home. Later in the inning, now facing Donato on the mound in relief of Iazzetta, Hardy drove in his third run of the day with a single to left.

Donato then plunked both Poggi and Ostrover with pitches, loading the bases. But he retired lefty-swinging Dan Huegel on a soft liner that Petriillo caught in left field for the final out. Ostrover, now pitching with a 4-3 lead, was able to retire the Wildcats in order in both the fifth and sixth innings.

Briarcliff had a chance to add an insurance run in the top of the seventh after hits by Hardy and Poggi. But the threat ended when Nardone, the Westlake first baseman, made a nifty short-hop grab following a ground ball to short by Ostrover. That set the stage for a Westlake rally in the bottom of the inning that turned the game into a marathon.

Mike Zulli reached base leading off when his hard grounder toward third caromed off the glove of Julian Matthews. When Ostrover then walked Petrillo on four pitches, his day on the mound was over. Tom Carpenter greeted new pitcher Jared Kulman with an RBI single, tying the game.

Though Petrillo was tagged out overrunning second base, Westlake soon had the bases loaded with just one out following another infield hit by Spaziante and an intentional walk to Iazzetta. But with the Bears’ season on the brink, Kulman stepped up to strike out Mancuso and induce Donato to ground to short, sending the game to extra innings.

Westlake had another big opportunity to end the game in the eighth. But after a walk to Nardone and a single by Zulli, Schrader chose to walk Carpenter intentionally with two outs and runners on the corners. Kulman then retired the dangerous Spaziante on a ground ball to short

“Not that we didn’t have respect for Spaziante,” said Schrader, “but, you know what, I’ve watched Tommy Carpenter hit for four years now and I had a little bit more respect for him. I’ve seen him hit the ball, not just against us, I’ve watched him play against other teams. I didn’t want him to beat us.”

The Bears had a chance to regain the lead in the top of the ninth with Donato back on the hill in place of Iazzetta for the second time. Alex Benson led off with a bloop single over first base and moved to second on a ground out by Oppong. Scanga followed with a single to center, but Benson was called out at home trying to score as Mancuso, now catching, scooped up Iazzetta’s throw up the first-base line and dove across the plate for the tag.

“Two great plays,” said Consorti. “Tommy getting it in and Mike with his athleticism able to catch it and come back and tag him out. That’s the type of kids we have.”

“I thought he did get his hand in,” said Schrader about the slide by Benson. “But the plate umpire thought otherwise and you have to be respectful to the umpire and go with the call he made.”

Both teams left two runners on base in the 10th inning and were retired quickly in the 11th. In the top of the 12th, Iazzetta robbed Ostrover of an extra-base hit with a diving catch in right-center field with one out. The bottom of the inning then turned out to be the decisive one.

With Poggi in his third inning of relief for the Bears, Westlake got a leadoff single from Donata. He moved to second on Nardone’s sacrifice bunt and to third on a balk. Then, on the next pitch after Poggi nearly picked Donata off of third, Pennini, the Wildcats’ designated hitter, lofted a fly ball to center field that easily scored Donata with the run that gave Westlake its first sectional title since 2000.

“To the credit of our kids, they hung in there,” said Consorti, the longtime coach at Briarcliff before joining the Wildcat staff five years ago. “They played defense, they pitched and they kept battling. I knew eventually we’d get one in if we continued to pitch and play ‘D’ like we were playing.”

“A really great game,” said Schrader. “You know what, I’m really proud of my boys. They fought hard right to the end. Hey, in the beginning of the season Westlake was the team to beat. They did beat us, but our boys did show up today and they put up a helluva fight. And I can tell you right now we’re losing seven seniors and when we come back in 2020 we’re gonna expect to be right back here next year.”

That’s a prospect that the Wildcats don’t have to worry about right now. A regional playoff game this week against the Marlboro Iron Dukes right back at Pace on Thursday is their next challenge and their steady lefthander figures to be right back on the mound once again.

“You know what,” said Iazzetta, amid the postgame Wildcat celebration, “we’ve been chasing this for so long, I have no idea what we’re gonna put up there as a goal next. But I’m sure it’s a state championship. That’s gotta be it. But right now we’re gonna celebrate the section championship.”