Skip to content
The Examiner
January 6, 2020 Martin Wilbur Westchester County
We are part of The Trust Project

As thousands marched Sunday in New York City to fight against the growing scourge of anti-Semitism, a Westchester synagogue held its own No Hate, No Fear interfaith service that drew hundreds of worshipers to its sanctuary.

Temple Beth Abraham in Tarrytown welcomed an estimated 500 people through its doors to participate in prayer, songs and words of inspiration and to pledge solidarity to combat hate. Clergy and worshipers from the synagogue and an array of churches, temples and mosques in the area attended the hour-long service under a heavy police presence.

Rabbi David Holtz said unlike other horrific events, including the Tree of Life synagogue shooting in Pittsburgh in October 2018, there was something worse about recent events because there has been what amounts to an escalating pattern of attacks large and small, including the deadly violence at a kosher market in Jersey City, N.J. last month and the recent Hanukkah attack in Monsey.

This time it requires the community to do more than pray together, he said.

“This is a moment for us together to think and pray and to actually think about actual steps,” said Holtz. “Thoughts and prayers only go so far. We then need to figure out what to do.”

Temple Beth Abraham’s Past President Allison Fine, who with Holtz co-organized the event, said that more uncertainty and despair today has seemingly contributed to the spike in hate crimes.

To tone down the rhetoric, Fine said everyone needs to welcome and invite the stranger into their lives so there can be more interaction between people with differences.

Furthermore, schools play a key role in not only teaching students what to learn but how to learn, including helping them distinguish truth from misinformation, Fine said.

Finally, she supported the idea of “public moderators” in communities whose role will be to introduce different communities, and have them share their stories and lives.

Fine and Holtz lamented how synagogues and many houses of worship are now forced to hire armed security guards. Holtz said that it was wrong that any house of worship or public gathering place needs to have that level of security but it has become necessary.

An array of dignitaries also attended the service. Among them was Westchester County District Attorney Anthony Scarpino Jr., who said the county has launched the Westchester Intelligence Center, which shares information, including social media monitoring, with the FBI, Department of Homeland Security and other law enforcement agencies.

Scarpino said while Westchester has had its share of anti-Semitic incidents and hate crimes that have coincided with the national spike, working with all of its law enforcement partners has thus far been relatively successful in preventing a larger attack. But constant vigilance is required. That’s particularly important because incidents of hate appear to feed off each other, he said.

“There is no indication, though, that we in Westchester have any operating group that has demonstrated anti-Semitism,” Scarpino said. “We have individuals, there may be followers, there may be a lone wolf possibly, but we continue to monitor them to avoid that to the best of our ability.”

State Sen. David Carlucci (D-Clarkstown) said he has introduced several measures to address intolerance, including introducing age-appropriate curriculum from the youngest grades through high school to discuss hate and the symbols that are used. Additionally, he is demanding greater accountability from social media companies.

Carlucci also wants to see a detailed database of all hate crimes to see if there are patterns and hot spots to have a better understanding of what’s happening. It’s a proposal that has been championed by Greenburgh Supervisor Paul Feiner.

“We can’t wait for Washington, we can’t wait for another state,” Carlucci said. “We’re New York, we’re 19 million people, we have the most diversity in the country and if we’re going to fight hatred, we have to do it.”

In his parting remarks, Holtz said the time has come for everyone individually to contribute toward fighting anti-Semitism.

“Go forth and change the world,” he said.

Last weekend also saw the toppling of a menorah and vandalism of two churches in Yorktown. 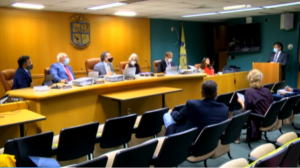 Armonk Ready to Welcome Frosty the Snowman Home on Sunday