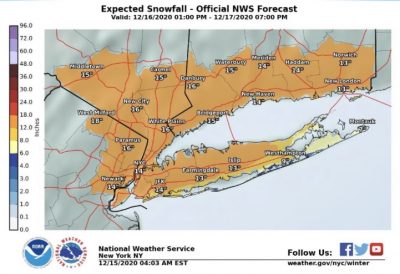 Officials in Westchester and Putnam counties urged residents Tuesday to make preparations for the potentially severe snowstorm that is expected to dump 12 to 18 inches of snow in the area Wednesday night into Thursday.

Westchester County Executive George Latimer said all departments are ready for what will likely be the most significant snowfall in a few years. Forecasters are calling for light snow to arrive by 4 p.m., but pick up in intensity by early evening, falling at a rate of as much as one to two inches per hour.

“This is a serious snowstorm,” Latimer said. “It’s coming a little bit earlier in the year, in December prior to Christmastime, but nevertheless it is a significant snow incident that we’re looking at.”

Westchester will be activating its Emergency Operations Center on Wednesday and Thursday with key personnel on hand before the first flakes start falling, he said. The county has also requested that Con Edison and New York State Electric & Gas (NYSEG) representatives be on hand at the center because the forecast also calls for high winds at the height of the storm along with the heavy snow, which may cause power outages.

The county has also prepared to keep open the thoroughfares it is responsible to clear, particularly the Bronx River Parkway, which extends from the split with the Sprain Brook Parkway northward to Kensico Dam Plaza in Valhalla. If conditions deteriorate too much, it will be closed, Latimer said.

He said the county will look to keep the Bee-Line buses running as long as possible and activate snow routes, if necessary, to keep the vehicles off hilly roads. Service will be discontinued if travel is deemed too dangerous.

In Putnam, County Executive MaryEllen Odell said emergency services will be staffed and ready to respond but called on residents to make common-sense preparations. Residents should have adequate amounts of food, water and non-perishable foods; a supply of essential medications; a battery-powered radio in case power is lost; flashlights and spare batteries; and charged cell phones.

Residents should also prepare to have spare fuel for snow blowers and generators and to fill up your car’s gas tank. Vulnerable neighbors and family members should also be checked.

“I have spoken with Commissioner of Emergency Services Kenneth Clair and we will continue to monitor the situation, but in the meantime, residents should prepare,” Odell said. “This storm combined with the pandemic is going to create challenges but we can be prepared. We are prepared to activate our Incident Command Team should we need to.”

Latimer also said residents should stay home and off the roads during the storm, but if they do need to be out, they should make sure their tires and windshield wipers are in good condition, have a cell phone charger with them in their car, drive slowly and dress warmly.