The Northern Westchester Examiner
April 7, 2022May 4, 2022 Martin Wilbur Rock n’ Rescue
We are part of The Trust Project

Juli Cialone saw firsthand the therapeutic benefits pets could have on people in a rather unexpected scenario.

Cialone had previously worked as a rock n’ roll photographer, capturing images of bands in concert. As she followed the musical artists, she noticed that there seemed to be a steady supply of pets as part of their entourage.

“I noticed they had a lot of animals with them as therapy and as buddies on the road and we were working helping out a lot of rescues in our community just by being active volunteers and we wanted to figure out a way to help out in a different way,” she said.

In 2002, Cialone founded Rock n’ Rescue, an organization that rescues animals and finds families to adopt them.

By 2017, Cialone decided to devote most of her time to the much-needed rescue and adoption work and registered the South Salem-based organization as a nonprofit. There are massive numbers of animals, particularly in the South, where spaying and neutering remain uncommon, shelters are overrun and operators must put down animals.

While most adoptable dogs are often able to have homes found for them, the same hasn’t been true of felines. That is why Rock n’ Rescue’s matching service predominantly involves cats, although it also finds homes for dogs, guinea pigs and other small animals when needed, Cialone said.

“The numbers of euthanasia down South were so significant when it comes to cats, the sweetest of the sweet were being destroyed alongside ones that were unadoptable,” Cialone said.

At least 90 percent of Rock n’ Rescue’s animals come from the South, said James Scova, the organization’s director of communications.

What helps set Rock n’ Rescue apart from other pet adoption services is its matchmaking abilities, that its rescued animals don’t live in shelter cages but get acclimated to homes by going to volunteers’ residences until an owner is found and the organization’s emphasis on how animals can help their owners’ health.

The temporary foster homes helps Cialone judge which pets may be compatible with young children, seniors or other dogs or cats.

Several years ago, Cialone met and brought aboard Marla Valentine, who has helped promote the benefits of pet therapy. Valentine, a longtime social worker, said the pandemic exacerbated depression, anxiety, eating disorders and suicide indicators, particularly among young adults, and the presence of a loving pet can help someone psychologically, physically or emotionally.

“I was a director of social services in nursing homes; 30 years in social work and I left that to join forces with Juli so we can bring animal-assisted therapy into our program here,” Valentine said.

Rock n’ Rescue has partnered with Ann’s Place in Danbury, which provides, comfort, support and resources to people with cancer and their families. It also has various other therapeutic programs involving animals.

“We will go to their center and do kitten therapy with their clientele who either have cancer or have lost someone to cancer or are dealing with it in the family,” Valentine said.

After Rock n’ Rescue became a nonprofit, its reach expanded. But demand for pets has soared during the pandemic, increasing from about 1,400 adoptions a year to more than 2,000 annually, Scova said. It has found homes for pets throughout the Northeast, but Westchester, Putnam and Fairfield counties is its base.

One outgrowth of the pandemic has been curbside adoptions over the past two years. Cialone said prospective pet owners can visit Rock n’ Rescue’s website to look at photos of the cats, dogs and other animals available for adoption.

If someone has found a pet they are interested in, a meet-and-greet will be arranged. Cialone said by the time it reaches that stage, the chances of adoption are overwhelming. To a cat or a dog, someone’s car gives them a good sense of what their potential adopter is like.

“I know it sounds weird, but it actually ended up being a COVID policy that we’ve been doing and now it’s so popular that we’re keeping it,” she said.

Any adopted pet will be up to date with its shots to the extent that their age allows.

Rock n’ Rescue also is eyeing an expansion, looking for a suitable location for a welcome and wellness center, where the meet-and-greets and therapy sessions can be done. 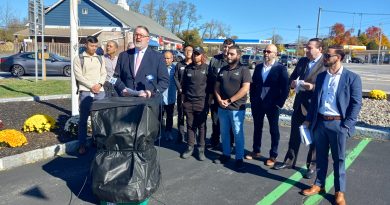