By Martin Wilbur and Anna Young

With hate crimes and bias incidents soaring across the region and in communities nationwide, Westchester County officials have launched a new campaign to ensure immediate assistance is provided if a crime occurs.

The campaign, coined #SpeakUpWestchester, is designed to encourage residents to report incidents if they become a victim or witness a hate crime, bias or hate incident. Since the start of the coronavirus pandemic, attacks on Asian Americans have spiraled across the United States.

County Executive George Latimer said the targeting of Asian Americans or any group is condemned strongly in Westchester. While there hasn’t been an uptick in incidents across the county, officials want to send a clear message that the threat is taken seriously.

“We obviously condemn any act that targets a person or group because of their actual or perceived races, color, national origin or ethnicity, ancestry, gender, identity, sexual orientation, age, disability,” Latimer said. “Not every hate incident violates the law but they should still be reported and you have the 911 tool to report crimes of a certain nature.”

Part of the campaign includes social media graphics available in English, Korean, Mandarin, Japanese and Spanish, with instructions on what to do and who to contact if a crime has been committed. Communities are encouraged to share them on all platforms using the hashtag #SpeakUpWestchester.

To encourage more reporting, the county’s Human Rights Commission has launched a new webpage to report incidents of bias, hate or discrimination anonymously or with your contact information at www.westchestergov.com/biasreporting.

John Hodges, chief of investigative services for the county Department of Public Safety, said all of the local police departments along with his department, the district attorney’s office and the Human Rights Commission have devised a reporting process that includes hate and bias crimes and incidents that can be accessed by all of the agencies.

Hodges urged all residents who witness or are victimized by what they believe is a hate or bias crime or incident to report it to police or the commission. 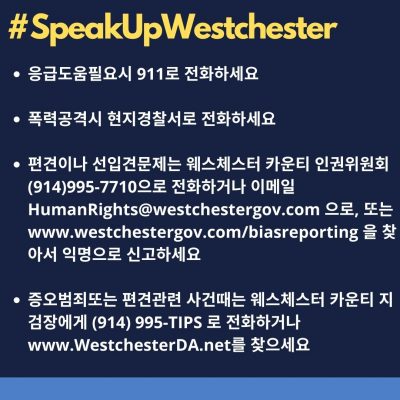 “We now have every singly police department in the county – cities, towns, villages – everyone single one participates and has a person who’s assigned either on a full-time or part-time basis to the Real Time Crime Center, and that’s important because the allocation of information on a timely manner is very important,” Hodges said.

The public can call the hotline at 914-955-8477 or report a crime through the website www.WestchesterDA.net. 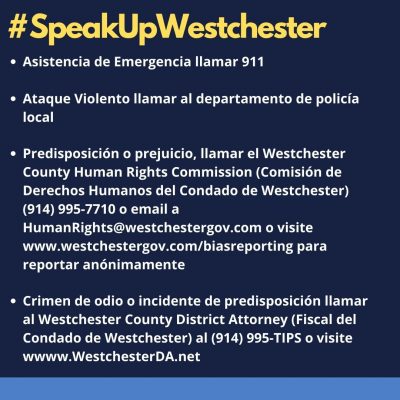 The hotline is available around the clock every day of the year in English, Spanish and Mandarin and will automatically notify the district attorney’s office whenever a call arrives. Additional languages will be added in the coming weeks, Rocah said. The caller will then be directed to voicemail boxes to leave information.

Rocah added that experienced coordinators have been designated for each hotline category, with a member of the investigative team assigned to follow up on all complaints received. The office has also launched the first in a series of promotional videos to promote the hotlines on social media and online.

Last Thursday, the Village of Pleasantville and the Pleasantville School District issued a joint statement condemning the rash of racist attacks against Asian Americans and Pacific Islanders that have escalated around the nation.

“Here in Pleasantville, we do not and will not stand for hate,” the statement read. “We remain committed to educating ourselves about discrimination of all kinds and taking concrete steps to make those in our schools and community feel safe and accepted.”

Mayor Peter Scherer said the effort is to signal to the Asian American families who live locally and to the village at large that racism will not be tolerated.

“It’s simply driven by an effort to stand in solidarity with those who are in pain over what happened (in Atlanta) which, obviously, ought to be all of us, but also to make clear there’s bias in lots of places and we need to look for it,” Scherer said.

Superintendent of Schools Mary Fox-Alter said it was critical that the school district, which has included inclusivity and education programs for students on an ongoing basis, put that into practice.

“We certainly felt it was super important that we tell our school families and our greater community in Pleasantville that we stand with them, we’re here to support them and we as a school district and as a village condemn racism,” she said.

Check out the following features from The Examiner News on Substack:
Keeping Up with the Kontours of Fame
Spa-ahh!
The Puppy Diaries
Shuck Those Oysters!