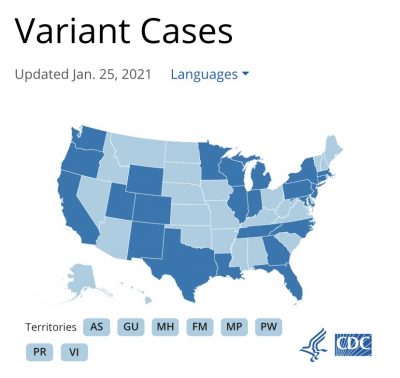 As two more cases of the United Kingdom variant of COVID-19 were confirmed in Westchester County last week, the Department of Health in conjunction with local school districts are determining if high-risk athletics can resume next month.

Last Friday, Gov. Andrew Cuomo made known that Westchester had its third case of what’s deemed a more contagious strain of the virus. To date, there are 25 confirmed case of the variant in New York State.

Health officials warn the new variant is up to 70 percent more transmissible than earlier versions of the virus, but there is currently no evidence showing the new variant causes more severe illness or increased risk of death. The U.K. variant may become the dominant strain circulating domestically by March.

However, the Centers for Disease Control and Prevention (CDC) asserts that an increase in cases will put more strain on health care resources, lead to more hospitalizations and potentially more deaths. Officials are also wary of other strains from South Africa and Brazil.

Despite Cuomo referring to these new strains as “frightening,” he announced high-risk high school sports can resume Feb. 1. He initially postponed them when COVID-19 rates began to surge late last year.

Sports, including basketball, football, ice hockey, competitive cheerleading, volleyball, wrestling and boy’s lacrosse, can only proceed if county health departments believe they can be played in compliance with safety protocols.

Westchester County Executive George Latimer said local health officials are working with school superintendents and other county executives in the Hudson Valley to reach a decision that would ensure testing, protective gear and other protective resources are provided if approved.

“It’s quite a decision but we’re happy to have the responsibility in these areas,” Latimer said during his Monday briefing. “We have tasked the schools with coming back to us with a plan.”

If athletics resume, he anticipates testing will increase significantly and sanitation protocols will need to be heightened. Latimer added that he expects a joint statement will be released later this week.

“Westchester can’t act unilaterally,” Latimer said. “We want to make sure that if we open this up that we do it in a safe fashion.”

Here are the latest updates on Jan. 26 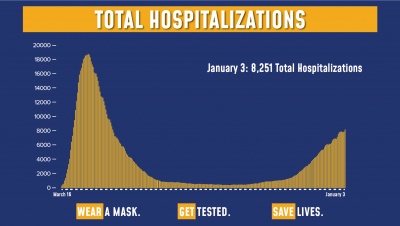 As active cases of COVID-19 slowly decline in Westchester and Putnam counties, both areas continue to see the fatality rate rise and daily testing remain in the thousands.

Coronavirus cases in Westchester increased by 804 on Monday, bringing the total number of positive cases to 90,029 since the start of the pandemic. There are now 11,495 active cases, a decrease of 163 over last week.

“We were getting roughly the same amount of positives two weeks ago as we are now,” Latimer said. “I now think we’re starting to see the end of the spike that we got during the holiday season.”

The county’s daily positivity rate is 6.5 percent, with 12,366 tests administered on Saturday. Overall, more than 1.71 million COVID tests have been taken in Westchester since March.

The county reported five more deaths, bringing the COVID-19-related death toll to 1,851. In the last week, 54 people have died from the virus in Westchester, with 176 fatalities since the start of the new year.

“The number of those we lost have been growing in a more significant fashion compared to going through long periods of time where we had no fatalities during the summer,” Latimer said. “Both the fatality number and hospitalizations are still significant, and we continue to look at the outbreaks as one that is very serious because now we’re dealing with the U.K. variant.”

As of Monday, there are 550 virus patients in Westchester hospitals, a decrease of 17 since last Thursday. Latimer said hospitalizations, while sizable, are still less than half of what the peak number of hospitalizations was during the height of the pandemic last spring.

As of Monday, the county government has directly administered 16,165 vaccines to eligible residents, Latimer said, with 12,838 individuals inoculated since the County Center became a distribution site on Jan. 13. The county health department has immunized 3,327 people, he said.

Click HERE to see if you’re eligible to make an appointment.

Putnam currently has 1,160 active cases, a decrease of 125 over last week.

Statewide there were 12,003 new positive cases on Monday. The daily positivity rate is 5.47 percent.

Statewide hospitalizations stand at 8,730, an increase of 117 over the previous day. Across New York there have been 1,338,990 positive coronavirus cases since the start of the pandemic.

Check out the following features from The Examiner News on Substack:
Take a Detour to These Tranquil Hidden Gems in the Hudson Valley
The Illustrious Wonder That is One Superstar Shannon Becker
A Vegetarian's Guide to the Best Pizza in Westchester County