Skip to content
Generic SPORTS
May 31, 2017 Andy Jacobs
We are part of The Trust Project

Anyone looking for drama, suspense and intrigue probably should have avoided a visit to North Rockland High School for the Section One, Class B championship game on Saturday afternoon.

That’s where the Valhalla Vikings jumped on top-seeded Rye Neck for three runs in the first inning and four more in the second, then spent the rest of the overcast day pouring salt into the Panthers’ wounds on the way to a lopsided 11-0 victory. Jillian Caldarola pitched her third successive playoff shutout and Giana Bencivengo drove in five runs as the Vikings ended their two-year title drought with a commanding performance reminiscent of some of the others by the school in the not-too-distant past.

“Very rewarding, but more rewarding just because this is a brand new group,” said Vikings coach John Hayes amid his team’s postgame celebration on the infield. “They’re all young. If they’re not freshmen and sophomores, then it’s their first year on the varsity.”

The third-seeded Vikings, with just two seniors on their roster, wasted no time getting on the scoreboard against a Panther team they had edged midway through the regular season. Bella Riguzzi led off with a walk and Caldarola followed with a single to left field. Bencivengo then smacked a single to center to drive in her first run of the game and provide Caldarola with all the support she would need.

Both runners had advanced a base on the throw to the plate and Caldarola soon scored when a short fly to right field by Deanna Yurus was dropped. One out later, a grounder to third by Juliana Abbondola brought home the Vikings’ third run. In the bottom of the first, Caldarola, who wound up with five strikeouts on the way to pitching a two-hit shutout, retired Rye Neck in order.

The Vikings’ Breanna Ciardullo singled to the opposite field with one out in the second inning and Caldarola did exactly the same thing with two outs. That set the stage for Bencivengo’s biggest hit of the day. The slugging first baseman sent an Olivia Dunn pitch high and far over the fence in right-center field for a three-run homer that doubled the Valhalla lead and broke the game open.

“Ah, it was a little bit of a relief, no doubt about it,” said Hayes about the long blast by Bencivengo. “Olivia Dunn’s one of the best pitchers and getting three runs is great. But if the other team gets a momentum swing, you know, it’s right back to 3-3. To put that shot up, Gianna, can’t say enough about her. She zoned in, let the ball get in on her and then drove it over the right-center gap.”

The Vikings didn’t let up one bit after Bencivengo’s home run. Yurus immediately followed with a single to left and then scored when Kaitlyn Doherty slammed a double over the head of the left fielder, stretching the Valhalla lead to 7-0.

Caldarola yielded her first hit of the game, a double down the line in left, to Alexa Garcia with two outs in the bottom of the second, but got out of trouble when second baseman Abbondola made a sparkling play on a grounder up the middle by Jamie Strazza. In the third inning, Caldarola struck out the first two Panthers, then surrendered Rye Neck’s final hit, a bloop single by Dunn. The inning ended when center fielder Riguzzi ran down Jessica Santoli’s long drive to the gap in right-center field.

Caldarola wound up retiring the last 13 Rye Neck batters she faced, and the outcome, if it wasn’t already decided, certainly became a foregone conclusion when Valhalla added two more runs in the fifth inning. Bencivengo had another run-scoring hit in the frame, and the overwhelmed Panthers made two of their six errors on the afternoon as they fell behind 9-0.

The Vikings wound up with 14 hits against Dunn and reliever Alicia Rodriguez and scored their final two runs in the sixth as freshman Christina Ferrara ripped a two-out single, Emily Strupinsky reached on an error and then Ciardullo drilled a double to the gap in right-center field to drive home both of them.

An inning later, Caldarola quickly retired the final three batters, the last of them harmlessly flying out to right fielder Ciardullo and setting off a Viking pile-on celebration near second base.

“There’s no superstars on this team,” said Hayes, who coached a few en route to winning six consecutive sectional titles before Rye Neck surprisingly ended the streak in 2015. “That’s the best part, there’s no superstars. They all work together. They bought into what we were selling, and they’re just a great bunch of kids.”

Even Hayes might have had a hard time believing his young and inexperienced team could accomplish what it just did, blanking Hastings, Westlake and Rye Neck in succession to get back on the Class B throne.

Fortified Wine: It’s Time it Receives the Recognition it Warrants 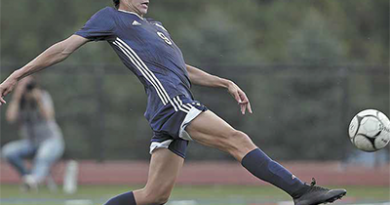