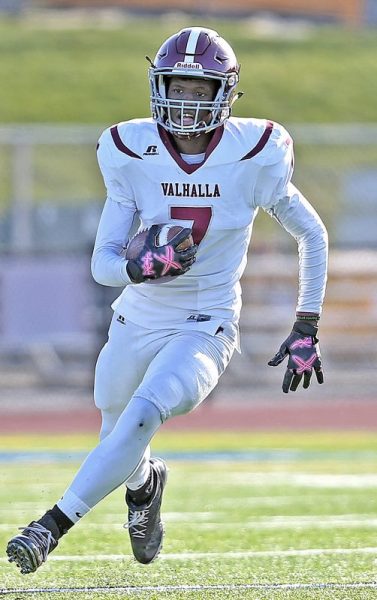 In the span of two months, they had transformed themselves from hapless to heroic. But as they stood together in a jagged line near midfield during a postgame ceremony on Saturday afternoon, with heads bowed and tears in their eyes, the players on the Valhalla football team were suddenly faced with the realization that their dream of a state championship had come to an end.

Just moments before, quarterback Michael Dawson’s pass on the run in the final two minutes had been picked off by Gouverneur’s Joseph Cummings, sealing the Vikings’ fate and assuring Section 10’s Wildcats a come-from-behind 14-11 victory in a Class C state semifinal playoff game at Middletown High School’s Faller Field.

“I’m proud of them,” said Vikings head coach Stephen Boyer afterwards, asked what he would soon be telling his dejected players in the locker room. “It’s been a great season. It’s a dream. They carried it as far as they could. We were one half away from the (Carrier) Dome. You know, sometimes you’ve got to give the other team credit.”

On a day when Valhalla possessions were few and touchdowns were hard to come by, an 11-point Viking lead midway through the third quarter eventually gave way under the pressure of the undefeated Wildcats’ relentless ground game. A two-yard touchdown run by Mitchell Tyler with just five and a half minutes remaining capped a 15-play, 66-yard drive that gave Gouverneur its first lead of the contest.

“They had the ball. We didn’t have the ball much,” said Boyer. “They controlled the ball and kept us off the field. I give them credit. This is what they do and that’s their strength. We stopped ‘em early on. Maybe got a little tired. They got some extra first downs and just kept the clock going.”

For a while, though, it seemed the Vikings, who began the season with two losses and needed overtime in week three to start turning their fortunes around, would be the ones playing this Friday evening up in Syracuse for the state championship.

A 21-yard field goal by Elias Gonzalez on the final play of the first half broke a scoreless tie and then the Vikings turned the clock back more than 30 years in the third quarter, evoking memories of William ‘The Refrigerator’ Perry, when sizable lineman Francesco Falco bulldozed his way into the end zone for a four-yard touchdown. Sammy Mussuto followed by turning a misplayed snap on the extra-point try into a two-point-conversion run and Valhalla took an 11-0 lead with 6:42 to go in the third period.

There’s no telling if the eventual outcome might’ve been different had it not been for an accidental whistle early in the second quarter that negated Valhalla’s block of a Wildcat field goal try. Falco had scooped up the ball with no one in front of him and, though he likely would’ve been caught from behind, the Vikings certainly would have had possession near midfield with some sudden momentum.

“They said inadvertent whistle, the play’s dead and replay the down,” said Boyer about the explanation he was given by the officials, one of whom had obviously confused the short field goal with an extra point. “Who knows, but one play didn’t decide this game.”

Even though the Wildcats’ subsequent fourth-down bid for a touchdown was stopped a yard shy of the end zone, the botched call left Valhalla losing the battle for field position for the next five minutes until Mahari Davis Jr. picked off a deflected pass to thwart another Gouverneur threat with 3:43 left in the half.

The interception by Davis set the stage for Dawson, in the final minute of the second quarter, to complete a third-and-24 pass to Daniel Tammaro over the middle for 22 yards and then a Hail Mary toss toward the end zone that was snared in a crowd by Rahsean Melvin at the 4-yard-line. With 2.8 seconds on the clock, Boyer turned to Gonzalez to provide the first points of the game with his foot.

With possession to start the second half, Valhalla moved the ball 65 yards in 11 plays, the biggest of them being Dawson’s 24-yard pass play to Tammaro on fourth-and-seven down to the Wildcat 7-yard-line. On first down, Falco picked up three yards. He then plowed into the end zone on the next play and, with Mussuto’s two-point conversion, it seemed the Vikings were on their way to the Carrier Dome.

But the Wildcats responded with their own 65-yard scoring drive, finally getting on the scoreboard when Cayden Stowell twisted his way into the left side of the end zone from 13 yards out. Stowell soon darted off left tackle for the two-point conversion that cut the Valhalla lead to 11-8 with 1:51 left in the third quarter.

In the fourth quarter, the Wildcats not only grabbed the lead on Tyler’s short TD run, they managed to keep the ball for the first nine minutes thanks to a squib kickoff that caromed right off the foot of an unsuspecting Viking and gave Gouverneur an extra possession. Valhalla didn’t get the ball again until there were only three minutes remaining.

Three incomplete passes and a false start soon left the Vikings facing fourth-and-15 at their own 7-yard-line. But Dawson still had a little magic left in his standout sophomore season. His long jump-ball pass was again brought down out of the sky by the leaping Melvin for a first down at the Valhalla 42. On the next play, Dawson connected with Tammaro once more for another first down inside the Wildcat 40.

Unfortunately for the Vikings, when Dawson then rolled to his right and threw on the run toward Melvin again, Cummings read the play and jumped in for the interception that put a halt to the Viking comeback bid. Gouverneur was able to run out the clock and stop Valhalla’s memorable winning streak at eight games.

“I can look back on it,” said Boyer about the final fateful pass that ended the Vikings’ dreams, “but our kids just kept going, fighting, and I give them a lot of credit. It’s been great for the program, great for the school and great for the community.”