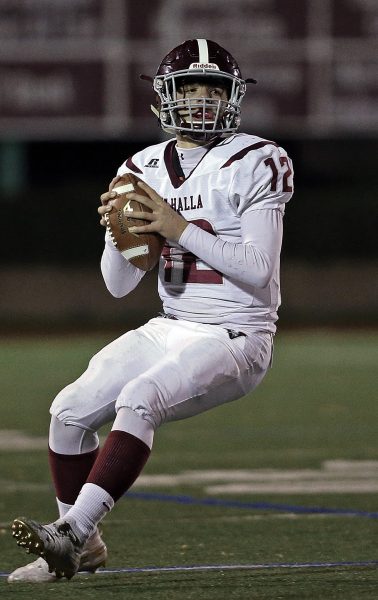 Quarterback Michael Dawson gets set to throw the
ball in Valhalla’s regional win over Chester.

The Valhalla football team continues to grow up right before our very eyes.

Playing with poise and purpose that seems to increase by the week, the Vikings took control in the first half on Friday night with a pair of big touchdown plays and went on to a 19-8 victory over Section 9 champion Chester Academy in a state regional Class C final at Dietz Stadium in Kingston.

“It’s just amazing. It gets more amazing each week, what these kids do,” said Vikings head coach Stephen Boyer after watching his team win for the eighth consecutive time following its 0-2 start. “The kids did great. We didn’t have many penalties. We scored early on them and I think we just took the wind out of their sails.”

Mahari Davis Jr. scored on a 47-yard pass play on the Vikings’ second possession of the evening and later tossed a 31-yard touchdown pass on an option play to a wide-open Sammy Mussuto, staking Valhalla to a 14-0 lead that its ever-improving defense was not about to relinquish.

Chester had scored six touchdowns in trouncing the host Vikings when they met in the season opener back in early September. But this time, with the stakes much higher, Valhalla’s defense rose to the challenge and kept the Hambletonians off the scoreboard until late in the final quarter.

“Defensively, they were all over the field today,” said Boyer. “Our secondary played great. Our goal was to contain and put a lot of pressure on the quarterback, and I think we did throughout the whole game. Coach (John) Consorti did a great job with our defense and we are moving on.”

For a few moments early in the contest, though, it seemed Chester might have the same kind of success it had the first time around. Running back Jacob Angeles burst up the middle 53 yards all the way to the Viking 14-yard-line on the Hambletonians’ second play from scrimmage. But a couple of penalties stalled their drive and Valhalla eventually took over on downs.

The Vikings wound up moving the football 69 yards in four plays, the last 47 coming when quarterback Michael Dawson tossed a short pass to the left to Davis, who deked one defender, then another, and raced down the left sideline for a touchdown. The point-after kick from Elias Gonzalez gave Valhalla a 7-0 lead with 5:07 remaining in the first quarter.

“Once we got that touchdown,” said Dawson, “we knew this was gonna be a different game.”

On the final play of the first quarter, Chester quarterback Joe Battiato connected on a 37-yard pass play to Kevin Stein down to the Valhalla 40. But once again, the Hambletonian threat was thwarted by penalties. Just past the midway point of the second period, a poor snap during a Chester punt gave the ball to the Vikings at the Hambletonian 31-yard-line. 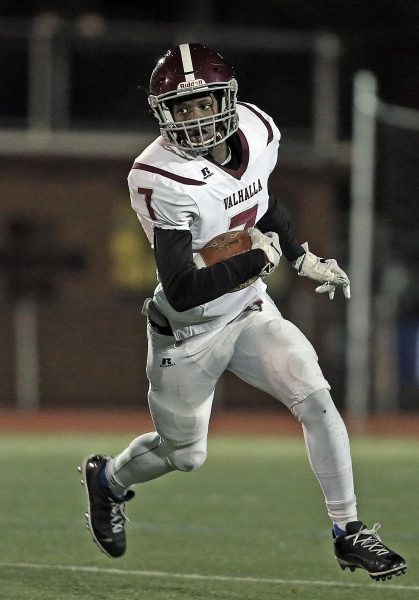 The Vikings’ Mahari Davis Jr. carries the football during
the first half of last Friday’s state regional final.

On first down, the ball was handed to Davis, who then threw it down the right side of the field to Mussuto, standing in the secondary all by himself. The Vikings’ second touchdown of the night was followed by another Gonzalez PAT, stretching the lead to 14-0 with 5:47 left in the half.

Another Chester second-quarter threat fizzled when the Vikings’ Joe O’Neill recovered a fumble at the Valhalla 31-yard-line. The Vikings later took possession of the ball again at the Hambletonian 43 with just 45 seconds left before halftime. A 23-yard pass from Dawson to Mussuto, followed immediately by a 10-yard pass to Daniel Tammaro, set the stage for a 32-yard field goal by Gonzalez on the final play of the half that gave Valhalla a 17-0 cushion.

“That was awesome. That was great,” said Boyer about the three points Gonzalez provided just before intermission. “I mean, we just barely missed two plays in the end zone. We got pushed out of bounds. But we have a weapon in Elias Gonzalez. So that made it a three-score game. That was very important.”

The second half began with Chester moving the ball all the way to the Vikings’ 5-yard-line. But two running plays went nowhere and then the southpaw Battiato, who was pressured into a 12-for-40 passing night, threw consecutive incompletions that ended the drive.

More frustration awaited the Hambletonians late in the quarter after punt returner Alex Buchanan was swarmed by the Valhalla defense and tackled at the Chester 9-yard-line. Battiato was sacked for a six-yard loss on first down, then brought down in the end zone on the next play for a safety. With just over a minute left in the period, the Vikings’ lead was up to 19 points.

“Yeah, the defense did great today,” said Dawson. “Coach Soup (Consorti) added a bunch of new schemes and it all worked out. He’s a great defensive coordinator.”

With his team’s state title hopes quickly fading early in the fourth quarter, Battiato threw a screen pass on third-and-10 to Angeles, who turned it into a 64-yard pickup. But the Hambletonians got no closer than the Vikings’ 12-yard-line, and four incomplete passes, along with a big penalty, stopped them again.

They finally managed to get on the scoreboard with four minutes remaining after Battiato, on a fourth-and-10 play, passed over the middle to Jacob Delgado, who ran for an 80-yard gain to the 2-yard line. One play later, Stein ran in for the Hambletonian touchdown. He then tossed to Battiato for the two-point conversion.

Unfortunately for Chester, the ensuing onside kick was controlled by the Vikings. When the Hambletonians did get the ball back again, there was just 2:09 left on the clock. Battiato threw four more passes that fell incomplete, the last one under heavy pressure, and then the Vikings’ Dawson, named the offensive most valuable player for the second week in a row, took a knee three straight times to run out the clock.

“It feels great,” said Dawson, asked about winning another MVP award, “but it wouldn’t be like this if I didn’t have the athletes on the outside and the good offensive line.”

The Vikings, winless after their first two games and fortunate to beat Highland on the road in overtime in week three of the season, are now just two victories away from a state championship.

“I wouldn’t say it’s crazy because I knew this team had it in them,” said Dawson. “Once we got that win (at Highland), we wanted more and we just kept on going.”

Next for the Vikings comes a state semifinal matchup against Section 10’s Gouverneur at Middletown’s Faller Field this coming Saturday, with a noon kickoff. The Wildcats are 10-0 this season and have scored at least 42 points in seven of their games.

For the Vikings, it might be a bit hard to comprehend how far they’ve come since that overtime win at Highland turned the season around.

“Amazing,” said Boyer. “Little did we know back then that we’d be in the regional finals here. Basically, we had lost nine games in a row from back to last year. So we just kind of saw what it takes to win and I think the kids have continued that. They had to learn how to win. We know how to win right now. It’s kind of like a dream, we just keep going.”