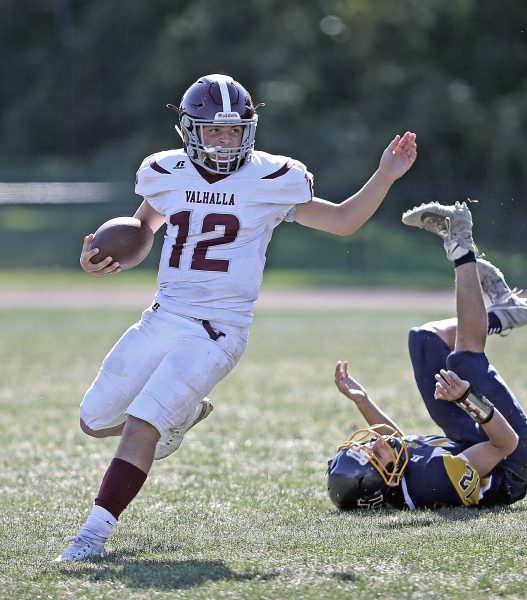 In a back-and-forth game that featured four touchdowns apiece by the two teams, it took a huge defensive play to finally decide the outcome.

Rahsean Melvin’s block of an extra-point try in overtime set the stage for the Valhalla Vikings to soon eke out the narrowest of victories against the host Highland Huskies. Michael Dawson’s fourth touchdown pass of the day tied the score for the fourth time and then kicker Elias Gonzalez split the uprights with the point-after that sealed a 28-27 Viking victory on Saturday afternoon.

“It was a great game by both sides and came down to who made the last play of the game,” said Valhalla head coach Stephen Boyer amid the euphoria created by his team’s overtime heroics. “It was exciting. I was getting ready to use my magic two-point play that I used against Pleasantville and Nanuet the last two years. That was coming if we needed to go for two to win the game.”

Under a cloudless blue sky on an unseasonably warm late summer day, a modest crowd that had resisted the temptation to instead go apple picking at the orchard next door watched as two extremely hungry teams battled each other in search of their first win of the 2019 season.

Highland, demolished by a collective 96-3 in its losses this year to Section 9 foes Goshen and Marlboro, took advantage of a Viking first-quarter turnover to get on the scoreboard first. Jagger Lisa’s short flea-flicker touchdown pass to a wide open David Post, followed by Gino Mazzella’s point-after kick, gave the Huskies a 7-0 lead with five minutes left in the opening period.

But the Vikings quickly responded, marching 80 yards in six plays, highlighted by Dawson’s first TD pass of the day, 51 yards to Sammy Mussuto. The PAT by Gonzalez tied the score with 2:14 remaining in the first quarter. Valhalla, though, squandered the chance to take the lead after recovering a fumble at the Husky 23-yard line on the ensuing kickoff.

Instead, Highland regained its advantage after taking over on downs at its own 28. On third-and-seven, quarterback Brian Joyce found Lisa over the middle near midfield and the senior wide receiver raced all the way to the end zone for a 73-yard touchdown. Mazzella’s kick gave the Huskies a 14-7 edge with just 7.9 seconds left in the quarter.

“Our defense let ‘em loose,” said Boyer, reminded afterwards that Highland hadn’t crossed the goal line yet in its previous games. “They scored a couple nice touchdowns on us. We’ve got to get more disciplined in what we do, offensively and defensively. It’s very coachable and we’ll focus on that this week.”

The Vikings, again forced to start from their own 20-yard line because of the powerful leg of Mazzella, who easily booted each of his kickoffs into the end zone, answered once more with another 80-yard scoring drive. This one lasted 10 plays, featured a 30-yard pass completion to a leaping Mussuto and ended with Dawson passing over the middle to Mahari Davis Jr. for an 18-yard touchdown. The extra point by Gonzalez tied the score for the second time.

Davis also provided a spectacular one-handed interception on Highland’s next possession, but the Vikings then went three-and-out. The Huskies appeared to take the lead yet again in the final minute of the half when Matt Champagne returned a punt 60 yards, but his TD run was called back by a penalty and the teams walked off the field at halftime still tied at 14-apiece.

A Highland fumble early in the third quarter gave the Vikings the ball at the Husky 36. After a 21-yard run by Joseph Nolan and, a few plays later, a flag on the Huskies, Valhalla had the ball at the 1-yard line. But Dawson, who threw for 265 yards, was stopped short twice and on fourth down the Vikings fumbled the snap, ending the threat.

“Yeah, we should score inside the 5-yard line,” said Boyer. “We ran the quarterback two or three times and then we had a missed snap in a wildcat formation. You can’t have that.”

Valhalla couldn’t take advantage of Daniel Tammaro’s interception with just over four minutes left in the third quarter, quickly turning the ball over on downs at the Highland 26. But the Vikings finally grabbed the lead for the first time late in the period as Dawson connected on first down with Davis for a 35-yard touchdown. The PAT by Gonzalez gave Valhalla a 21-14 margin with 1:07 to go.

It took Highland just one play to catch up again. Joyce, the Huskies’ mobile quarterback, got to the left sideline and raced 76 yards for a touchdown. Mazzella’s point-after tied the game for the third time and the teams headed to the fourth quarter even at 21-21.

“We didn’t contain the quarterback, who was very fast and shifty,” said Boyer. “75 yards later, the game’s all tied up.”

After a Dawson pass was picked off near midfield halfway through the fourth quarter, Highland had another apparent touchdown, on a 34-yard pass play, nullified by a penalty. Mazzella eventually attempted a 57-yard field goal with 95 seconds left, but his kick landed wide and well short. Dawson had a go-for-broke pass intercepted near the end zone by Lisa in the final half minute and the game soon shifted to overtime.

Starting from the Vikings’ 20, it took Highland three plays to score its go-ahead touchdown, a 10-yard run by Joyce. But on the extra point, Mazzella’s kick was knocked out of the air by the leaping Melvin. Valhalla then evened the contest again when, on first down, Dawson connected with Davis on a pass to the right for a 20-yard TD.

Gonzalez had to wait a bit longer than he might’ve wanted before sending everyone home with his point-after kick that easily sailed over the crossbar and brought an instant celebration to the Valhalla sideline.

“The kids know we have a really good kicker in Elias Gonzalez,” said Boyer. “As long as we can block for him, he’ll put the ball through. You saw what happened.”

With their first victory secured, the Vikings’ long bus ride home figured to be a lot more fun than the trip north.