Skip to content
Environment The Examiner
January 16, 2023January 19, 2023 Abby Luby Bedford
We are part of The Trust Project

We’ve all seen the thick, impenetrable tangle of vines along the Saw Mill River Parkway choking off trees and shrubbery. And the creeping labyrinths of wisteria, English ivy, kudzu or bittersweet taking over our backyards.

A growing number of plants and trees long identified as dangerous, invasive species threaten native plants, insects and animals, ultimately impacting the area’s biological diversity. The battle has engaged garden clubs, park and environmental conservation departments and chapters of vine cutters, all aimed at educating the public about how to eradicate invasive plants.

Education comes by way of the documentary film “Uninvited: The Spread of Invasive Species” and will be shown next Monday, Jan. 23 at 7 p.m. at the Bedford Playhouse as part of the Bedford 2030 environmental film series.

For well over a decade, Bedford 2030 (previously known as Bedford 2020) has created and backed a variety of programs aimed at establishing carbon-neutral, sustainable communities and reducing greenhouse gas emissions, one of the main causes of climate change. The group was the first in Westchester to adopt a Climate Action Plan.

The film, produced by Westfield Production Company and the New York State Department of Environmental Conservation, is an informative documentary about the damage invasive species cause to New York’s natural environment, communities and ultimately the economy, especially when it comes to property values, public utilities and outdoor recreation programs.

“The film is captivating and very well done,” said Bedford 2030 Program Director Eve Hundt. “It tells how we lose native plants and trees that are overrun by invasive species. That means losing insects and the species who eat those insects and how the threat is expansive. Biodiversity a huge issue for us.”

Speakers discussing the film after the viewing are Donald Arrant, Jessica Schuler and Budd Veverka.

Arrant, co-owner of Fat and Sassy Goats, LLC based in the Hudson Valley, created a method of training goats to graze on invasive species of plants, primarily multiflora rose.

Schuler is the program coordinator of Natural Resources for the Westchester County Department of Parks, Recreation and Conservation. As a longtime horticulturist and ecological restoration practitioner, Schuler has worked to conserve biodiversity through sustainable land management.

Veverka has been the director of land management at the 1,000-acre Mianus River Gorge since 2016, where he focuses on invasive species management, northeastern forest restoration, suburban black bear activity, white-tailed deer management and student mentorship.

According to Veverka, there are 45 invasive species he constantly targets to eliminate.

“You’re looking at everything from low ground covers to trees,” he said.

A big stumbling block for Veverka is finding landscapers who know how to properly get rid of invasive plants and trees on a large scale. Chemicals that are safe environmentally friendly are used.

The film had quickly sold out for the smaller 40-seat theater at the Bedford Playhouse and will now be shown in the 160-seat theater to accommodate more viewers. “Uninvited: The Spread of Invasive Species” has a 52-minute run time. The film will be followed by a discussion.

The Bedford Playhouse is located at 633 Old Post Rd. in Bedford Village. 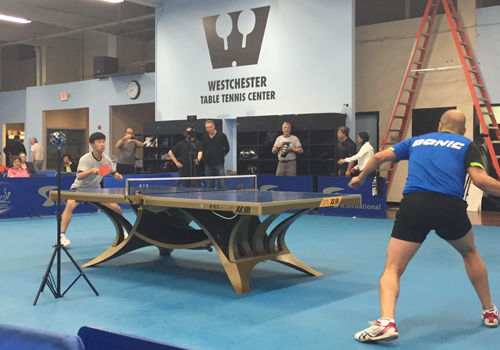