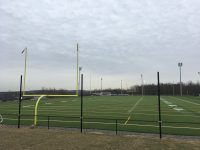 Just in time for spring, two multi-purpose turf fields at the Granite Knolls Sports Complex off Stony Street in Shrub Oak are being targeted to open for use next week.

Yorktown Parks Superintendent Todd Orlowski said final preparations are being made to open the gates to the $6 million facility on Monday, April 15.

Sports enthusiasts in town were hoping the state-of-the-art sports complex would be ready for action last spring but a lengthy wet and cold winter, coupled by drainage problems, put a damper on those dreams.

The site, located next to the former Phoenix House, now occupied by Shrub Oak International School, was purchased by the town in 2010 for passive recreation and was used by Yorktown Athletic Club football for practices.

Montesano Bros., Inc., owned by a Yorktown resident, submitted the winning bid of $3.8 million for the project, but that price tag did not cover the cost of the turf and some of the buildings. Last year, the Town Board authorized the transfer of $2.2 million into a fund for the project which started with approximately $6 million. The transfer was to cover the purchase and installation of lights at the complex, and other expenses.

Gilbert, who noted his administration was able to negotiate the cost of the lights under $600,000, said most of the $6 million was being covered by Enbridge, owners of the natural gas Atlantic Bridge pipeline project that runs near the property.

Besides the turf fields, which can be used for football, lacrosse, soccer, baseball and softball, the facility

includes a baseball field with a press box and bleachers, a golf putting green, basketball courts, handball courts, a pavilion, playground equipment, and restrooms on a 15-acre section of town-owned land.

Since the project is being done in phases, most of the other amenities are not yet completed. Orlowski said a sewer line was currently being installed for the bathrooms.

The baseball field is expected to be utilized by the Lakeland School District for varsity home baseball games this season while the fields at Lakeland High School are being shut down for improvements.

Orlowski said permits will be issued for groups that want to use the Granite Knolls fields and employees will be monitoring the site at least six days a week. Gilbert said funding for one new full-time and one additional part-time employee was approved in the 2019 parks budget.

Meanwhile, Legacy Field in Yorktown remains closed due to the installation of the pipeline and is not expected to be available for use until at least the fall. Legacy Field has been off limits since November 2017.

Trump Briarcliff Manor Golf Club Faces Criminal Probe
WHAT TO DO This Week
Cozy Up!
Inside Ardsley's "Double" Restaurant