A raucous confrontation between former President Donald Trump supporters and Westchester residents opposing Trump had both sides shouting accusations at each other for more than three hours last Thursday night near the National Golf Club in Briarcliff Manor where Trump was attending a fundraiser for New York Republicans in his honor.

The protest came on the heels of Wednesday night’s demonstration outside the Winged Foot Golf Club in Mamaroneck that was also hosting a fundraising gala for Trump.

At the Briarcliff Manor protest, about 20 Proud Boys joined roughly 50 ‘Chinese Americans for Trump,’ all directing pro-Trump slogans across the street to some 45 local residents, most of whom were members of Westchester Indivisible, an activist movement against Trump.

County and town police set up barricades in front of the pro-Trump contingent on one side of Dalmery Road, just outside the 16th hole on the golf club fairway. Earlier, police placed a video camera on a telephone pole at the end of the driveway of Deborah Pangle, who lives across the street from the golf club. The Proud Boys group is a male, far-right organization that promotes political violence and has been designated a hate group by the Southern Poverty Law Center.

Across the street, a Briarcliff Manor resident held a sign that read, “Lock Him Up.” “It’s a shame what’s happened in our country,” the man said. “We are so polarized. There seems no way to create a common ground.”

Police vehicles were stationed at the main gate and other areas that could access the golf course.

A woman who lives in Ossining said she feared President Joe Biden was too weak to stand up against China and that a stronger Chinese government would recall all Chinese immigrants. “This country is trending towards communism, and we can tell,” the woman said, adding that her parents still live in Beijing. “We demand that Trump come back.”

Katonah resident Lloyd Trufelman, holding a sign that read “Teed Off About Trump,” tried to have a conversation with a woman waving a Trump flag. “I wanted to see what they would say face to face so I said to her ‘Trump is not president, so what should we do?’ She stepped back and said, “I don’t know.’”

“Out of curiosity, I approached some of the Chinese protesters and asked one of the women why they were here,” Trufelman separately stated. “She told me they came up from New York City to show their support for Donald Trump. I asked her who brought her group to Westchester, but she wouldn’t say. Then, motioning to the group of men next to her, she said, ‘they brought the Proud Boys in to protect us.’ I asked from who and she said ‘Antifa’. I then asked one of the Proud Boys why he was here and he replied with a string of obscenities.”

From one side of the road there were shouts of “We love Trump!” and “Biden cheated!” From across the street, Indivisible members shouted, “Blood on his hands!”

Nancy Lee, who was born in China and immigrated to the United States more than 30 years ago, said she supported Trump. “He loves this country, and he puts America first. He built a wall to protect [legal] immigrants. We have to have law and order to protect us from illegal immigrants.”

Ossining resident Jeanne Claire Cotnoir, who teaches history at Iona College, was stunned by the January 6 insurrection at the U.S. Capitol. “To see our own people attack our government was heartbreaking,” she said. “I feel it’s our responsibility to protect our Democracy. Trump needs to be held responsible for the actions he took.”

The rhetoric heated up with both groups aggressively shouting sneers and rebukes, prompting police to quickly set up another barricade in the middle of the road.

Standing with Indivisible Westchester members was Kim Issarelli, holding up a framed American Flag with a picture of her deceased father. “My father died of COVID and he voted for Trump in 2016,” she explained. “Trump lacked a health care program and his policies couldn’t control the spread of COVID and that killed my dad.”

Issarelli said the Briarcliff Manor protest saddened her. “This protest taints our community,” she said. “Trump hurt a lot of people, he hurt me.”

On the other side of the road stood China-born Stephanie Liu, who believes Trump sacrificed much for the country. “We love him. He is here because he has to do fundraising and we all donate to the Republican Party all the time.”

Shannon Powell, co-founder of Indivisible Westchester, said it was clear that the New York Republican Party has refused to denounce the insurrection and discredit the claim that Biden won the 2020 presidential election, Powell said.

“The New York GOP has no shame. They fully embrace what Trump stands for. It’s a sad day for the United States,” she said.

The fact that full embrace exists is one of the few things the two sides agree on. The New York Republican State Committee highlighted the Trump fundraiser in a press release, saying the event raised more than $1 million from the event.

“This event was a record-breaking success,” NYGOP Chairman Nick Langworthy remarked in the press release. “…There is a huge sense of excitement and optimism for the future of the Republican Party in New York. President Trump recognizes this and we are so grateful for his loyalty and support in helping us secure the resources we need to win.”” 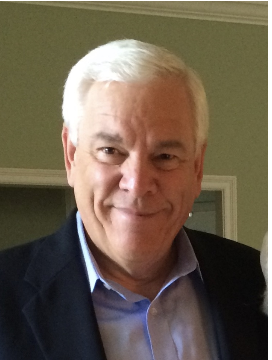