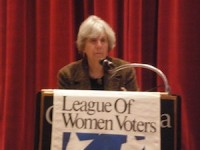 Supervisor Susan Carpenter and the New Castle Town Board voted to make itself lead agency of the Chappaqua Station project.

By a 3-0 vote, the board took the initiative on Conifer Realty’s proposal to build 36 affordable units in an apartment building on about one-third of an acre on Hunt’s Place. Council members Elise Kessler-Mottel and John Buckley were absent for the July 3 vote.

The remainder of the board delayed making an official referral to the architectural review board and the planning board for recommendations on the project until the meeting scheduled  for Tuesday night (July 10). Officials asked that a special joint meeting of those two board be held to further review the proposal.

One of the obstacles for moving ahead with the review this summer is that after the planning board’s July 17 meeting it is not scheduled to meet again before September, Hull said. However, officials are hopeful that the joint planning board ARB meeting can be scheduled for August.

At last week’s work session,  Hull said that impact on community character along with noise and odors since it is near the Metro-North train tracks and the Saw Mill Parkway are a couple of the chief concerns. Hull called for a visual impact assessment to be conducted.

“The location of the site brings a lot of concern,” Hull said.

The project has been met with rising opposition by some members of the community who have argued that the four-story, 36-unit apartment building is out of character with the surrounding area. Furthermore, lack of space at the site, the likelihood of increased traffic and noise have all been pegged by residents opposing the plan as potential problems that should scuttle the plans.

However, if the project is built it would provide the Town of New Castle and Westchester County additional affordable housing units that would go toward the 750 units that must be built by 2016 to satisfy the county’s settlement with the federal government.