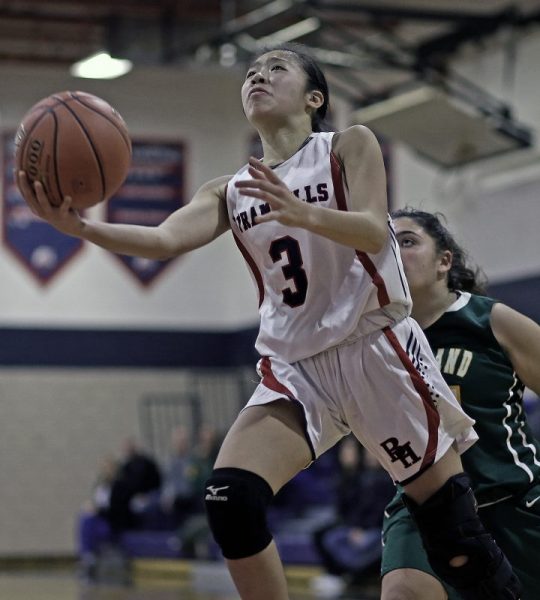 Just when it was needed, the Byram Hills girls’ basketball team caught fire on Thursday afternoon.

With a rapid array of 3-pointers, the Bobcats quickly overturned a nine-point third-quarter deficit and went on a big run that carried them to a 62-55 win over the visiting Lakeland Hornets. Point guard Jen Mui finished with 18 points and Beth Corelli added 13 as the Bobcats earned their first victory of the 2019-20 season and evened their record at 1-1.

“Lakeland played extremely well,” said Byram Hills coach Tara Ryan afterwards. “It was definitely a difficult first half. They went into a 1-3-1 and we had to make some adjustments going into the second half. So I’m very proud of the team. Everybody took accountability and we changed our defense up and we made a couple of switches to our offense.”

The first half featured three lead changes in the opening quarter and six more in the second, but Lakeland scored three straight baskets to close the half and take a 28-22 advantage at the break. An old-fashioned 3-point play 40 seconds into the third quarter stretched the Hornets’ lead to nine points before the Bobcats began their comeback with an assault from beyond the arc.

It started with a 3-point shot from Mui and a trio of others was soon to follow. After Lakeland’s Hannah Devane, who wound up with a game-high 25 points, drove the left baseline for a layup that gave the Hornets a 33-25 lead, Byram Hills responded with 14 consecutive points over the next four minutes, beginning with a Stefana Latella inside bucket.

Olivia Picca soon followed with a 3-pointer from left of the key, then Gabby Ripka, taking advantage of a Hornet turnover, connected on a trey from the left corner to tie the game. With 4:23 remaining in the third quarter, Mui drove to the basket for a scoop shot that gave Byram the lead. Corelli drained a 3-pointer from straightaway on a second-chance opportunity and the huge spurt concluded with a free throw by eighth-grader Grace Corelli.

“Yeah, our shots started falling and then also with that we started attacking the basket,” said Ryan, whose Bobcats had crushed Lakeland in the opening round of last season’s sectional playoffs back in February. “We were able to calm down and hit some open shots and keep driving the lane. It all starts with us on defense. When we get some defensive stops, it lets them push the ball. That’s kind of our game. And the girls did a great job in transition today.”

A short jumper by Sofia Portante late in the third quarter brought the reeling Hornets, who were outscored 18-3 over a six-minute span, to within 43-38 heading to the fourth. Lakeland then used a 7-0 run early in the final period to tie the score at 45 apiece. With just under three minutes remaining, the Hornets retook the lead, 51-50, on a right-corner 3-pointer from Tyler Hormazabal.

But Ryan’s Bobcats are a seasoned group, led by a core of backcourt players who have been together for quite a while, and they stepped up in the waning moments to secure a win. A 15-foot pop from Picca near the foul line with 2:35 on the clock gave the Bobcats the lead once again and they never lost it, closing the contest by outscoring Lakeland 12-4. Five of the points came from Mui at the free-throw line over the final 66 seconds.

“We want the ball in Jen’s hands at the end of the game,” said Ryan. “We have a great crew of phenomenal guards on this team and they keep pushing each other every single day. Jen, along with some others, have been on this team already for four years. They’ve been on the team since eighth grade, so they’re comfortable with being uncomfortable at the end. And they know it comes down to foul shots.”

A highlight of the new season awaits the Bobcats this coming Saturday morning when they face Walter Panas in a ‘Challenge Game’ of the 2019 Slam Dunk Tournament at the Westchester County Center, a place Ryan would love to take her team again when the sectionals arrive. But the playoffs are still a long way off and Ryan is content for the moment awaiting more of the same stiff challenges from opponents that Lakeland presented in the home opener.

“We’ve got a lot of things to keep working on, a lot of learning,” she said. “We have one of the toughest schedules coming up, I think, in the section. This is all preparation for playoffs. We’re gonna play the hardest teams we can. So the win-loss (record) might be a little different this year, but we’re sure gonna be ready for playoffs.”