The Summit Club at Armonk celebrated the full opening of all 18 holes of its redesigned golf course last Saturday, holding a grand opening and an inaugural tournament for its members and guests.

The 6,700-yard, par 71 course was renovated by noted golf course architect Rees Jones on the 156-acre site. It features a renovation of all of the holes, including three new holes on the back nine, and the rebuilding of all fairway and greenside bunkers along with the adjustment of some bunker locations to give players additional shot options.

Several greens complexes were added to provide new greenside chipping areas, and a number of landing zones were created on a few holes to improve their playability. The golf range and practice facilities were also upgraded.

Managing partner Jeffrey Mendell said all 18 holes were opened to golfers during the July 4 weekend. Starting in April until then, golfers had to play the front nine twice to complete a full round.

“It’s taken a long time to get to this point, but we’re all very pleased that we’re here today,” Mendell said during a brief ribbon-cutting ceremony near the first hole. “The golf course is in top shape. It is the first phase of the renovation of the golf course, so there is more to come for the next couple of years.”

The full opening of the course is the first major step at the property. There will be development of a new, modern clubhouse with amenities and a new pool facility, said co-managing partner Chris Schiavone. The property owners are also before the town, which is reviewing its application for 73 luxury condominiums on a portion of the site.

Schiavone said considering the amount of work that had to be done following a cold winter with plenty of snow and then by rain in spring, makes reopening of the course a special achievement.

“It’s always great when you can finally open 18 holes of golf,” Schiavone said. “It’s been four years dormant and there’s a lot of work that went into bringing it back, not just Rees Jones redesign work, but our great superintendent and his team (brought) things back to the level where I’m really amazed how nice it looks so quickly.”

He said the course plays fair, challenging enough for seasoned golfers but won’t be out of reach for less experienced players.

A key objective is to make the club a more casual, family-friendly facility that is more affordable than many private clubs in the region, Schiavone said. The current initiation fee is $25,000, although that is expected to double once the clubhouse and other amenities are built, he said.

“I think that’s going to make us unique in the market and that’s one of the things that makes it exciting,” Schiavone said.

Currently, there are between 30 and 40 members, according to Mendell. Once the project is built out, it is anticipated there will be about 300 members, he said. The owners of the 73 condominiums will automatically become members under the terms of ownership.

While there is still work to be done on the other phases of the project, last Saturday was about golf. Whether players had played the course previously or not, Mendell said golfers will like what they see.

Last year, the partners and their team changed the name of the project to The Summit Club from Brynwood Golf & Country Club as part of a rebranding strategy. The property has been used as a golf course since the 1960s when it operated as the Canyon Club until it was sold a little more than a decade ago.

For more information about The Summit Club at Armonk, call 914-273-9300 or visit www.thesummitclub.net. 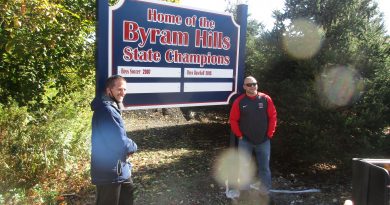 Farber, Schleimer to Run for Re-election in Mount Kisco