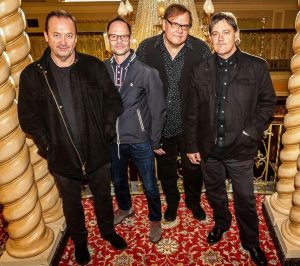 The lineup for The Smithereens that fans will see when they came to the Paramount Hudson Valley for the Feb. 22 show. Pictured, from left, guitarist Jim Babjak, singer Robin Wilson, drummer Dennis Diken and bassist Mike Mesaros.

Just over two years ago, veteran rock band The Smithereens wasted no time in getting back on stage after they were dealt a shocking blow.

Despite The Smithereens having been together since 1980, with the band’s three other founding members – guitarist Jim Babjak, bassist Mike Mesaros and drummer Dennis Diken – old high school classmates, it was far from a certainty whether they would continue.

Diken recalled less than a month after DiNizio passed, they had a previously scheduled show at the Count Basie Theater in Red Bank, N.J. Bruce Springsteen’s guitarist Steven Van Zandt urged them to keep the date and find a guest vocalist for the evening. Guitarist Marshall Crenshaw, who performed on The Smithereens’ first album, came to help them out that night.

Now, Crenshaw, along with Gin Blossoms lead singer Robin Wilson, both of whom have been longtime fans of the band, alternate as the group’s main vocalist depending on their schedules.

“They’re both really wonderful to work with and they bring a lot to our shows,” Diken said. “It’s different but it’s still essential Smithereens and the best is, the three of us, Jim, Mike and myself, grew up together, learned how to play together and really the essence of the band is very much intact.”

On Saturday, Feb. 22, The Smithereens return to Westchester for a concert at the Paramount Hudson Valley in Peekskill, a venue that Diken loved when he filled in as the drummer for The Kinks during a concert. Wilson is scheduled to be the lead singer that night.

Diken said their fans will hear the band’s bands favorites, including “Blood and Roses,” “A Girl Like You,” “Only a Memory” and “Behind the Wall of Sleep.”

“People want to see us so we want to give them a good show for their money and we want to have fun, too,” he said.

Now, 2020 promises to be an important year for The Smithereens. First, they’ll be celebrating their 40th anniversary next month. Then, later in the year, Diken said their fans can anticipate the group’s first album in nine years.

Having gone nearly a decade without recording, there is a large catalogue of material that they’ve written, which could probably fill several albums, Diken said. He said that fans won’t be disappointed because it “sounds like classic Smithereens.”

“Again, I’ve got to say (it’s) the sound of The Smithereens in its rawest, stripped down form, similar to when just Jimmy and I played together in September 1971 when we were both in high school,” Diken said.

With the volume of unrecorded material the band has in its possession, don’t be surprised if there are more albums to follow, he said.

For Diken, it’s been a long way from their days at Carteret High School more than four decades ago, but playing, writing and performing is really all that he’s wanted to do – and the group’s fans make that possible.

“We do appreciate anybody who takes the time to see us,” Diken said. “I want to make the point; we really appreciate our fans’ loyalty and support. If they keep coming out, we’ll keep coming out and making music. It seems like our music really has meaning to them.”

Tickets for The Smithereens for the Feb. 22 show are $29 to $59 each and can be purchased at www.paramounthudsonvalley.com. Showtime is 8 p.m. The Paramount is located at 1008 Brown St. in Peekskill.