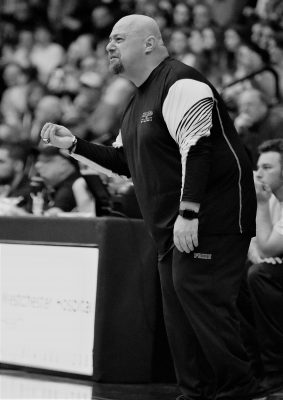 I’ve just spent the last 30 years juggling the local sports circuit, working with and against BOE’s/administrators (holding certain folks accountable when need be), while developing relationships with coaches and covering some of the finest student athletes in the nation. It’s been both an honor and privilege to do so, starting with 17 years at the now-defunct North County News and transitioning to the Northern Westchester and Putnam Examiners.

I once stamped my former hometown of Putnam Valley as “A Town Without Clue” for its 1992 budget cuts that slashed sports in more than half, and while that headline was regrettable, it had to be done: Point is, we’ve called it like it is; no matter who it helped or hurt, so long as the welfare of student athletes — all students for that matter — was atop the agenda.

It all started back in November of 1989 with a kid named Anthony Alberti, a two-time NYS wrestling champion out of Hen Hud who first impressed me when I initially joined the local sports beat, and it circled all the way back to Lakeland field hockey Coach Sharon Sarsen and her 11 consecutive Section 1 titles and 10 state titles in the last 11 years (14 overall), including another in November of 2019. When you work as hard as ‘Sars’ does, you can only wish more of the same for her in 2020. Sarsen may be the only person who was coaching in this region (N.West/Putnam) when I started and is still killing it now, so Happy New Year, girl! And Happy New Year to all!

In between Alberti — one of Hen Hud’s premier athletes — and Sarsen, there have been so many mind-blowing athletes, too many, in fact, to recall, but that’s what these end-of-year/decade-pieces are about. (Remember, my brain cells aren’t what they once were, so folks may inadvertently slipped through the cracks.)

Some schools have that clear-cut #STUD athlete that just about everyone who’s been with me the last 30 years can agree with; the Ric Beardsleys (Lakeland), the Elton Brands (Peekskill), the Donnie McGraths (Kennedy) and the Ryan Mahoneys (Carmel). These were some of the finest athletes in NYS history, let alone Northern Westchester/Putnam.

Beardsley, a two-time Hornets lax All-American and football stud, who talked as much smack (but backed it up) as any athlete I’ve ever covered, went on to become a four-time lacrosse All-American at Syracuse and a two-time DI national champion, and is still giving back to the game as a high school coach at the Christian Brothers Academy (Syracuse). I’d put him up against any pole from our area over the last 30 years. He was that freakin’ dirty.

Brand, the greatest basketball player in Red Devil history (NYS Mr. Basketball in 1997) and now the GM for the Philadelphia 76ers, went on to become an NBA All-Star after being the first Duke freshman in school history to leave the Blue Devils’ nest after a bally-hooed year that led to him being the Chicago Bulls’ No.1 overall pick in the NBA draft (he was also the most humble kid you’d ever meet despite his greatness). We’ve not seen anyone quite like the ‘Big E’, nor may we ever.

McGrath (or D-Mac) led Kennedy to the NYSPHSAA basketball finals in 2002, went on to have a long and prosperous career in Europe (which is still ongoing) and was one of the smoothest dudes I had the pleasure of covering. He’s still killing it, by the way. 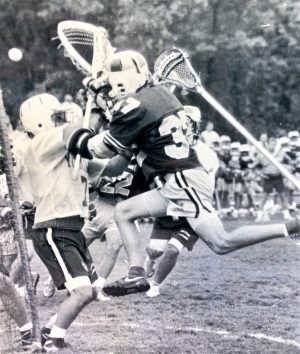 Golden era of Section 1 lax when Lakeland’s Anthony DiMarzo went right at Yoktown’s Rocco D’Andraia in game of the decade.

Mahoney, now the baseball coach at Iona Prep, was the best damn Ram ever: Dominant in baseball as a catcher, ran like an antelope on the grid, and could have dominated in hoops had he not decided to stand down and concentrate on baseball where he was drafted by the MLB Diamondbacks. My moles in Carmel suggest there is very little argument here, and I wish we could have seen more of him but the old North County News only covered Mahopac and Put Valley in those days, so we missed out on some incredible opportunities at Carmel, Haldane and the great run by Brewster in the NYS football tournament (more on that below).

Everywhere else within the region I’ve covered, it’s not quite as crystal clear; not that it was straightforward between those four schools, and one could argue that till the cows come home.

Mahopac might have been the toughest to pick, though Yorktown was every bit as mind-boggling. Let’s be clear: Mahopac’s Dave Fleming pre-dated my time on the beat by like one or two years, or the former MLB stud and basketball sniper would be the call. That said, I was doing a five-year penance on SUCO Island in Oneonta when the Georgia-bound Fleming was twirling gems on the diamond and crippling scoring records without the benefit of a three-point line, which brings me to Ryan McClay (lax, football, hoops), Brendan Hynes (lax, football, hoops) and Joe Mazzurco (among the finest wrestlers in NYS history). I pressed some pretty impressive minds within the Mahopac system and this is what they come back with, and the separation in terms of athleticism is razor thin between the trio (and there’s at least five others in the all-time discussion, including Adrienne ‘A-Train’ Blount, Ally Shields and Kim Harker). 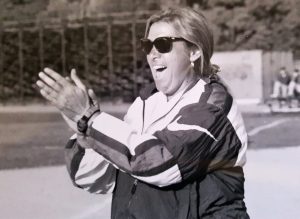 Since the wee ’90s Lakeland Field Hockey Coach Sharon Sarsen has built a dynasty while becoming the foremost field hockey coach in NYS.

Man, Yorktown is chock-full-of-choices, including its two most recent two-sport studs Brett Makar and Keith Boyer (lax All-Americans, football), plus throwbacks like Robbie Doerr (as great a coach now as he was a two-time high school and Hopkins collegiate All-American player in the wee 90’s), to as far back as when I first hopped aboard the scene and spotted two-time Cornhusker and four-time Syracuse All-American Roy Colsey, the fair-haired wonder boy. But the kid that really stole my heart is no longer with us: Pound for pound, Don Weese (5’8” 165 pounds) was probably the best three-sport athlete from this neck of the woods: All-NYS in football, All-Section lacrosse, All-Section skier. His epic, three-TD performance in the 1994 NYS football championship at the Carrier Dome was unlike anything I’ve ever seen in person, and he seemed to be the best player on every field or mountain he conquered #RIPbro.

Yorktown might have the top overall family, too: Few gene pools can match the excellence of the Fusco family when it comes to lacrosse. Four All-Americans under one roof, including dad (Frank) and three siblings (Rilea, Frankie Jr. & Austin). That’s just insane.

Yorktown might also have produced my favorite dad of all time, the late Tony D’Andraia #YorktownRoyalty #RIP. That cat had a silent command of situations and kept the whole place in check as he strolled the sidelines with mass respect for all. And I can’t get enough of Phil Mariano, either, not to mention his son, Slick Nick, who went from a lax diamond in the rough to pure All-American Cornhusker gem before taking over at places like UMass, Syracuse, MLL and more.

Matt Pires of Somers quickly comes to mind because of his three-sport (football, hoops, baseball) prowess, but the Tuskers have been loaded with a litany of female and male soccer stars, not to mention the likes of Rob Smith (football, lax), Tom Wereny (soccer, lax) and Jordan Rabidou (football, lax), who pretty much put Somers sports back on the map after a slight skid before the turn of the century. Pound for pound, I loved Loyola-bound Rabidou (#JRab), and the Georgetown-bound Smith was a complete monster. Yeah, Somers has had some studs.

Panas might have the best set of twins; Tom and Tracy Cottrell, and they could easily be the best athletes hailing from Putnam Valley (though the Ammann bros, Steve and Mike, both D-I lax standouts, were special, too), but I’m not sure any Panther can hold a candle to Panas’ Sean Lindsay, who, back in 2000, was a two-time lax All-American and All-Section signal caller before an All-American lax career at Syracuse. That said, Yvette Burcescu is right there with Lindsay, having secured first team All-State honors as a freshman, sophomore and junior before being named the NYS Gatorade Volleyball Player of the Year during her 2016 NYS championship season. The Tulane-bound swatter hit with more ferocity than any volley baller I’ve seen and her five-year varsity career speaks for itself. And that Shawn Tarkington, drafted by the MLB Minnesota Twins out of Seton Hall, was a two-sport sensation, leading the Panthers to the 1997 NYSPHSAA hoops finals. Look up man among boys, see picture of ‘Tark’.

Brewster had some fierce competitors before and after we started covering the Bears. the Jack Guidas, Zack Badaluccos, Will Santis, Perry Salvios and Harry Ericksons. But Dave Snyder was probably the most dynamic athlete in Bears history. The kid was a four-year starter at QB (1996-99) and led Brewster to three Section 1 championships, the only sectional football championships in school history (1996-97-99). He also has three Region 1 championships and two NYS finals in the Carrier Dome (’97 Class B; ’99 Class A) on his resume, which shows a two-time All-NYS player, and football wasn’t even his main sport. Snyder was a freak on the lax field, too, a five- year varsity starter, three-time All-Section player and two time All-American before accepting a full lacrosse scholarship to Syracuse. He was also a three-year varsity starter in hoops, so you’d have very little argument from anyone in Brewster if you called Snyder Brewster’s all-time great.

I can go on and on with the Darnel Shillingfords and Zach Colemans (Putnam Valley), the Sam Giachintas and Brittany Shields’ (Haldane), the Kurt Thomas’ (Hen Hud), the Obi Toppins, Saniya Chongs, Aubrey Griffins and Scott Rowes (Ossining), and so many others, including the many terrific coaches — too many to mention — I’ve encountered over three decades.

But time and space are cutting this trip down memory lane short. Find me on Twitter @Directrays to let me know where I went wrong or who I left out, because, like I said earlier, ‘all-time’ lists and reflections like this are subjective and always open for discussion…

P.S. It wouldn’t be right for me to simply dismiss the regular contributions we get in this sports section from volunteers like Bob Castner (of Yorktown fame), Bill Kennedy (‘The Man’ in Mahopac) and the indelible Rick Kuperberg, who goes above and beyond the call of duty. I’m just one guy, overseeing a fairly young family of four, so I can’t get out to as many games as I used to with my own kids’ activities taking place, but these three guys provide photo coverage for scores of local athletes from nothing more than the good in their heart. I know the amount of time it takes to attend games, then choose and edit photos before hitting send. I know I speak for the countless athletes and families this trio touches on a weekly basis when I say Happy New Year, my friends, you deserve that and so much more.

Without their weekly contributions, this Northern Westchester/Putnam Examiner sports section is half the actual beast it is.