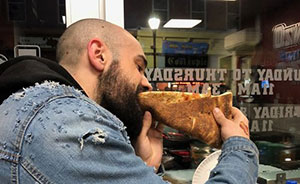 It is often said when life gives you lemons, make lemonade. In Matthew Mancuso’s case, he could easily whip up a lemon curd tart.

A 2008 Walter Panas High School graduate and a pastry major at the Culinary Institute of America (CIA), Mancuso, 31, moved back to Philipstown from Brooklyn when the COVID-19 pandemic struck. While many people have struggled to find employment, Mancuso has many irons in the fire with his exquisite culinary skills in high demand.

“Food was always a big part of my life. I know what good food tastes like,” the newly-engaged Mancuso said. “I’m one of those stories where I benefitted from the pandemic. I ended up losing a business but came out of it with two more.”

Having been in and around kitchens since he was 15, Mancuso worked as a chef de partie in a new bakery after graduating from CIA in 2010. He then moved on to becoming a pastry chef at Michelin-rated eateries such as Le Bernardin, Corton, TKRG and Blue Hill at Stone Barns, sometimes putting in 80-hour weeks. In 2014, he started a food blog called The Art of Eating.

Mancuso suffered severe injuries to both knees in 2017 and 2018 that put him on the shelf for 14 months. While recuperating, Mancuso started a social media management company and took an online course on food photography, which led to a paid internship as a food stylist with famous photographer Brent Herrig.

“He took a chance on me. It was very eye-opening to see another part of the industry I didn’t know existed,” Mancuso said.

After the pandemic ended that 14-month adventure, Mancuso started a YouTube channel on recipes. That led to viewers asking him to do cooking classes and requests for him to be a private chef in homes. Mancuso cooked at barbecues and small weddings and for couples.

“It grew from word of mouth. It just kind of blew up,” he said, noting he was booked every weekend for nearly a year.

Mancuso branched out to offer dinner boxes for special occasions and pop-up dinners.

“I wasn’t planning on going back to cooking,” he said.

Last year, Mancuso teamed up with Connor McGinn, one of the local entrepreneurs selling artisanal goods at a warehouse called Makers Central in Tarrytown, to offer high quality four-course meals on site once a month on what is called the Sunday Supper Club. Last summer, the dinners sold out in less than an hour.

“It’s a really neat space,” said Mancuso, who is hoping the club will resume in the spring.

In the meantime, Mancuso is doing what he loves.

“I like to call myself a gentleman, some would say a wise-ass and to others I’m well-seasoned, but I’ll leave it to you to taste,” he said. “It’s been a busy road so far.”

Forging community in Westchester with thoughtful local journalism — one deep dive at a time.
• A "Disposable" Income
• Our Best Bets for This Weekend (and Beyond): What to Do and Where to Go
• Art Attack
• Too Cool for School (Applications)
• Mac & Cheese? Yes, Please!