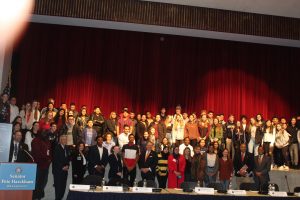 “The adults in charge don’t have all the answers,” Harckham said. “We want to hear your perspectives. Some scary things have been going on and we need to know why. This is not something that will end tomorrow.”

Harckham noted hate crimes have increased nationwide in the last three years, resulting in more than 400 deaths and 1,400 injuries. Disturbing acts of vandalism have taken place in recent months in Cortlandt and Yorktown.

More than 150 students attended the event, along with a number of educators and administrators.

The first question Harckham posed to the panel of students was, “How has hate and intolerance personally affected you and your community?” All of the responses from the participants touched upon experiences that were marked by insults and insensitivity.

“I feel I get hated on every day just walking down the street as a black man,” Dabbs said.

“Hate is learned. It’s not something you are born with,” McQueen said. “We should start embracing each other. We should be proud of who we are, no matter what and to do that you need to have an open mind.”

The panelists all agreed social media and the behavior of President Trump had empowered more people to spew hatred remarks towards others.

“When things are not filtered that’s part of the danger. When anything can be said and published,” Gale-Donnelly said. “We’re all good people and we all value kindness. Kindness is the most important human value.”

The students also maintained elected officials such as Harckham could make a difference in making the world a better place.

“Use the privilege you have to bring up the people in your society that are struggling,” North said. “There’s a lack of opportunities in a lot of communities. You need to use white privilege to push these conversations.”

“Listen to each other and show you have an open mind,” McQueen added.

Check out these features on Examiner+:
Millennials are Broke
Restaurant Spotlight: A Real Name-Changer
Our Vanishing Corner Drugstores
Valhalla Singer Teams with Ariana Grande on The Voice