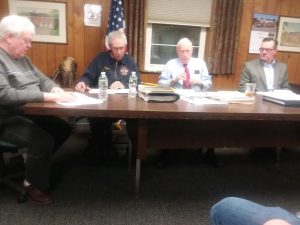 The New Castle Fire District Board of Commissioners could announce by next month details of a major expansion referendum for the King Street firehouse.

New Castle Fire District No. 1 residents may learn by next month when a King Street firehouse expansion referendum will be scheduled.

Board of Commissioners Chairman Erik Nicolaysen said last week while fire district officials have a good idea the amount that voters will be asked to approve, they must still meet with the Town of Mount Pleasant to see how much their taxpayers are prepared to contribute. Once that is known, all of the financial information can be released, he said.

The district provides about 600 parcels in Mount Pleasant with fire service, Nicolaysen said.

“We know the approximate amount that we have to bond but the question is we can’t figure out what (the taxpayers’) cost would be until we have some kind of idea what we’re going to receive from them,” he said.

Several public information meetings that will review the cost and the scope of the project will be scheduled for residents before the vote. Nicolaysen said he hopes that the referendum can be scheduled for a Tuesday sometime this spring.

During the Board of Commissioners December meeting, several details of the tentative plan were publicly revealed. The new wing would contain a drive-through facility that would house the larger trucks and additional equipment required to be carried by today’s fire departments. Trucks would enter the facility through Memorial Drive and exit onto King Street, eliminating the need for trucks to back in when returning from a call.

The new space would also include room to accommodate the rescue truck, the ladder truck and a pumper and to include a special washer to decontaminate equipment. Equipment and an antique fire truck would be moved from the old Senter Street firehouse, to be housed in the current structure.

Nicolaysen said New Castle town officials have offered the fire district use of a town facility to hold the vote. The district was harshly criticized for the $12.6 million expansion referendum in October 2016 when many residents were unable to vote because of long lines and lack of parking at the King Street firehouse.

Last week, the board approved two resolutions related to work on the site of the old animal hospital at 495 King St. that was acquired by the district in anticipation of a future expansion. Voters approved a February 2017 referendum for $2.6 million to buy the land.

The first resolution approved spending $62,000 for JMC Site Development Consultants related to remediation of soil at the site.

A second resolution appropriated $14,000 for legal fees associated with completing Planning Board documents related to the proposed expansion