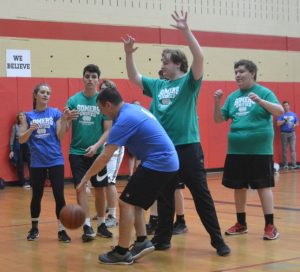 To the ordinary observer, they are high school basketball players rushing down the court, dribbling the ball, passing it off, shooting to score. You barely notice the players who step a little unevenly or hesitate slightly when throwing the ball.

These particular players are on the Special Olympics team at Somers High School and although they have a learning or physical disability, their reflexes are quick and their energy keen. On Wednesday, they played competently at their end of season tournament at Somers High School.

“This is what’s known as a unified tournament,” said Katy Faivre, Special Olympics Coordinator and Coach for Somers High School and Middle School. “We are combining kids from the high school basketball team with the special athletes. There are six teams, eight kids on a team and two kids on each team are from the special Olympics team.”

Including students with intellectual and physical disabilities in a regular classroom is not a new idea. Faivre believed that integrating general high school team members with Special Olympic youngsters would improve their game. The Somers High School Special Olympics team is a small part of the New York State Special Olympics.

“Most Special Olympics are adult leagues,” Faivre explained. “But ours is a Pioneer League and is the only school-based league in New York State. It was started by parents about 15 years ago and today the league has 18 teams from schools in Westchester and Putnam Counties. We play competitively and the program is completely supported by the district.”

The tournament was at the Somers High School gym, which was divided into two playing courts with two Special Olympic basketball games happening simultaneously. Debra Ann Carfagno watched her 17-year old son Ralph barrel down the court. Ralph has been in the Special Olympic program for years. Carfagno marveled at how the Special Olympic kids were so interactive and competitive.

“Ms. Faivre is a great teacher and has made each and every one of these kids feel they are part of the team,” she said. “They want to be involved and have a true sense of individuality and self-esteem.”

Faivre said that the Special Olympic unified teams in Somers include bowling indoor soccer, floor hockey and basketball, all with weekly practice and weekly games. “I started working with the same group of kids about five years ago and know them quite well,” said Faivre.

The teams have attracted attracted many volunteers who are high schoolers and coaches. “The volunteers have made the Special Olympics team a competitive, inspiring these kids to play at or above their level, outside their comfort zone. These games push them a little bit to play to the best of their ability,” she said.

As the tournament reached the halfway mark, Carfagno acknowledged Faivre’s commitment. “Ms. Faivre has made it work. She listens to then, communicates with each one of them. She instills the belief that they are part of something and they are respected,” Carfagno said.