A Somers High School English teacher who was at the center of a debate in the district after assigning a lesson with racial overtones is returning to the classroom Monday.

Allison Ferrier, a teacher in the district for 25 years who upset a throng of parents and students after assigning an essay asking students to examine their “white fragility,” will be back in the high school Nov. 14 following a short hiatus, according to Superintendent of Schools Dr. Raymond Blanch.

Blanch, who on Nov. 1 penned a letter panning the lesson that centered around excerpts from the book “Me and White Supremacy” by Layla Saad, informed parents Thursday a “fact-finding” process had been completed into the controversial matter.

“As in schools across the country, we in Somers are also grappling with how to have conversations around sensitive and/or controversial topics. Listening to each other and appreciating different experiences and perspectives is the foundation of how we embrace diversity, equity, and inclusion in our school community,” Blanch stated in his correspondence.

“As our teachers engage in this work, it is our collective responsibility to choose resources and structure lessons that encourage all students to actively participate within a safe learning environment. We understand that we have more work to do to support our faculty with training for when controversial topics arise in the classroom,” he continued.

Blanch explained the English Department was not specifically prohibited from using Saad’s book, published in 2020, which “encourages people who hold white privilege to examine their (often unconscious) racist thoughts and behaviors,” according to a description on Amazon, after it had been removed from the summer reading list in June 2021.

“Rather, a decision was made collectively among members of the English Department, the library media specialist, and the administration to develop a process to select summer reading texts going forward,” he stated. “As of today, we have clarified that Layla Saad’s book, “Me and White Supremacy: Combat Racism, Change the World, and Become a Good Ancestor” will not be used as part of the English 10 curriculum.”

“We will be welcoming Mrs. Ferrier back to the classroom on Monday, November 14. As we have heard from current and former students/families, Mrs. Ferrier has had a positive impact on countless students in her 25 years with the Somers Central School District. She looks forward to her return to the classroom, as do we, and we will be partnering with her to ensure a smooth transition,” Blanch stated. “Though the past few weeks have been difficult, we know that we will all learn and grow from this experience.”

Although the district had not previously revealed Ferrier was disciplined in any way, an online petition signed by more than 2,800 people supporting the English teacher stated she had been removed from the classroom.

During a raucous Board of Education meeting last week, several parents questioned Blanch’s leadership in handling the situation, with some calling for him to resign.

Yorktown Unites to Raise Awareness for Relay for Life 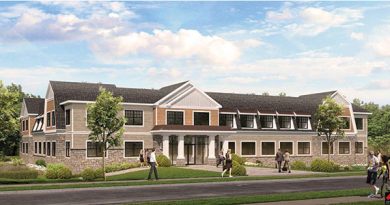 Late Yorktown Veteran to be Inducted into Hall of Fame