Before Sunday, the history of Somers baseball could be summed up in two distinct eras; the sectional three-peat dynasty between 2007-09 under former Coach Joe Wootten and everything else. Then, along came Coach Anthony Nappi’s 2022 squad, which was left for dead midway through the spring before securing the No.12 seed in the Section 1 Class A tournament.

That bracket was busted up early on, when the Tuskers upset No.4 Byram Hills and No.9 Nanuet sent No.1 Panas packing. Somers then plowed through Nanuet in the first game of the “Double-Elimination” semis before defeating No.2 host Rye, 3-1, setting the Tuskers’ up for their first championship berth since 2009.

Rye was eventually eliminated by Nanuet, who was then knocked off by No.3 Eastchester, after the Eagles had lost to Rye. Hard to follow? Sure, but Somers stayed in its lane throughout. That left Somers (15-10) as the only team without a loss, in a one-win situation against the Eagles (18-5-1) last Sunday at SUNY Purchase. The Tuskers shook off Saturday’s postponement due to heavy downpours, lost a 4-1 decision in Game 1 of the double elimination setting, and eventually recovered behind a complete game pitching performance from junior MVP Stefan Swee, who delivered to a 4-2 complete-game victory in Game 2 of the Section 1 Class A championship round.

The Tuskers will now face Section 9 champ Cornwall at 4 p.m. Thursday at Catrine Field in Saugerties in the opening round of the NYSPHSAA Class A Tournament.

“Swee’s an absolute stud,” Somers Manager Anthony Nappi said of his ace, who whiffed a season-high 12 batters, allowed just four hits, and sent Eastchester’s No.2 and 3 hitters packing to strand the tying runs in the seventh. “Stefan was a DUDE today. Eastchester’s lineup has been a terror all year. The first two innings he battled, couldn’t command pitches but in the third inning he found his breaking ball and struck out the side. We knew in the dugout we were gonna be just fine after that. He really stepped up for us. He doesn’t get enough credit and flies under the radar a little bit. The night before on the broadcast they said the second game for us would be a bullpen game. He heard that and used it as fuel to remind everyone who he has been all year.”

Swee’s Game 2 effort foiled the complete game by Eastchester senior Chris Howard, who was almost unhittable in Game 1, keeping the Tuskers off stride throughout. The Tuskers’ approach at the plate improved dramatically in Game 2.

After a rough Game 1, though, Somers senior SS Matt Kapica went 3 for 3 with a double and triple in Game 2, driving in the go-ahead run in the third, before scoring a key run in a two-run fifth frame. Somers, which was left for dead after a preposterous 3-6 start, had some championship pedigree in guys like Swee, Kapica and Ravi Dass, who helped get Somers to the NYS football finals last fall.

“To be a section champ once again means a lot to me,” said Kapica, a key member of the 2021 NYS Class A football runners-up. “We have worked so hard, and to finally be rewarded like this is a dream come true. We had a goal at the beginning of the season to win the league and section title. We knew it would take each and every player to make it happen. Through the ups and downs, we were able to rise against the odds and come out on top. I couldn’t be more proud of this team.”

When Swee did dabble with some trouble, his defense picked him up, including the sure-handed Kapica.

“Matt has been one of our most important players all year long,” Coach Nappi said. “The kid’s a winner. He willed us to that yesterday, offensively he got us going in that inning with the triple, but he also made a play with runners on first and second that went unnoticed to probably a lot of people. The slow roller was trouble and he went after it hard and made a great throw on the run. There was no way he would allow us to lose that game.”

Somers IF Tommy Tan and DH Eddie Baranowski each drove home a run to eradicate a 1-0 first-inning deficit.

The surging Tuskers are now 12-4 in their last 16 were poised to put another chip in the Roman Empire as outgoing A.D. Roman Catalino is set to retire upon the conclusion of the school year. Kapica went 4 for 7 in the two championship games while C Evan Carway, Swee, 1B John Roubilick and Baranowski each had two hits.

“I’ll say it again: We were left for dead after a 3-6 start but this team took that adversity and never quit on themselves,” Coach Nappi said. “That was the message in between games. I told them that this whole day would be difficult but we’re in familiar territory. When this team was 3-6 backs against the wall, we found a way to play our best. We were built to withstand a tough loss.”

Somers advanced to the title tilt after knocking off host Rye, 3-1 at Disbrow Park behind a sterling effort from P George Creighton, who went the distance to secure the win. Creighton whiffed eight Garnets and pitched in and out of trouble, leaving the bases loaded in the sixth before stranding the tying and go-ahead run in the bottom of the seventh. Carway had a two-run double and Matt Kapica stroked an RBI single during the pivotal three-run frame off Rye’s Derek Woods, who went 3 for 3, including a solo homer in the sixth. In typical fashion, Dass singled, stole a base and scored a run. 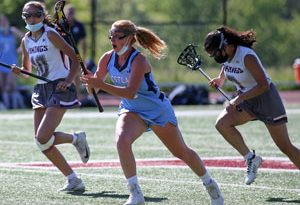 Wildcats Earn First Victory With a Rout of Red Hook