The story, which is written from the perspective of multiple characters, primarily revolves around a lackadaisical teenager Jack Colson who finds a mystical artifact. The artifact, an ice gem that has a living consciousness inside of it known as Ava the Ice Queen, gains powers and latches onto Colson.

Colson needs to learn how to utilize his newfound powers to stop the organization S.O.A.S., led by Austen Wolfe, who is trying to achieve an urban legend called “The Power of Four.” 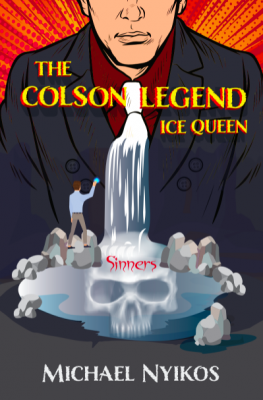 Throughout the story, Jack must not only learn how to use his special powers but also understand his symbiotic relationship with Ava — all while Wolfe is in high pursuit and ex-S.O.A.S. member and criminal, Liam Scarr, attempts to break the bond between Colson and Ava.

The Colson Legend: Ice Queen was released in late August, but Nyikos began the process 16 months ago in April 2020.

“During COVID, I was watching a lot more movies at the time, and I wanted to see if I was able to write a movie [of my own],” Nyikos said, noting that his original idea for The Colson Legend: Ice Queen was built for a screenplay.

“I decided to make it into a book instead so it could get dispersed to more people,” Nyikos said. “Screenplays are harder to get people to read since it’s supposed to be on the screen.”

Nyikos didn’t have a specific inspiration for his book, but rather he just started writing The Colson Legend: Ice Queen and built the ideas as he went along.

Nyikos worked with an independent publishing house, Rowland Publishing, which is based out of Tallahassee, and collaborated with fellow Somers Senior High School graduate and illustrator Lainey Rothschild for the book’s cover art.

Nyikos said the most difficult part of the self-publishing process was making revisions after his first draft was completed.

“Going back and making changes to make the book as good as it could be was definitely the hardest part because it took a while and a lot of thought,” Nyikos said.

But when the book was published, Nyikos said, it was all worth it.

Right now, The Colson Legend: Ice Queen is available for purchase on Amazon, but Nyikos is in the process of getting it into physical big-box bookstores like Barnes and Noble, as well as local, smaller bookstores in the Somers area. He hopes that it will be available in physical stores later this fall.

HV Chamber’s New Initiative a Mediapolis in the Making