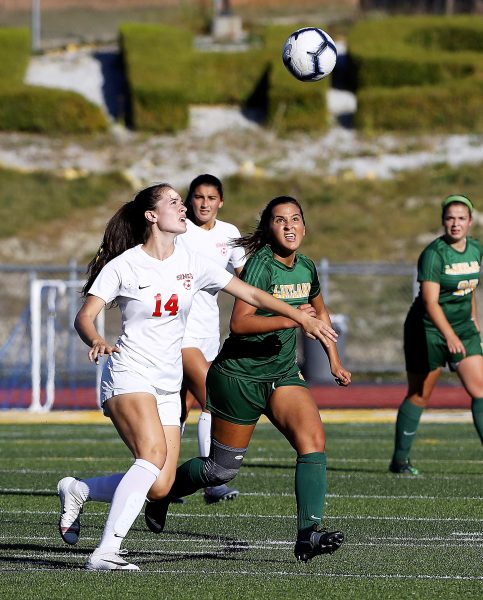 Somers’ Kayleigh Kenny and Lakeland’s Francesca Gerbasi get after 50-50 ball in Tuskers’ 2-1 OT win against the Hornets last week.

YORKTOWN striker Tim O’Callaghan, often the best athlete on the pitch, is starting to really feel his oats of late. The senior captain had a monster week for the surging Huskers (4-2), who have won four in a row, including a 5-4 nail-biter over an improved PANAS club, and BREWSTER, 7-2. O’Connor was doing work in both wins, putting up seven goals, including four against Panas (3-3) and the game-winner. But the Panthers were pesky and would not go quietly. Kyle Arraiano has four goals and two assists to lead the Panthers this season.

“Yeah we expected Panas to be a game to get the bench in a little bit, but they were definitely better than we expected,” said O’Callaghan, who had nine goals and four assists through Thursday. “They had a speedy striker that we had trouble with and he countered us real well. They came out of the half very strong and we were caught a little off guard. I think they deserve a little more respect than we gave them though.

“I think it took me a couple games and a couple position rotations to figure out what spot could put me in the best position to score,” he added. “My boys are figuring out different ways to get me the ball in good spots and I’m definitely on a hot streak right now I hope I can keep it going moving forward.”

O’Callaghan added three goals and two assists in the rout of Brewster. O’Connor tickled twine twice while James Calidonna and Ciaran Donohue each put up a goal. G Scott Weitman kept the Bears off the board for 60 minutes in his first varsity start. Brewster scored on a header by Jourdy Cerrato and Louis Romero breakaway. The Bears (2-4) have struggled out of the gate.

SOMERS senior M Andrew Lasher (8G, 3A through Thursday) bagged a hat trick in a 4-0 win over LAKELAND (3-2-1) last Tuesday. Tusker Ethan Cukaj scored once against the previously unbeaten Hornets. Bennett Leitner dished two assists for the state-ranked (No.20) Tuskers (7-0), who come in behind Byram Hills (No.16), Rye (No.10) and Pearl River (No.2). These are the early powers that be, but Rye looks like the club to beat (as of late Sept.), but Somers is well coached and skillful.

CARMEL’s Nicholas Fernandes scored a pair of goals in a 4-1 win over Suffern. Kid can play some soccer, but the Rams (4-1-1) are lacking punch behind him. Still, Carmel is off to its best start in many years.

In BREWSTER’s 2-1 win over Lakeland, Bryan Jaramillo gave the Hornets a lead in the closing minutes of the first half, off an assist from Nick DeSantis. However, Brewster’s Luis Romero found Kevin Sugamente to knot the score before the half and Dan Giron hit the game-winning marker in the 55th minute from Marco Gulla. It wasn’t a great week for either the Hornets or the Bears, who seem a notch below the big dogs in Class A.

CLASS A OSSINING is ranked No.9 in NYS and looks like a primary contender against top-ranked Mamaroneck. In what looks like a rare down year among the perennial Dutchess County powers, might the Pride be poised to snag a title? Ossining’s Nolan Lenaghan (12G, 2) and Eric Monges (1G, 7A) have created a formidable 1-2 punch.

When the MAHOPAC girls’ soccer team lost Colgate-bound senior Carly Steinberg, a pre-season All-American, to a season-ending knee injury, and the Indians transitioned from former 11-year Coach Ross Fumusa to current Coach Casey Carroll, there could have been a period for lament. Instead, the Indians, who went 12-6 last season and have been to two Class AA Final 4’s the last three years, took the next-girl-up approach and continued on their merry way, romping their way to a 5-1 start to the 2019 campaign despite a 4-1 loss over visiting perennial Class AA powerhouse North Rockland, ranked No.7 in the state. The Indians (5-1) were short a couple of key players that day and have put the loss behind them.

In a 2-1 win over Clarkstown North, the Indians saw Mia ‘Monsta’ Klammer and Jenna Daly tickle twine off assists from UConn-bound Grace DeVincenzo and Alyssa Chiulli.

In an impressive 4-1 season-opening win over Mamaroneck, Klammer was at it again, flashing the skills that make her one of the section’s premier scoring threats. Sabrina Nogula and Jenna Daly each added a goal while assists went to Alexa Rispoli, DiVincenzo, Marissa McCarney and Piper Klammer, the freshmen with a ton of promise.

In a big 2-1 win over Rye Saturday, the Indians got goals by Mia Klammer and Grace DiVincenzo off assists by Alyssa Chiulli and Marissa McCarney. Gifted senior keeper Isabel Omboni made 11 saves. Junior Shannon Becker notched her first varsity goal in a 4-0 win over John Jay EF earlier in the week behind additional goals from Grace DiVincenzo (2G), and Mia Klammer, who also had two assists. DiVi and Monsta have been a lethal combo up top.

“Grace and I have played together for the last two years and this is our third year together, so we understand the way each other plays and know what runs to make and where to be on the field,” Mia Klammer said.

State-ranked (No.5) SOMERS flexed some serious muscle this week in a 2-1 overtime victory over host LAKELAND, which is also having a solid season. However, Tusker Megan Dineen scored the game-winning goal with two minutes left in the final OT stanza. Somers M Jessica Rodriguez also scored while Dahlia Pepe and Karlene Kurtz each notched an assist for the Tuskers. Nicole Haughney scored Lakeland goal off an assist from Nadia Parisi.

Somers has been incredibly steady the last decade and there’s little reason to believe Coach Paul Saia’s Tuskers (5-1-1) won’t be in it to win it this fall, though Magnus and several others across the river are legit challengers.

HEN HUD’s Kira Varada scored four goals in a 4-0 win over Beacon win. Whether its soccer or lax, this kid has a nose for the goal.