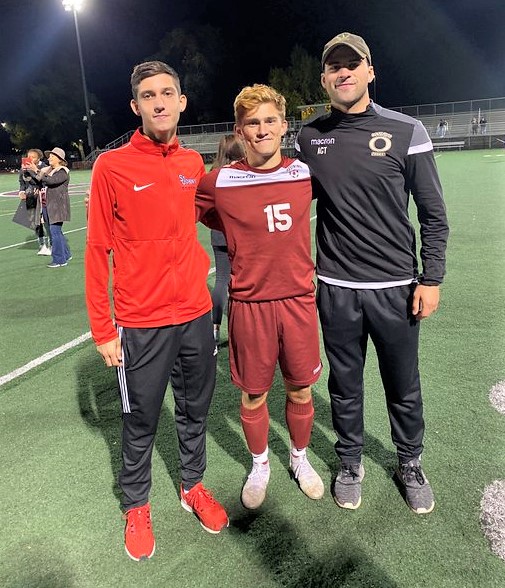 Lenaghan Setting Standard On, Off Field at Ossining

We have some really solid soccer being played across the Northern Westchester/Putnam County region this fall, and some record-setting performances coming out of OSSINING where this Nolan Lenaghan is rewriting the record books with single-season goals (24) and career tallies (50). Lenaghan, the most recent Con Ed Scholar Athlete award winner scored once in last week’s 2-2 with White Plains and notched the milestone 50th in a shocking 2-0 win over state-ranked (No.1) Mamaroneck. Lenaghan scored both the tying and overtime goals, snapping the career goal scoring mark of Alex “The King” Tejera and breaking the season single marks of both Tejera and Mateo Marra (22G).

Lenaghan currently leads Section 1 with 24 goals this season and, more importantly, sports an unweighted average of 100-plus in the classroom. The state-ranked (No.16) Pride (11-2-1) are having one of their best seasons and that is saying something given the level of soccer the last few years, and there are many at Ossining who say Lenaghan is the best to ever lace ‘em up there, the current No.2 seed in Class AA…

Staying in Class AA, CARMEL (7-5-1) is having one of its best seasons in the last decade and a 6-1 win over host MAHOPAC last Thursday only confirmed it. The Rams are currently holding the No.13 seed in the AA playoffs, and they got back on course after losing three in a row when Brian Baader-Blaser had a hat-trick for the Rams. Jaiah Gottor, Nick Fernandes and Jack Auteri also scored for Carmel. The Indians fell to 3-9-1 and hold the No.16 seed.

CLASS A SOMERS, the 2018 NYS runner-up, crossed into the top 20 in the state rankings last week and appears poised to defend its second Section 1 title in three years. Winners of nine in a row, Somers (12-1) swept John Jay in a 24-hour span, concluding in a 2-1 win Saturday, which produced the League II-B title and allowed the Tuskers to hold firm the current No.2 seed in the upcoming playoffs.

Skillful Ethan Cukaj scored both goals for the Tuskers off assists from Drew Lasher and Daniel Dipolito. Somers has outscored opponents 36-4 since the early season loss to Byram Hills.

LAKELAND spread the wealth around in a 5-0 win over Tuckahoe last Friday when Augie Karaqi, Sonny Karaqi, Bryan Jaramillo, Jason San Lucas and Jack Tuite each scored. Genti Gashi dished a pair of assists and G Nick Bassani (4 saves) posted a shutout for the Hornets (7-5-1), the current No.11 seed.

YORKTOWN made some adjustments from their first meeting with the Panthers and doled out a 5-1 setback to PANAS, which has struggled some of late. Husker striker Timmy O’Callaghan scored two goals and set up another. Yorktown coaches believe O’Callaghan is closing in on the program record with his 17 goals this season. Peter Tinaj had a pair of goals and playmaker George Popovic set up three scores for the Huskers (9-4), the current No.5/6 seed. Panas fell to 6-7 and cling to the No.15 seed.

HEN HUD (5-6-3) holds the No.16 after a scoreless tie with Beacon and a 4-0 loss to Scarsdale, but make no mistake the Sailors were scrappy in each game and continue to make ‘Angry Baby’ happy (inside joke).

State-ranked (No.16) SOMERS and LAKELAND really got after it last Thursday, the Tuskers (11-2-1) eking out a 2-1 win over the visiting Hornets (7-6-1) behind a goal and assist from Ella Kittredge. Ava Pagliaro tied the game at 1-all for the Hornets off an assist from Linda Daly.

Somers Coach Paul Saia was happy to get the win but expects more.

He was a tad happier after the Tuskers posted a 3-0 win over BREWSTER Friday to secure the League II-B title. Ella Kittredge, Karlene Kurtz and Angelina Hurtado each scored for the Tuskers while assists went to Dahlia Pepe and Kittredge.

HEN HUD’s Erin Clark was the hero of the day in the Sailors’ 2-1 overtime triumph of Beacon last Thursday, tickling twine twice, including the OT winner. Kira Varada added an assist for the Sailors.

Current No.17 YORKTOWN saw Julianna Vano get the hat trick in a 3-0 win over Brewster, improving to 5-6-2.

CLASS AA MAHOPAC climbed into the top 20 in NYS when Hailey Pereira, Mia Klammer and Christina Lopreato all scored for the Indians (10-3) in a 3-0 shutout of visiting Yorktown last Tuesday when Mahopac honored its seniors on senior night. Mahopac currently holds the No.3 seed behind No.1 North Rockland and No.2 Arlington, the three-time defending champs, directly in their current semifinal path; the same Admirals that handed the Indians a 3-0 setback Saturday. Arlington remains the team to beat until proven otherwise.