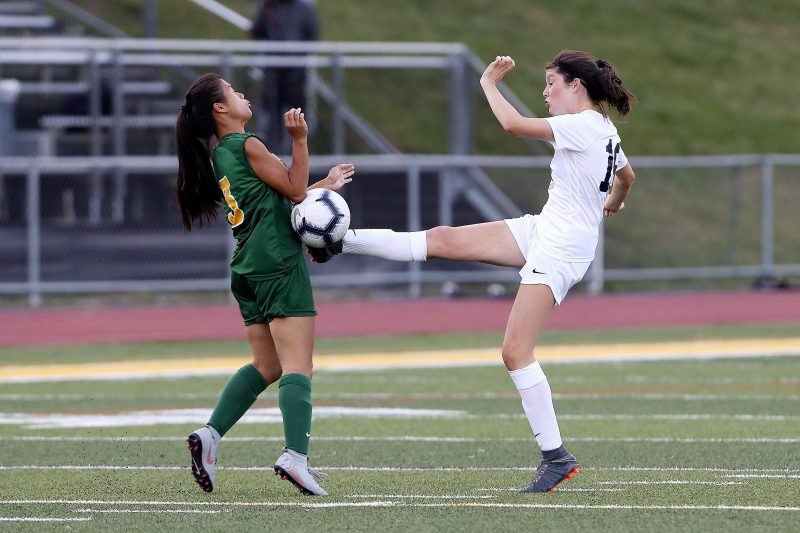 Lakeland’s HaiLian Rowan, a real bright spot this season, takes a stiff shot to the gut from Panas’ Molly Muller in the Hornets’ 3-2 triumph of the visiting Panthers last Tuesday.

There are good stories all about the Section 1 pitch, but Somers, where the reigning Section 1 champion boys’ program is back on course, and lady Tusker are making a splash similar to years past, is on fire.

SOMERS is shaping up as a legit Class A girls’ title contender, currently ranked No.5 in NYS. Coach Paul Saia’s Tuskers are 7-1-1after their 6-0 whitewashing of Walter Panas last Thursday. Somers scored two goals in the first half and broke it open with four in the second half. Tuskers Ella Kittredge and Jessica Rodriguez each tickled twine twice while Alexis Atkinson and Ilaria Adornetto also found the back of the net. Dahlia Pepe, Alexa Vanga (2A), Danielle Accocella, Victoria Righetti and Angelina Hurtado each set up goals, putting nine Tuskers on the score sheet.

“I do like the balanced scoring,” Coach Saia said. “It should make things more difficult for the opposing team. I would like to see us score more often, though. Last week was rough having three games in five days with two of the games going to OT. It would be have nice to have won all three, but Greeley was tough on us, as were both John Jay and Lakeland. The girls have been resilient though, and I’m extremely proud of them. We had the same situation this week, three more games in five days. We need to stay healthy and continue to strive to play our best soccer, which we haven’t done yet.”

In a 3-0 win over Briarcliff, Tusker Noelle DeMarinis said to hell with balance and scored a gorgeous hat trick, doing so off assists by Alexis Atkinson, Dahlia Pepe and Tori Righetti.

Currently, Magnus, ranked No.3 in NYS, is the team to beat in Class A, but tradition-rich Somers is right there with them as the only state-ranked team on this side of the Hudson (Pearl River No.9, Tappan Zee No.19).

MAHOPAC senior Jenna Daly scored the Indians’ lone goal with 17:37 left in the first half of a 2-1 loss to reigning Section 1 Class AA champion Arlington last Tuesday. The Indians put seven shots on goal and actually looked like the better team for much of the first half, but the state-ranked (No.6) Admirals are a battle-tested outfit, which saw sophomore Casey Stowell bury the game-winning goals less than 10 minutes into the second half, a half that belonged to Arlington.

The Indians (6-2) rebounded in Thursday’s 3-0 win over RCK when Grace DiVincenzo, Daly and Mia Klammer each finished their runs with a tally. Saturday’s 3-2 win over Scarsdale saw Klammer notch two goals and an assist, with another by Grace DiVincenzo. The goals were set up by Olivia Conlin and Daly.

Earlier in the season, UConn-bound senior DiVincenzo scored five goals in three games, including a victory over Class A heavyweight Rye.

Mahopac (6-2) should get on a roll with its next four opponents playing at sub-par levels. Mahopac will host rival Carmel this Wednesday (6 p.m.). Mahopac is hoping to put it all together and get back to a third Final 4 in four years.

SOMERS threw a hurting on WALTER PANAS in a 6-0 shutout. Tusker senior M Drew Lasher scored two goals, dished an assist and continued to look like one of the elite players in the section. Bennet Leitner and Joe Grippo each had a goal and an assist for Somers (8-1) while Michael Miceri and Derek Marques each had a goal. Jose Giron had two assists, and Evan Mazzola had an assist. The Tuskers followed that up with an 8-0 win over host Brewster Saturday morning. Mazzola had two goals and one assist and would have had the goal of the game if not for being off-sides on a gorgeous sidewinding kick. The Tuskers, who have won five in a row, saw Lasher add a goal and dish two assists to bring his season-best totals to 11G and 6A.

The Lickens brothers of Brewster were up against it in goal: Louis Likens (18 saves) and Joseph Likens (2 saves) were under fire. Ethan Kukaj, Sean Dickson, Zane Bramson, Bennett Lietner and Jacque Vera all scored for the Tuskers.

Through no fault of anybody’s, YORKTOWN hasn’t exactly kept the best scoring records over the years, but we’re here to tell you that senior striker Tim O’Callaghan is, in all likelihood, torching the record books with 17 points through Thursday (11G, 6A). We’re not sure about the actual record books, but we can’t recall a member of this program doing this kind of damage through eight games for the last three decades. O’C has emerged into one of the finest finishers and playmakers in the section while leading Yorktown to a 6-3 start.

“He’s doing a tremendous job of leading the team,” Assistant Coach Justin Huff said. “He’s a four-year varsity player for a reason; putting up monster numbers despite being man-marked and even double and triple covered at times because of our formation.”

LAKELAND did everything in its power to lock O’Callaghan off last Wednesday, which opened the door for Ciran Donohue and George Poppivic to notch a goal and an assist in the Huskers’ 3-2 win over Hornets. Husker Peter Tinaj added a goal and keeper Dylan Lopez made seven saves for surging Yorktown, winners of six in a row. Senior F Genti Gashi notched both Hornet goals, with assists coming from freshman Bryan Jaramillo and senior D Ryan Brannigan. Lakeland (5-3-1), one of the best-coached teams in the region, continues to improve while reestablishing its rich tradition during a rare down season (5-13 last year).

Lakeland’s 5-3 win over rival Panas (4-5) was largely on the back of senior F Augie Karaqi, who dialed up a career-high four goals for the Hornets. Jason San Lucas added a fifth while Bryan Jaramillo dished a pair of assists. Panas striker Tristan Phillips bagged a hat trick, scoring twice off PKs.

OSSINING’s Nolan Lenaghan has 16 goals and three assists for the state-ranked (No.8) Pride (8-2), which took a tough 3-2 loss to Greeley on the chin. Greeley’s Owen Parsons nailed a penalty kick with 1:51 to play, ending the Pride’s six-game winning streak. Kevon Evans gave the Pride a 2-1 lead, building on a goal from Lenaghan, set up by Evans. Word on the street is that Ossining didn’t go for the jugular after taking the lead, which is unforgivable against a program as solid as Greeley. The Pride need to play 80 minutes if they are going to produce a Class AA title with state-ranked (No.1) Mamaroneck looming.

HEN HUD won on the road in Poughkeepsie, 2-0, behind goals from Brandon Velasquez and Tyler Robinson. Gio Cardona came up big with game-winning shot in OT to get the Sailors (5-5-1) a 2-1 win over Lourdes Saturday.

MAHOPAC chalked up its third W of the season in a 3-0 whitewash of visiting RCK Friday and followed up with a fourth in a 6-1 rout of Mount Vernon. Against RCK, Mendim Berisha tallied twice and Bernardi added another for the Indians (4-6-1). Mount Vernon’s defense was porous, allowing free runs for the Indians to put them away early.

Soccer coaches are encouraged to email results and comments to raygallaghersports@gmail.com for inclusion in our weekly notebook (YOU owe it to YOUR players).