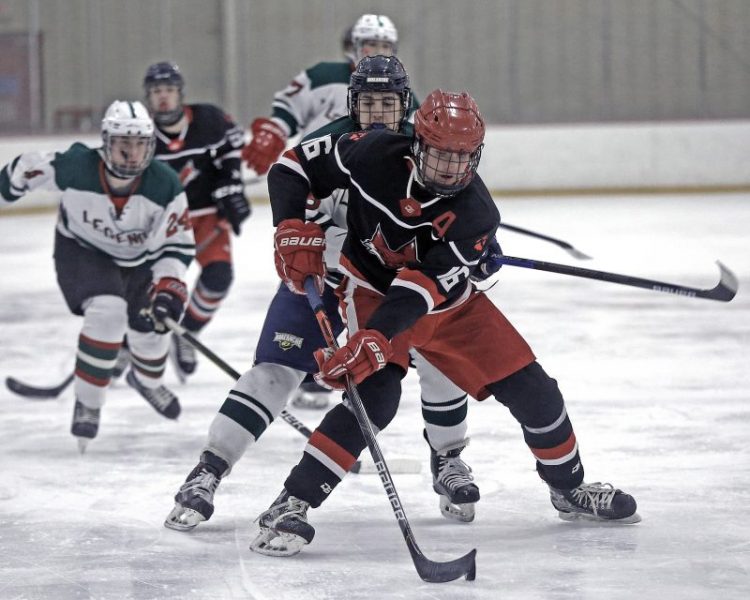 Fox Lane’s Adam Maiorano moves the puck up the ice in last week’s playoff game against the Rivertown Legends.

Against all odds on Saturday night, the Fox Lane hockey team tried to earn a playoff victory and keep its season alive.

But playing on the road without their head coach on hand and only nine skaters available proved to be too many obstacles for the Foxes. A goal by Ethan Pakola of the Rivertown Legends with 30 seconds remaining in regulation time broke a 4-4 deadlock and lifted the hosts to a 6-4 victory over Fox Lane in the opening round of the Section 1, Division 1 playoffs at the Westchester Skating Academy.

Pakola’s game-deciding goal was followed by an empty-netter from Anthony Cappello just 15 seconds later, assuring that the fifth-seeded Legends would be moving on to the quarterfinals while the 12th-seeded Foxes would have their postseason hopes come to an end.

“Big pressure situation, but it was a lot of fun,” said Fox Lane assistant coach Tom McGinn after taking the reins for the most important game of the season in the absence of Dan Mulvey. “I had a good time being there behind the bench calling the shots. With the short bench, we didn’t have as many options for what I was gonna be able to do anyway.”

Lacking enough skaters to run even two lines, McGinn and the Foxes faced a tall order against a Rivertown team comprised of players from five different schools and that had already defeated them twice during the regular season. But just over five minutes after the opening faceoff, standout senior Adam Maiorano got Fox Lane on the scoreboard first when he picked up the puck at center ice, moved to his left and sent a lefty wrist shot past Legend goalie Elle Schanzer.

The early Fox Lane lead lasted for just over a minute. Rivertown tied the score with 8:27 remaining in the opening period as Jacob Miller tallied on a power play with a straight-away slap shot from the point. Nearly three minutes later, Cappello put the Legends ahead with the first of his two goals.

The Foxes, who finished the 2019-20 season with a 10-11 record, managed to tie the score at 2-2 when sophomore Michael Gallary skated up the left wing and blasted a shot past Schanzer with 2:33 left in the first period. But 39 seconds later, Rivertown’s Daniel Reimer put a lefty slap shot past the Foxes’ Max Rauch that gave the Legends a one-goal edge heading to the second period.

Rivertown maintained its advantage until Fox Lane freshman Mikey Toole, assisted by Aaron Easton, converted in front with 2:49 to go in the second period. Just 65 seconds later, Maiorano provided his second goal of the evening, and the last of his Fox Lane career, when he skated in from the right wing, left a defender behind and then beat Schanzer.

But the Foxes’ second lead of the game lasted even less time than the first because Rivertown’s Braydon Kot collected a rebound right of the cage and buried the puck for a shorthanded goal that sent the teams to the locker room tied at 4-4 with 15 minutes remaining.

The last time the teams had met, a month ago, Rivertown needed overtime before prevailing 7-6. For a good portion of Saturday’s third period, it seemed the teams were destined for another sudden-death finish.

“It went back and forth for a few goals,” said McGinn about that regular-season encounter, though he could just as well have been talking about what he had just witnessed in the playoffs. “It ended up being a bounce off a player in overtime and they took the game from us. This was regulation, but at the same time you were playing that third period as if you were in overtime waiting for that next goal to win the game. And that’s what happened.”

In the third period, Toole was thwarted on a breakaway nearly two minutes in, and then Maiorano was stopped in front on another good scoring opportunity with 11:05 left in the game. The Foxes, with most of their players on fumes by now, stayed even as the game entered the final moments of regulation time.

“It was really difficult,” said McGinn. “Toward the end of the game, we were holding onto that timeout as long as we possibly could. 4-4 game, didn’t necessarily want to use it. But we were getting real tired. We were running out of steam. We needed a little bit of a breather.”

Unfortunately for the Foxes, just when it seemed inevitable the game would be decided in overtime, Rivertown’s Miller sent a cross-ice pass from behind the cage to the waiting Pakola, whose shot from right of the goal somehow eluded the diving Maiorano and whipped past the screened Rauch, who got his glove up a second too late.

With only 30 seconds left on the clock, the Foxes, who wound up getting outshot by a 32-16 margin, had no choice but to pull their goalie. Cappello’s empty netter 15 seconds later sealed the outcome and ended a Fox Lane season highlighted by a pair of three-game winning streaks.

“Even though the outcome, no matter what I say, is gonna sting, I’m proud of this group,” said McGinn, repeating the words he had just told his dejected team. “They worked really hard and they did a nice job this season. In the 15 years that I’ve been teaching here, this has been my favorite year being in the school district and it really has to do with what’s going on here with this group of kids in this locker room.”