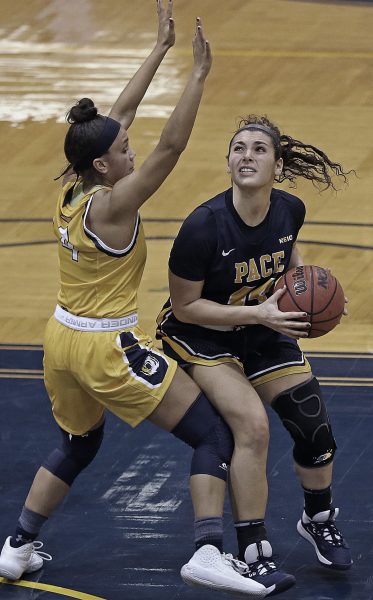 Pace forward Jackie DelliSanti tries to score inside
in the Setters’ win over New York Tech.

A year ago, Lauren Schetter and Jackie DelliSanti were the top two scorers for a Pace women’s basketball team that lost eight of its final 10 games to finish a disappointing 10-18.

To avoid a repeat of 2018-19, Setter head coach Carrie Seymour asked both frontcourt players to spend their offseason expanding their skills and reinventing themselves as offensive weapons other teams would struggle mightily to deal with.

“Jackie and Lauren, they’ve done a good job,” said Seymour. “Last spring, we told them that their goal was to play like big guards, not short forwards. And they did a lot of work this summer, and they both increased their range, they’re both more confident with their ball handling, and they’re tough matchups now. Prior to this, post players could guard them.”

Seymour had just watched as the two of them each made six of 11 shots from the field on Sunday afternoon and finished with a game-high 16 points, leading the Setters to a 57-41 victory over visiting New York Tech on the second day of the 2019 Conference Challenge at the Goldstein Fitness Center. Pace went on a 9-0 run over the final three minutes of the third quarter to break open a close game and improve to 2-0 this season.

“First weekends don’t really mean a whole lot,” said Seymour after the curtain had risen for her 28th season at the Setters’ helm. “It’s nice to win, it’s nice to get off 2-0, but it’s not indicative of how your season’s gonna go. Our conference is gonna be tough, it’s gonna be really tough.”

With the start of Northeast-10 Conference play still a week and a half away, Seymour at least has an idea now how much better her two returning forwards are. On Saturday afternoon, in the season opener, DelliSanti all but rendered previous scouting reports on her useless. She made 13 of 19 shots and wound up with a career-high 31 points in just 27 minutes of a 78-56 rout of Mercy.

“You know, she was very determined,” said Seymour of the senior from Long Island. “I think she caught them off guard. I think they scouted her off last year and she didn’t have the kind of range that she showed yesterday. She’s quicker this year, she’s in better shape. She just got on a roll and then things were falling for her and she just took advantage.”

On Sunday, DelliSanti and Schetter combined for a mere 12 points against New York Tech in the opening half, which ended with the teams tied at 23-apiece after the Setters were outscored 11-5 over the final six minutes.

“I think we went on a very erratic pace in the second quarter,” Seymour said. “We were forcing a lot of shots. I felt like we were getting out of position on defense. I think the excitement of the game, we’re tired from the day before, it kind of got to us and we weren’t really mentally involved enough. So I think the break at halftime was good.”

Schetter’s conventional 3-point play with 6:50 left in the third quarter gave the Setters a lead they never relinquished. A couple of buckets in the paint by DelliSanti in the midst of Pace’s 13-2 spurt to close the period left the Bears trailing 41-29 heading to the final quarter. Schetter’s put-back with 2:22 remaining in the game gave the Setters their largest lead of the day, 53-35.

The biggest highlight for the fans came with just over a minute to go when sophomore point guard Lauren Hackett delivered a behind-the-back pass to Iliana Krasniqi for a fast-break layup. It was the fourth assist of the game for Hackett, who only turned the ball over once in her 35 minutes on the court and figures to be a key part of the Setters’ new-look, fast-paced offense.

“She’s starting to understand how to play with more tempo,” said Seymour. “Last year, she played everything with one speed. You know, it was 100 miles an hour. Now she’s playing with more tempo and she’s picking and choosing when she’s attacking. She’s using her speed more effectively and it’s helping. We’re getting people the ball.”

When they took command against New York Tech in the third quarter, the Setters held the Bears to just 2-of-13 shooting from the floor. But even though Pace’s first two opponents struggled to make shots, Seymour is convinced the Setters’ fortunes in 2019-20 will be determined by what they do at the offensive end.

“We’ve got to score,” she said. “That sounds kind of obvious, but we have to really push the offensive tempo. We have to play like five big guards out there. Last year, we played a lot of grind and half court, too much back to the basket, and that’s not really gonna be our strength at all. But I feel like we can be competitive and I’m excited to get it going again tomorrow.”