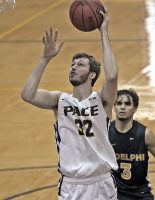 After their four-game winning streak was snapped on Wednesday night, the Pace University men’s basketball team returned to the Goldstein Fitness Center on Saturday intent to get back on track.

For a good portion of the afternoon, it seemed the Setters just might be able to.

But visiting Adelphi University overcame a nine-point, second-half deficit and wound up scoring the last 10 points of overtime to emerge with an 87-77 victory. Despite a game-high 19 points from junior forward Peyton Wejnert and a dozen assists by sophomore point guard Brandon Jacobs that gave him a share of the school’s single-season record, the Setters dropped to 15-10 overall and 9-8 in the Northeast-10 Conference.

“I feel like I wouldn’t expect anything different when we play them,” said Setters head coach Matt Healing afterwards about facing the Panthers. “It seems like every game comes down to the final minutes and overtimes and all of that stuff.”

The Setters, trailing Adelphi by a game and a half in the NE10’s Southwest Division at the start of the day, found themselves behind 9-2 just three minutes into the contest. But a 3-pointer by Ray Montilus midway through the first half tied the score at 19 apiece and Pace later used a 10-3 spurt to grab an eight-point lead. A 12-foot jump shot by Greg Poleon in the last 30 seconds enabled the Setters to take a 44-36 edge into halftime.

“Just a credit to our guys for the effort they put forth,” said Healing. “I thought that we stuck together through a lot of the game. They’re a really good offensive team, for sure. Lethal in a lot of different areas. I thought our guys did a great job of defending the majority of the game.”

Pace was able to build its largest lead of the day, 48-39, after a fall-away jumper by Poleon from the right baseline and then two free throws from Jacobs early in the second half. They were still leading by nine after Wejnert’s old-fashioned 3-point play with 12:32 remaining in the game. But Adelphi then outscored the Setters 21-7 over the next eight minutes, grabbing a 64-63 lead on a two-handed dunk by Denzel Jenoure with six minutes left.

A corner 3-pointer by Panther sharpshooter Jack Laffey with 3:45 on the clock left Pace suddenly facing a 70-65 deficit. Four straight points by Poleon, who finished with 17, brought the Setters to within one again and Jacobs was able to tie the score at 72 apiece when he banked in a shot while falling down just left of the lane with 49 seconds to go.

The Setters had a chance to win the game in regulation, but Jacobs failed to connect on a 3-pointer just before the buzzer and then again on a 27-footer after an inbounds pass from their own baseline with half a second on the clock.

“Difficult situation there because you only have the half a second,” said Healing. “We had an option to screen and get a lob at the basket and we had an option for a guy coming off a screen out to the wing there. It is what is. Maybe more time could’ve been put on the clock.”

In the five-minute overtime, the Setters were able to tie the score at 74-74 on two Jacobs free throws and again at 77 apiece on a 3-pointer by Tyrone Cohen, Jr. with 2:50 remaining. But the Setters never scored again and Adelphi went ahead for good when Austin Beech drove through the lane for a layup as the shot clock was about to expire with 95 seconds to go. The Setters wound up making just one of their 10 shots from the field in the overtime session and Adelphi sealed the outcome by going 8-for-8 from the line in the final moments.

“Once we got down to crunch time, I just wish we executed a little bit better,” said Healing. “I didn’t think we executed well enough. We missed two shots that we normally make to start the overtime.”

The Setters had lost by 10 points when they faced Adelphi on the road back in mid-November and Healing predicted the rematch would be an extremely tight battle.

“I told my guys this was gonna be a game of inches,” he said. “That was the thing we wrote on the board today and I felt like this is a game we lost by an inch or two. This was a nip and tuck game and just didn’t go our way. I’m just so proud of our guys and the way they’ve fought throughout the season. We clinched a postseason bid tonight even with the loss, which says a lot about where we’ve come from and what we’ve been trying to do.”